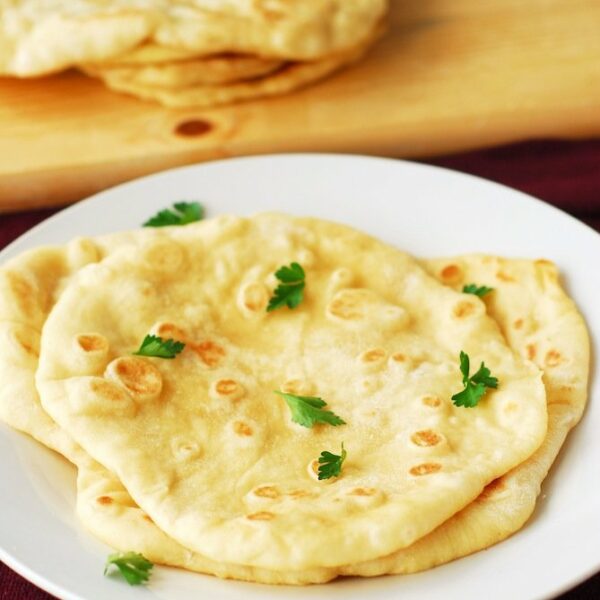 I’ve been cooking a lot of Indian and Middle Eastern inspired cuisine in the last few months. Like a lot. Like suddenly various curries make an appearance on every week’s menu. Before we came to Cape Town, I hadn’t even stocked my spice drawer with spices like turmeric and curry powder, let alone delved into dishes like Tikka Masala.

Even though most of these dishes have thus far been comprised of meat, rice, and occasionally vegetables, I knew that naan and other flatbreads were in my baking future. Grocery store naan is always so dry and disappointing.

Homemade naan, though. Homemade naan is… magical. “Yummy” just doesn’t cut it here. It’s more than that. Homemade bread is always better and this flatbread is no exception. It’s made with a bit of yogurt and gets brushed with a little ghee (clarified butter) for supafied deliciousness. Yes, I’ve resorted to making up words in order to to truly describe what this naan can do for your life.

If you’ve made your own bread before, this’ll be a cinch, and even if you haven’t it’s still a very easy recipe to follow. The dough starts with the standard yeast-sugar-warm water mix, then gets ghee, salt, yogurt, and flour added to it. Easy, peasy, lemon squeezy.

Then after some kneading (I know, I know, the worst part of baking- but it’s worth it) and some rising, you divide the dough and roll it out into eight inch discs. I don’t have a rolling pin here, so mine are a little lumpy and lopsided. It’s okay. They’re still tasty.

Aaand no more rising! Note: don’t be like me and just stack these on one another. Put some paper between them or lay them out. Otherwise, they’ll stick to each other and you’ll be super annoyed because you have to re-roll them. Boo.

Brush some ghee on the naan pieces with a very heavy hand. Then just grill ’em, broil ’em, or fry ’em. It’s totally up to you. The broiler on our oven doesn’t get all that hot (or at least, it takes ages to, and I have no patience) and we don’t have a braai (grill, in local Afrikaans!) so I panfried and it worked perfectly.

I have no shame and will admit that we had no trouble gobbling up all six between us with dinner. Because, as I said, they are magical. 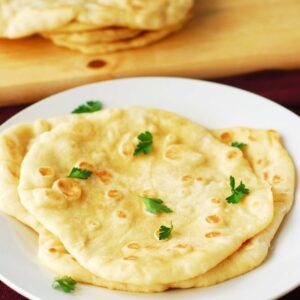 Here are some dinner ideas to go with your naan!

Chicken Tikka Masala! This might be my new favorite food. I mean it.

Chicken and Pineapple Curry. Tropical and all things yummy.

Citrus Spiced Chicken. This chicken helped me discover a love for chicken thighs I didn’t know I had.

Bread Side Dishes 30 Minutes or Less