Last week we went on a mini-road trip up the West Coast of South Africa. It was truly fantastic. I say mini because we started our road trip at 8 a.m. on Wednesday and got home at about 6 p.m. on Thursday. Fiancé and I really like doing trips this way because we have just enough energy to go nonstop for two days and we save money on hotels, meals, and potentially gas. We took this approach to our trip to Gauteng, our safari, a quick jaunt up to Vancouver Canada last year, and our trip to Victoria Falls, although we did spend two nights there. Remember when Fiancé proposed in Vegas? That trip happened like this: Fiancé had a three-day weekend. I got off work at 3 p.m. on Saturday, our flight left for Las Vegas from Portland at 6 p.m. that night. I had to work on Tuesday at 2 p.m., so we flew home at 9:00 Tuesday morning. Needless to say I was exhausted, but it was totally worth it, especially because I went home with a gorgeous ring on my finger. Oh, and with the excitement of getting married to Fiancé, of course.

Anyways, these quick trips do real well for us, and we know we’ve got to do as many of them as possible until babies come along. Because then quick trips will definitely not be an option.

The key to a successful “quick trip” is planning a loose but detailed itinerary. Loose, because a lot of times things don’t go as planned and you gotta be okay with ditching an activity or two. Detailed, because you really should try to pack as much as possible into the time you have to make the trip worth it. Unless it’s a relaxy trip, then just bring lots of wine and stare at the beach.

The drive from Cape Town was not what I expected it to be. There was almost no civilization once we got outside of Paarl until we reached our destination. There was a thunderstorm to keep us entertained, though. Have I mentioned how stressful driving in South Africa is? Pretty sure I have. Pair that with a thunderstorm, and I’m a ball of backseat-driving anxiety until we’re parked.

Our first stop was to Paradise Beach in Langebaan. Fiancé picked this stop based on a little Google Maps perusing but didn’t actually research it. It turned out that we had to go through a casino’s private property and then through a gated community to get to it. For whatever reason, all the security guards we passed let us through even though we didn’t live there and weren’t staying in any guest lodges. Confused, we just looked at all of them and said, “We were hoping to go to the beach…?”

When we finally got there, we agreed it was well worth the extra effort. It was truly a gorgeous beach and it was completely empty. The storm hadn’t quite caught up to us so we got to walk around for a while before heading back to the car. I got some of the best shells I’ve seen yet here!

Based on some Googling I did (beyond Google Maps, luckily), we went to a restaurant called Pearly’s for lunch. It’s one of the oldest restaurants in the area and it sits right on the beach. We sat on a covered patio and watched the fishermen and kite surfers while we enjoyed our sandwiches. It was really, really nice.

After lunch, we headed to our next destination, the West Coast Fossil Park. When we pulled up it was clear that we were the only people there, which concerned me a bit. We signed up for the next tour to the dig site and looked around the lobby while we waited.

My fear was unwarranted: the tour was awesome! A guide came and we drove down to their real, actual dig site. The area they were working on was covered by a tent that held a huge pit full of bones. Seriously, just full of a mishmash of old bones. We saw the bones of extinct short-necked, long-horned giraffes and elephants that had four tusks. We saw vertebrae from a whale (they were huge!). We even saw bones from an African bear! Which I did not know existed.

After the tour of the dig site, he took us back up to a room where they sifted through soil and looked at bones more closely. We saw the tooth of a Megadalon, a crazy giant shark, which was terrifying. We learned about why fossils are different colors.

Then we went into their museum room with lots of bones. We saw the skull of an African bear and a sabre tooth, along with plenty other animals like elephants and giraffes.

If you happen to be in this area, I highly recommend a stop at the West Coast Fossil Park! We learned so much more than I wrote here, but it’s way more interesting to go see it yourself instead of reading me blab on about bones. I was too excited to take a lot of pictures, but check out this blog post from Geogypsy Traveler to see some!

From here, we headed to the room we were staying in to check in. It was at a little house called Bavania Beach Lodge in Jacob’s Bay (also known as Jacobsbaai, the Afrikaans translation). Our room was set up so that the kitchen was right at the entry, but bedroom, living area, and bathroom were lofted above with an incredible view of the ocean. It was perfect. This was our view: 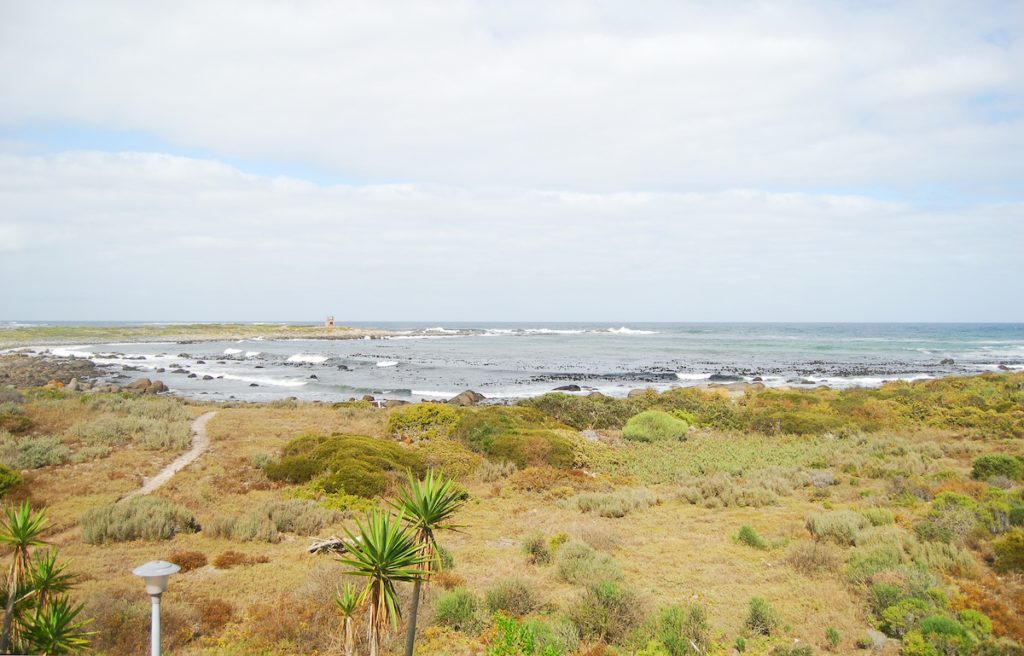 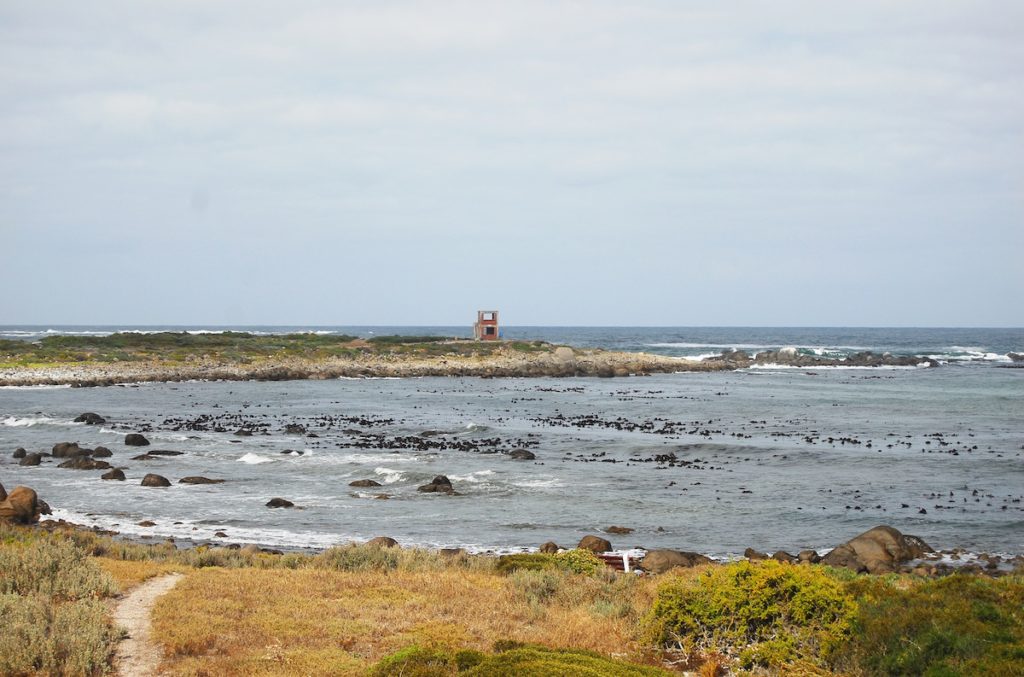 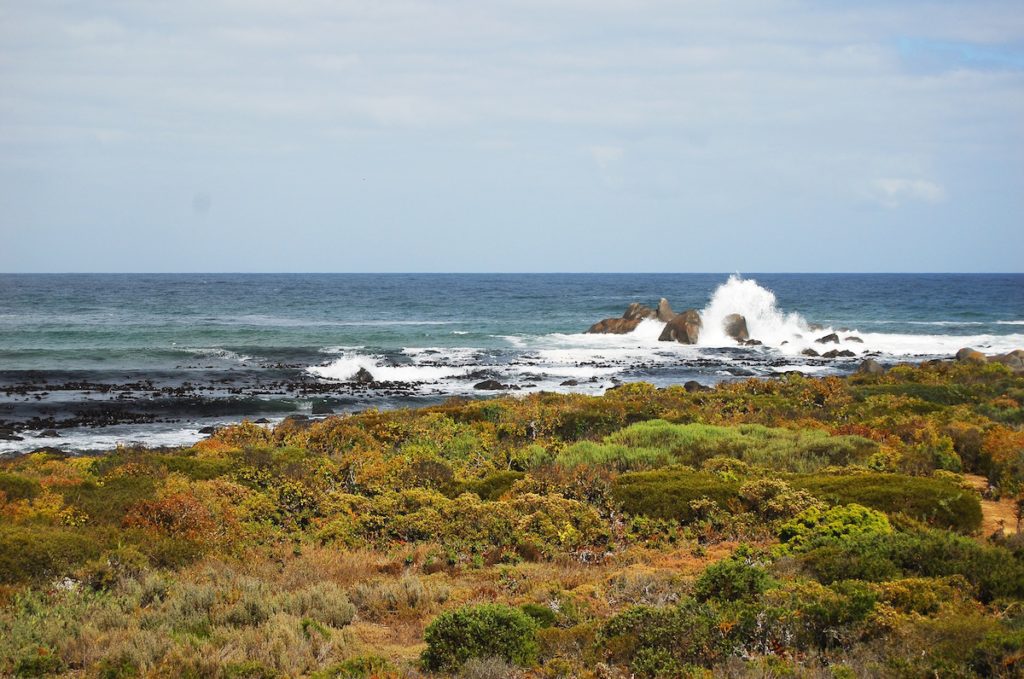 Jacob’s Bay is the definition of quaint. It mostly consists of little white, Cape Dutch-style houses dotting the coastline. There is one little grab and go store and one restaurant, owned by a well-known South African musician. Which we of course went to. The restaurant sits right on the bay and the dining room has an excellent view. We were first spoken to in Afrikaans by the manager and our server, which is different from the usual first approach of English that we get in Cape Town. Luckily, nearly everyone is at least bilingual, many trilingual, to make me feel plenty guilty about not having paid attention in Spanish class. My only complaint: for some reason, the first half of the menu was in English and the entire second half was in Afrikaans. It wasn’t just a separate translation, either; half of the dishes were listed and described in Afrikaans. This was a bit of a bummer because I didn’t particularly want pizza (even though it was great!) but I didn’t feel comfortable asking a server to read the entire second half to me.

The next morning, we headed out bright and early to poke a little further north before heading back down to Cape Town. We went to Paternoster where they have a gorgeous lighthouse in the Cape Columbine Nature Reserve. The reserve was beautiful and the lighthouse gave us quite the view. We had to climb ladders to get to the top, which was a little scary for my incompetent self. 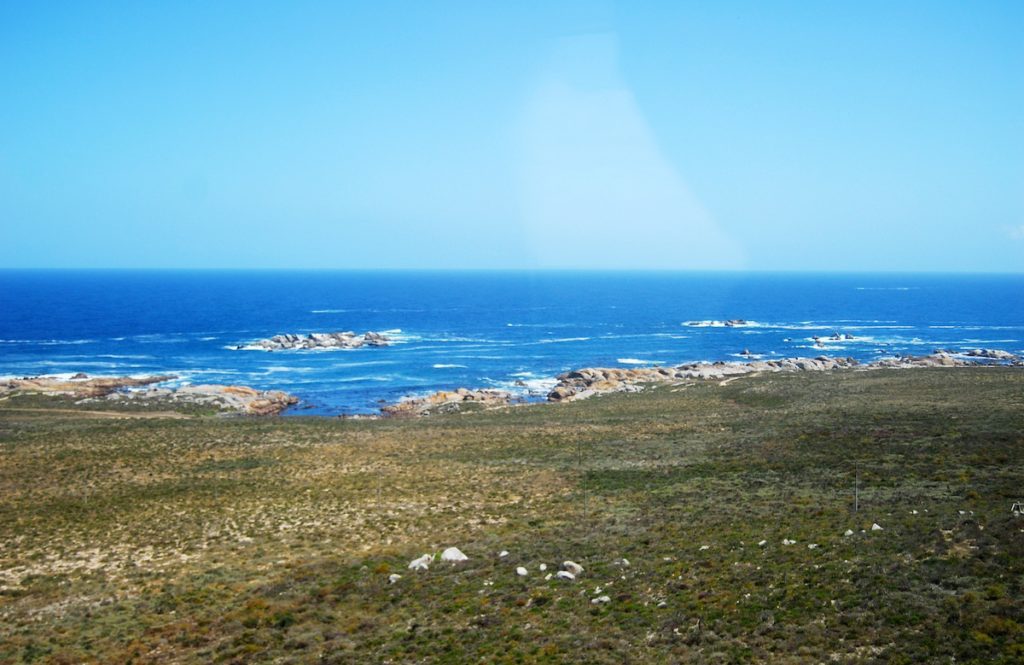 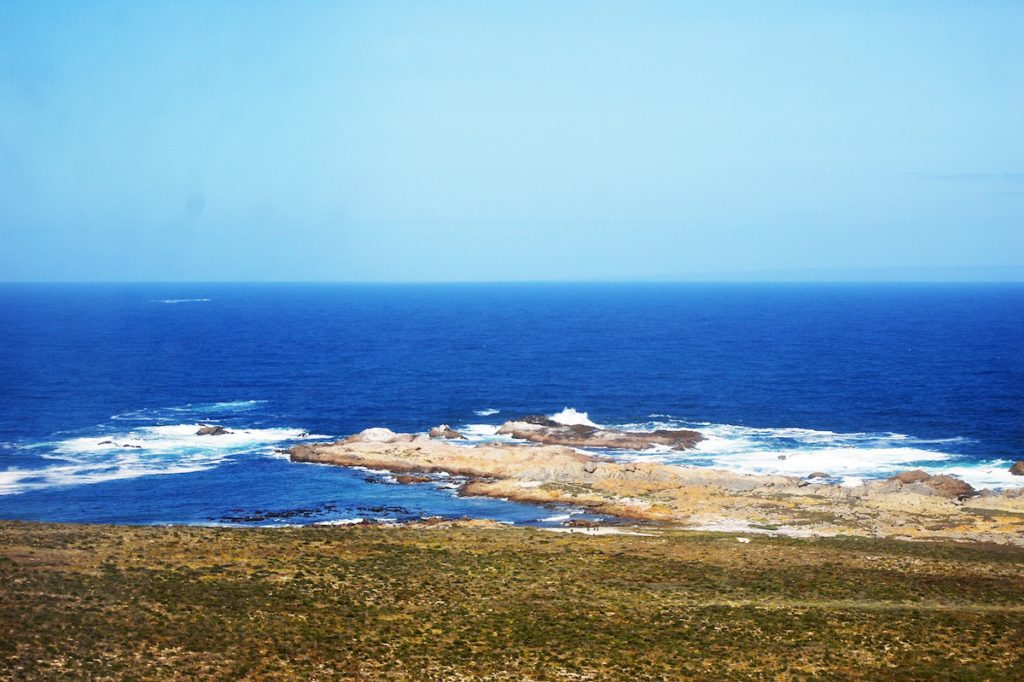 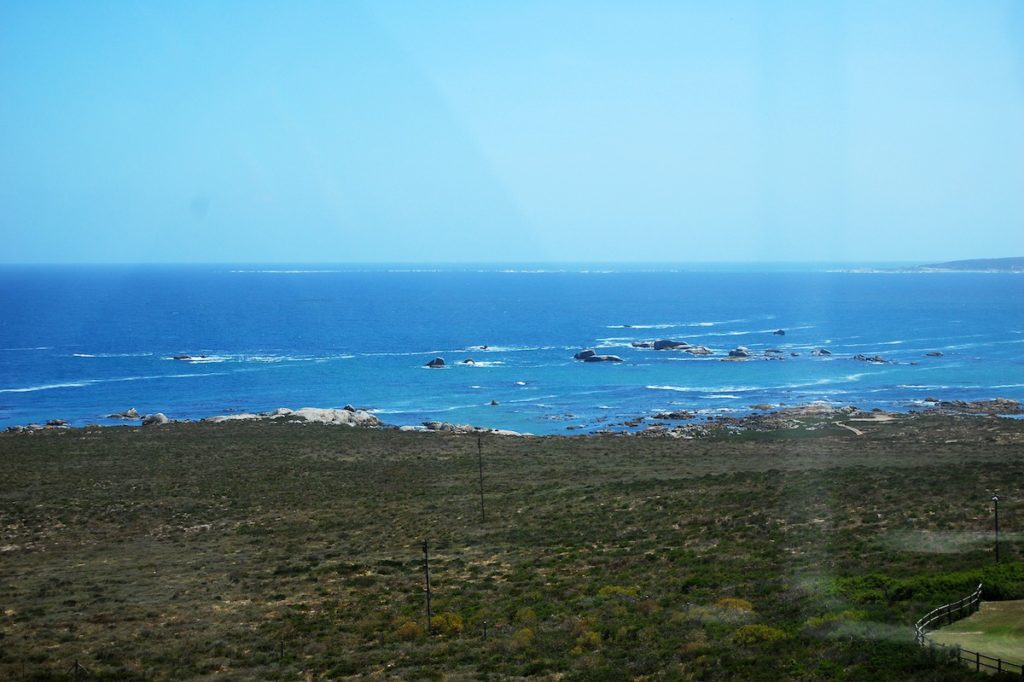 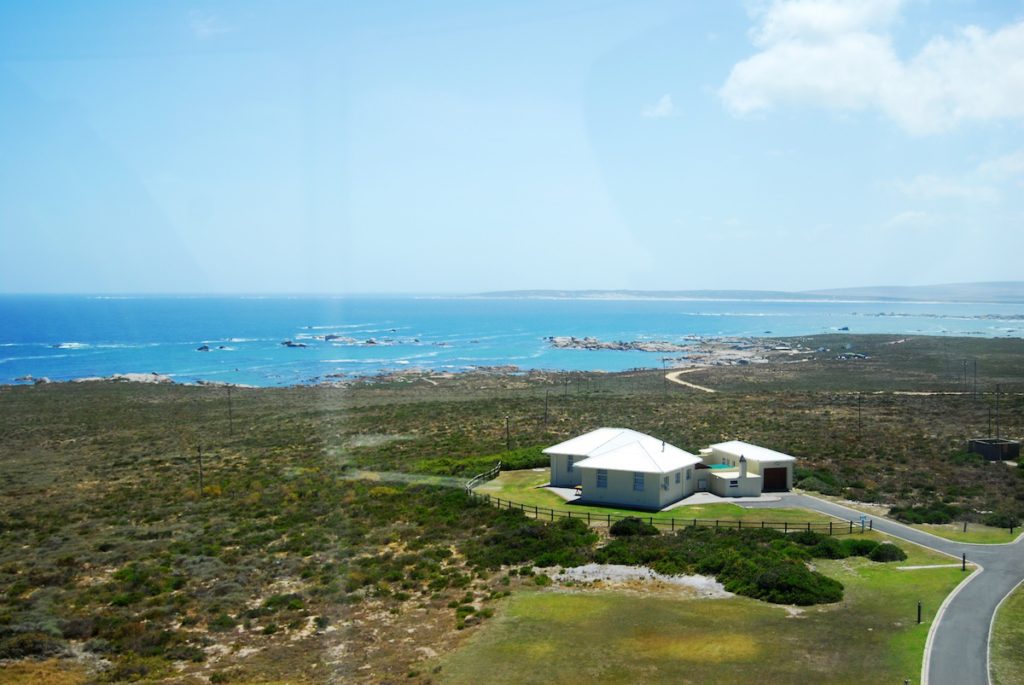 After climbing down (which was definitely scarier than going up) we drove to one of the many beaches in the reserve. I don’t think I’ll ever get over the feeling of being at a beach in South Africa. Each one is staggeringly beautiful, whether it’s the seclusion and boulders of Llandudno, the 12 apostles in the background of Camps Bay, or the foamy, turquoise water at this beach. You’re great Oregon, but your beaches have nothing on South Africa’s. Even Cancun can’t touch this, and we went there just for the beach. 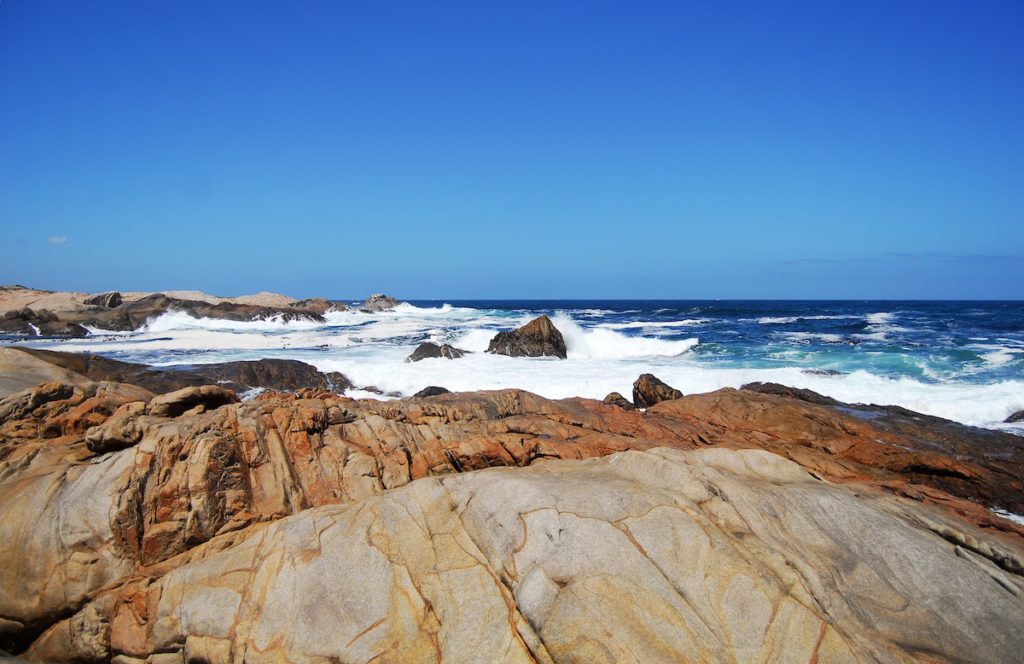 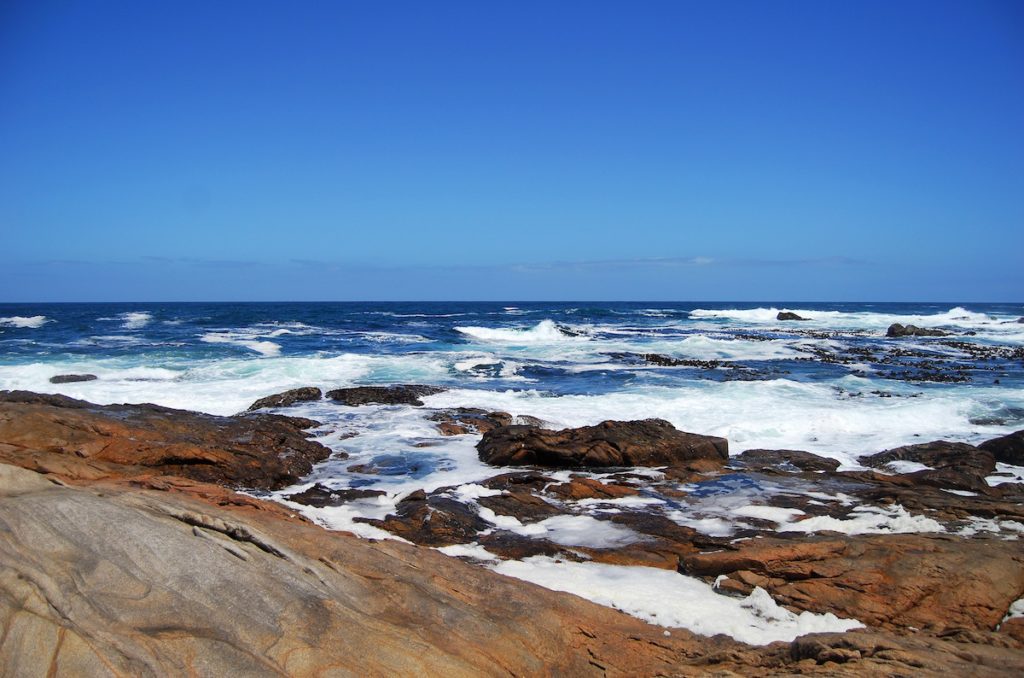 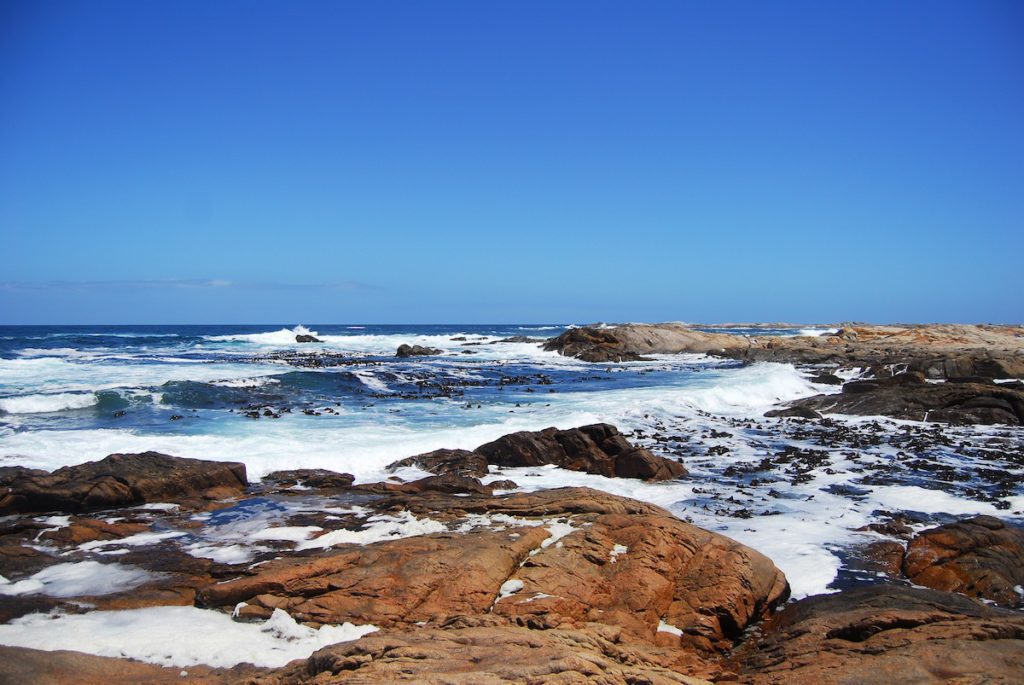 Our last stop before the drive back to Cape Town was at a little restaurant called Blikkie Pizzeria. It’s built into a centuries old tin fishing shed. They have a wood-fired oven that cooks up some incredible pies. We ate them outside while enjoying the sunshine and a perfect view of the beach.

All in all, it was a really great trip, and I’m glad we got to spend that time just soaking up the beauty of this incredible country. We leave three weeks from today and it’s really starting to hit me hard. I’m both incredibly excited and anxious (these words don’t do my emotions justice- MOM I MISS YOU SO MUCH!) to see my parents and heartbroken at the prospect of leaving this place and not coming back for a very long time. South Africa is unlike any country in the world because of its breathtaking geography and wildlife, culture and history, and people. There’s something I can’t quite describe about being in such a vibrant and diverse place. Cape Town has carved a big place into my heart and it really bums me out each time I think about how inaccessible it is from Portland.

Okay, okay, I’m done. Sorry to all of you lovely people that read my posts over the next few weeks, but there are going to be a lot of long rants about how much I love South Africa!