SA Sunday: A Day in Rondebosch 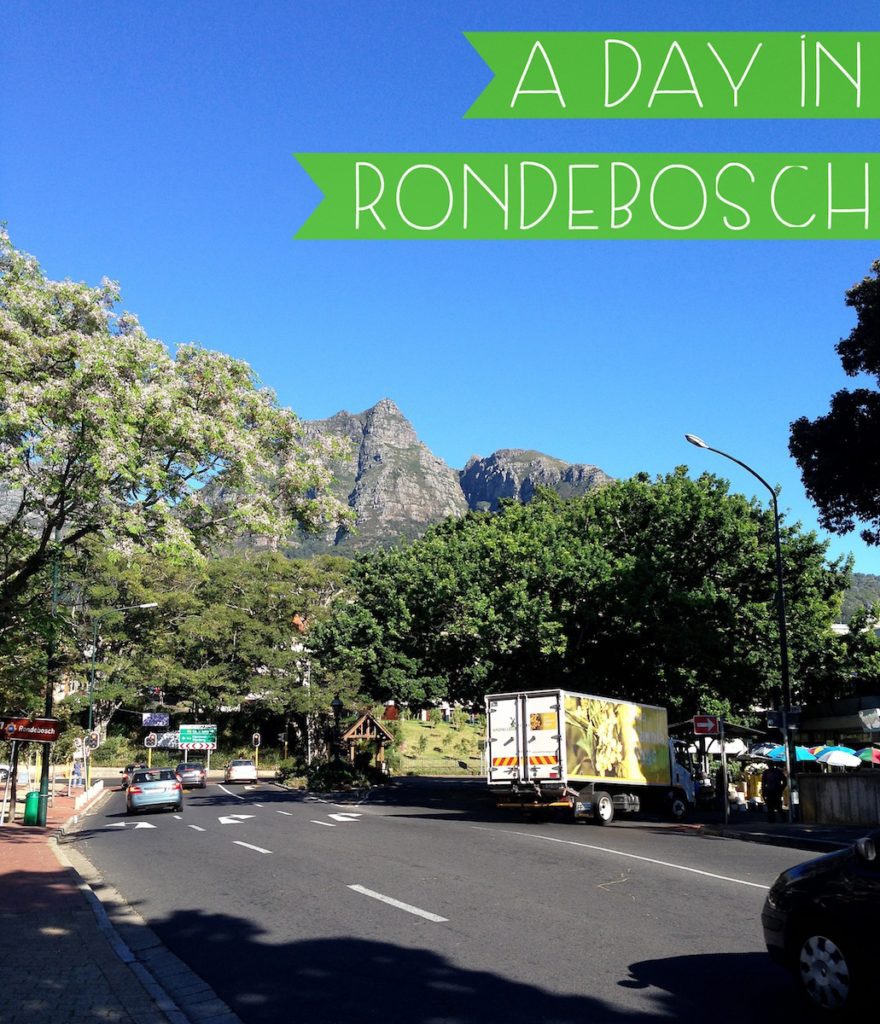 This post is LONG overdue, especially considering the fact that we’ve been living in our wonderful South African neighborhood of Rondebosch for almost eight months. <<< WHAT?! That still doesn’t feel right. This post is mostly for our moms who really care about the minutia of our lives, but you might find it interesting, too, especially if you’re curious about what day to day life is like ’round here, not just safaris or gorgeous beach after gorgeous beach.

Okay, let’s establish some context. We live in what is known around here as the “Southern Suburbs”, about a 15 minute drive south of what you’d call “downtown” Cape Town. We chose this neighborhood because Fiance can walk to his school, the University of Cape Town (UCT), and other reasons you’d choose a place to live, like it’s regarded as a safe and friendly neighborhood. The neighborhood’s history was powerfully shaped by apartheid. Under the Group Areas Act during apartheid, Rondebosch was declared a whites-only neighborhood. See that mountain-y thing in the picture above? That’s Devil’s Peak, a part of Table Mountain National Park. We live right in the main commercial area of the neighborhood, which is awesome because the grocery store and my little gym are only about 500 feet out our front door.

We live in a really, really big complex that’s only a couple of years old. We ended up here through UCT’s website. Most of the other people who live here are also students. This is just one corner of our giant building: 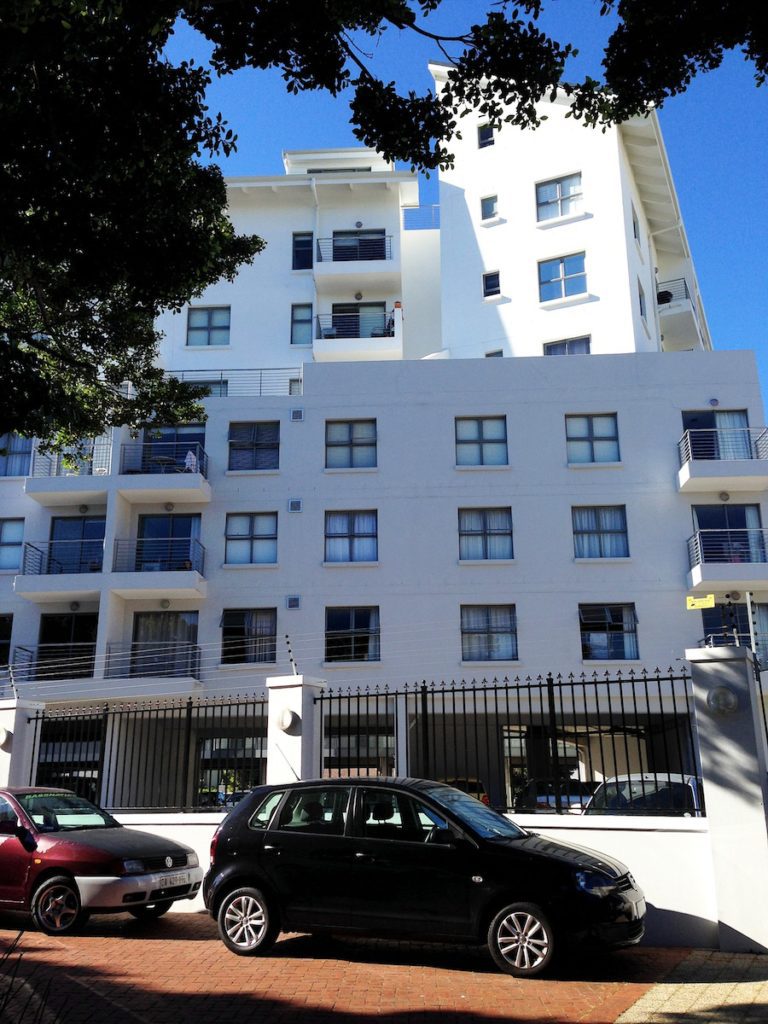 Among many other things, one huge culture shock for me when we got here was the intense level of security people put around their homes. Just look at that fence around our complex! Not only is the top spiked, but there are six lines of electric wire. To get into our building, you have to use a fingerprint scanner: 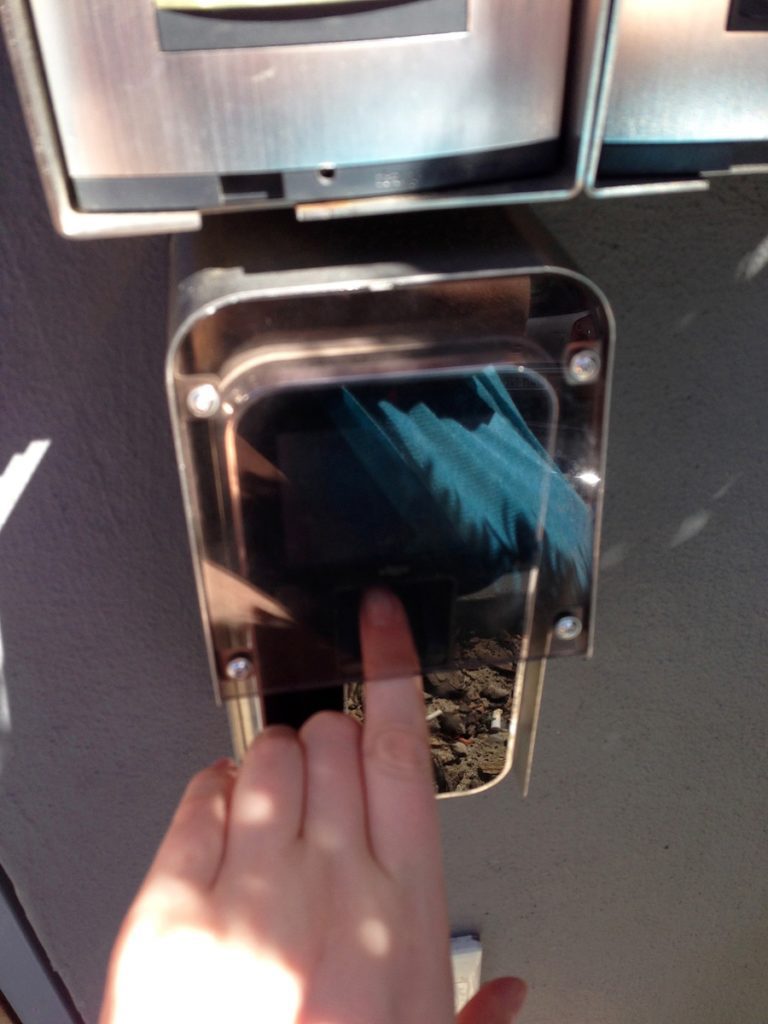 Excuse the blurry picture, I had a heavy bag of groceries in my other hand. After the fingerprint scanner, you walk into the lobby with a security desk that’s manned by two security guards 24 hours a day. From there, I walk to a door to a stairwell that has yet another fingerprint scanner, then up to our flat. Our flat has bars on all the windows and doors and a phone that we can use solely to communicate with the security desk.

And this isn’t unusual. In fact, most of the complex’s in our neighborhood, also occupied largely by students, feature similar intense fencing and 24 hour security guards. Stand alone homes feature fencing with at least spiked tops and often electric wires along with signs warning intruders that they have a security system.

South Africa’s private security industry is the largest in the world. There are more registered security guards than the South African police and army combined. Security is provided in the form of big security companies, like ADT; neighborhood-watch-type organizations; and self-employed car guards, who watch your car when parked in a public area in exchange for a tip when you return. This level of investment reflects widespread fear of violent crime in South Africa.

Yes, there is a lot of crime in South Africa, but for the most part, this crime is not taking place in the Southern Suburbs. Even in central Cape Town, the crime that is taking place is the type of crime you see in most big tourist cities: cars being broken into, purses being stolen, tourists being preyed upon.

Although apartheid has been formally disbanded for twenty years now, its effects linger. Under the Group Areas Act of apartheid, much of Cape Town was deemed a whites-only area, making it illegal for non-whites to live there. Instead, non-whites were “relocated” mostly to what is known as the Cape Flats, made up of several townships. Although the government has made an effort to install more formal housing in these townships, you’ll still mostly see houses constructed of tin. It’s these low-income peri-urban areas that are most affected by South Africa’s crime. Remember how I said apartheid effects are still lingering? By that I mean now-integrated neighborhoods like Rondebosch are only 62.7% white. Khayelitsha, a local township, is 0.1% white. Cape Town is 15.7% white.

Those kinds of statistics remind me that South Africa is an incredibly unique place. I live in a bubble here in Rondebosch. In many ways, South Africa is just comprised of a bunch of socioeconomic and cultural bubbles. The process of integration is still in relatively early stages.

Alright, back to my Rondebosch bubble. Most mornings, I start my day off with a trip to the gym. During this short walk I get to see the local library from inside our complex, a gorgeous, old piece of Cape-Dutch architecture.

From the little parking lot outside our complex, I can see Devil’s Peak peeking out from some of the trees planted along the streets. 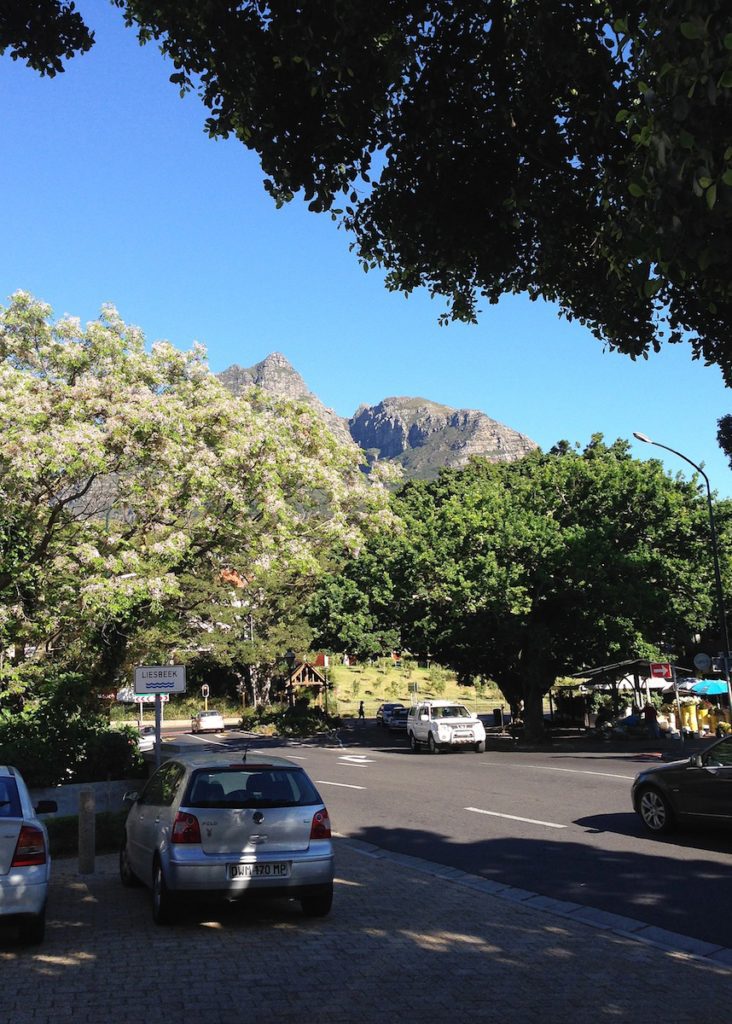 I jaywalk across the street as safely as I can, as is the custom around here, and walk past a little flower stall setup and the 5 Rand store (that’s equivalent to about $.50). 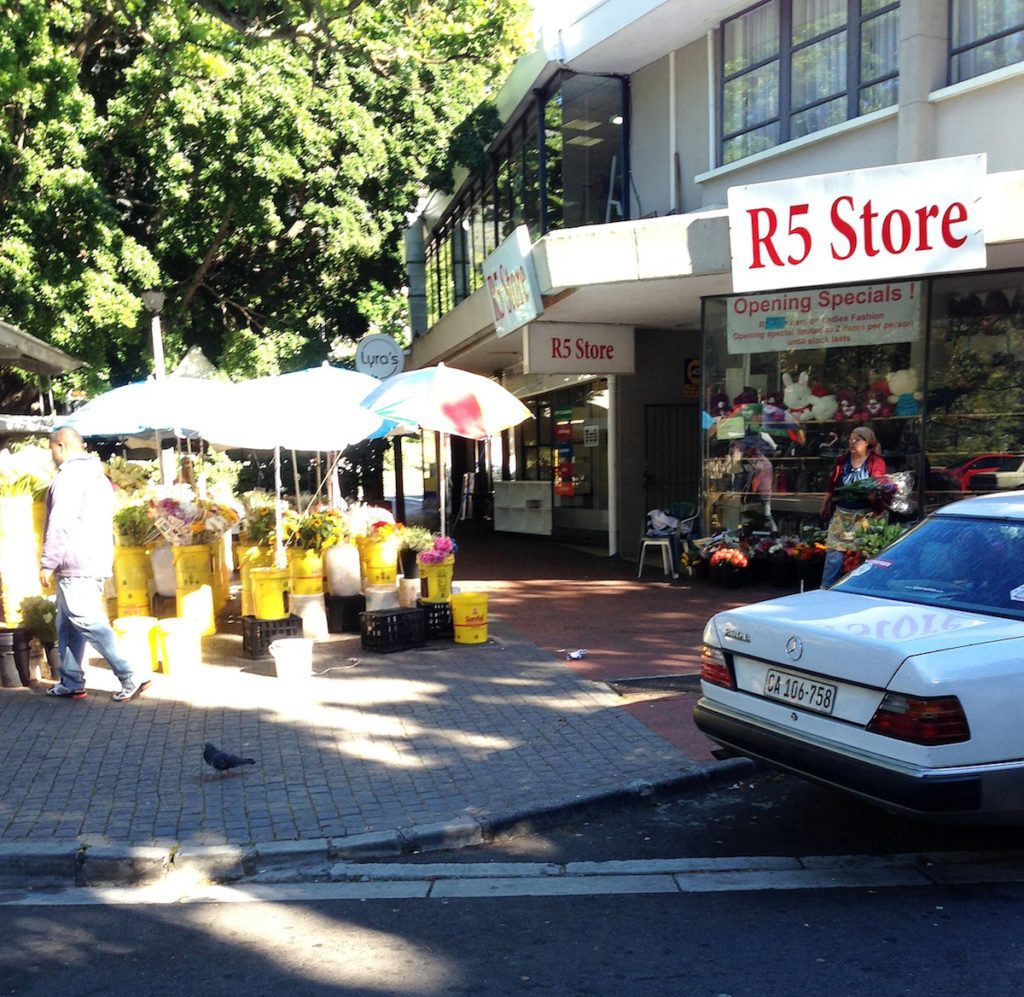 Then up to my gym, which I quite like. I especially like the incredible views I get to enjoy from my treadmill. 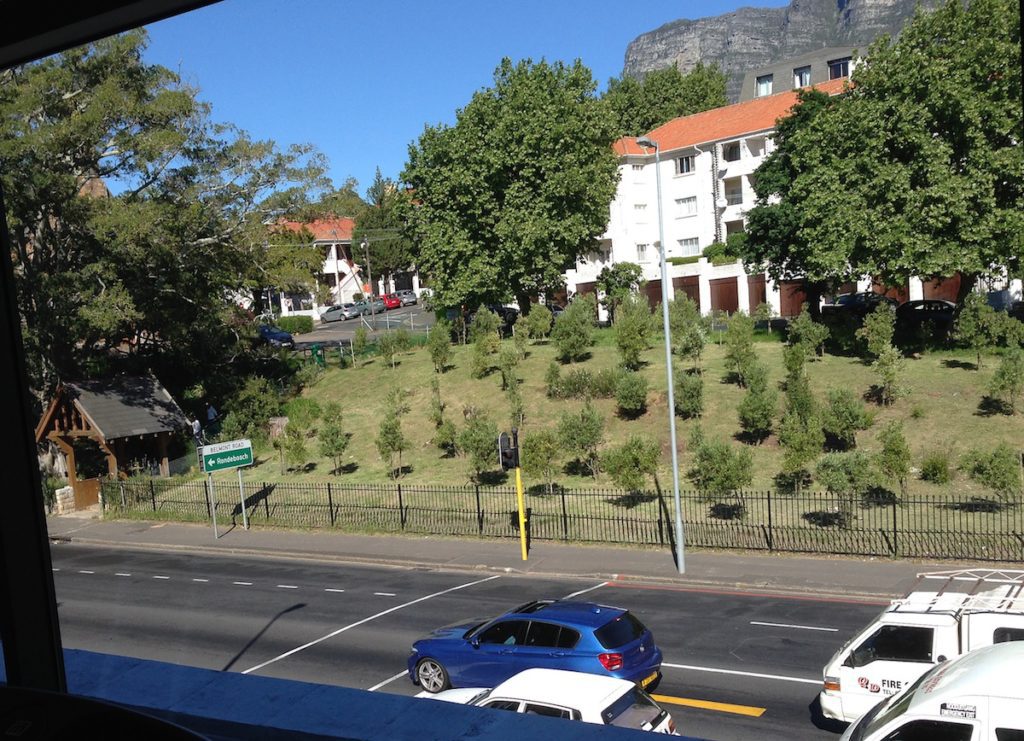 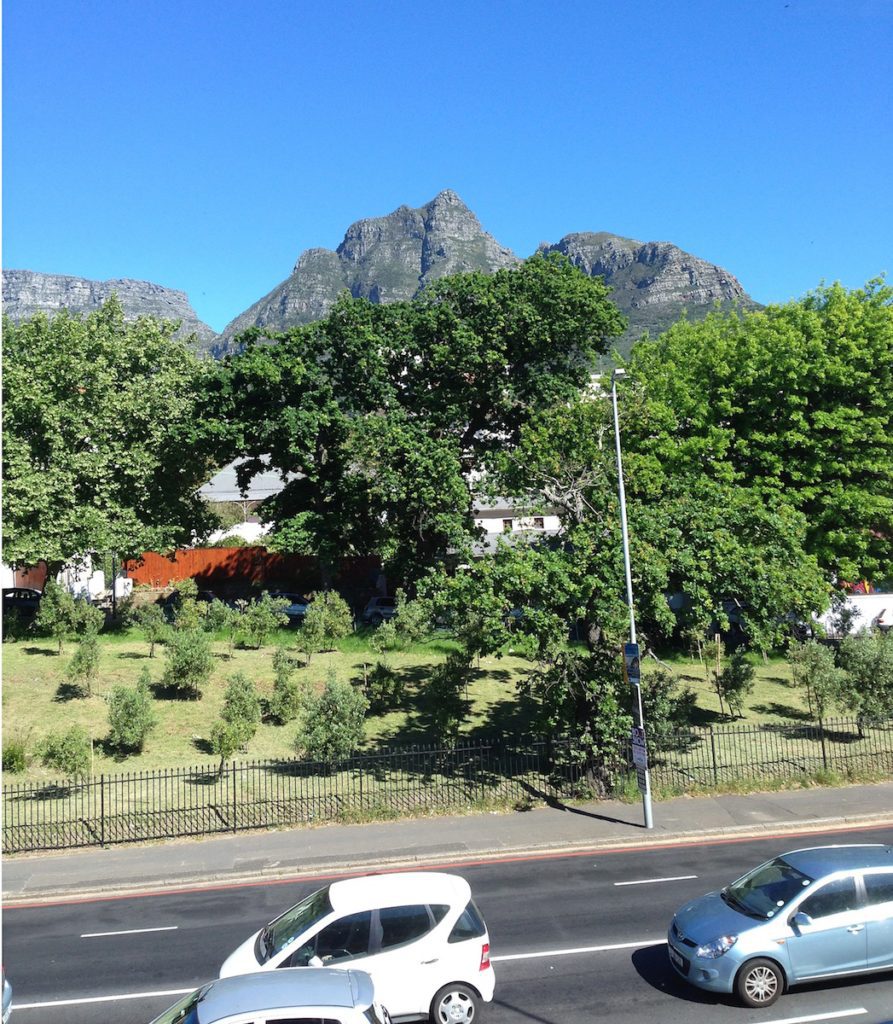 We’ve become attached to a little restaurant in our neighborhood called Lyra’s. They have a really nice outdoor seating area that has two TVs setup, so we’ll often go over there to watch rugby and cricket. In fact, the last time we went we paid R5 to enter a pool to correctly guess the score of a rugby match, and yours truly went home with the loot! I’m a rugby master, in case you didn’t know.

The public transportation setup in Cape Town is frankly kinda not good. I come from Oregon, the land of bikes, pedestrians, and a pretty comprehensive public transit system, so living in a cars-only city was a bit of an adjustment. There are a lot of people who walk, and they literally weave between cars in the middle of the street. This was so incredibly stress-inducing for me when we first came, but now I’ve learned to do it myself. Still more safely than residents of the neighborhood, though. You might spot an occasional bicyclist, but there are no bike lanes to be found here.

The train and bus systems are improving and getting more attention, but they’ve still got a long ways to go. Since many people commute from the townships on the outskirts of the city into Cape Town and its suburbs, a mini-bus taxi system has popped up to fill this need. These aren’t your traditional cabs. Traditional taxis are here, too, in fact we take them regularly and it’s an adventure.

And as a hyper rules-conscious, polite Oregon driver, these taxis drive me absolutely nuts. They’re great in many ways, because they can affordably transport several people at once and are a great small business for the driver. But. For me, one of the most stressful things about living in South Africa has been driving. Drivers here treat the rules of the road more like guidelines and are more likely to practice risky maneuvers to get from point A to point B more quickly than at home. These taxis just have a whole different set of rules they choose to follow. First, people are constantly yelling the taxi’s destination out the window, supposedly for the benefit of those walking on the sidewalk who may need some transportation. In our neighborhood, we constantly hear taxi drivers yelling “WYNBERG!” and whistling and honking, adding to the sense of chaos that is South African roads. Sharing the road with the mini-bus taxis is even more difficult. They frequently stop in the middle of the road with little warning to pick up and drop off passengers, change lanes or swerve into neighboring lanes recklessly, make random u-turns, and run lights. My safe-driving self just cannot deal with this, which is why Fiance drives most of the time and I stare wide-eyed at the road, clutching the door and pressing my imaginary brake.

ANYWHO. To combat the lack of public transportation and make sure we see the city, we’ll occasionally use traditional cabs. It’s incredibly inexpensive. A ride to the airport, which is well-outside the city, is about R170, or $15. A cab ride from our apartment in Portland to the airport, about the same distance, is at least $35. It’s great to be able to use them so affordably because there is a lot of good wine to be had in South Africa, and if we know we want to indulge a bit, we can safely take a cab to and from.

Most of the time, though, we have a rental car that we use. I HIGHLY recommend renting a car if you visit South Africa. Cities like Cape Town and Johannesburg are sprawling and driving is the only way you’re going to get to see all that these cities have to offer. We’re using a long term rental company that gives good deals to students, and although it’s very affordable, the cars are… special. Very old Mercedes, typically. They will run, but they just struggle with things like hills. And being idle at stop lights (called robots here, which is AWESOME). This is our current beaut: 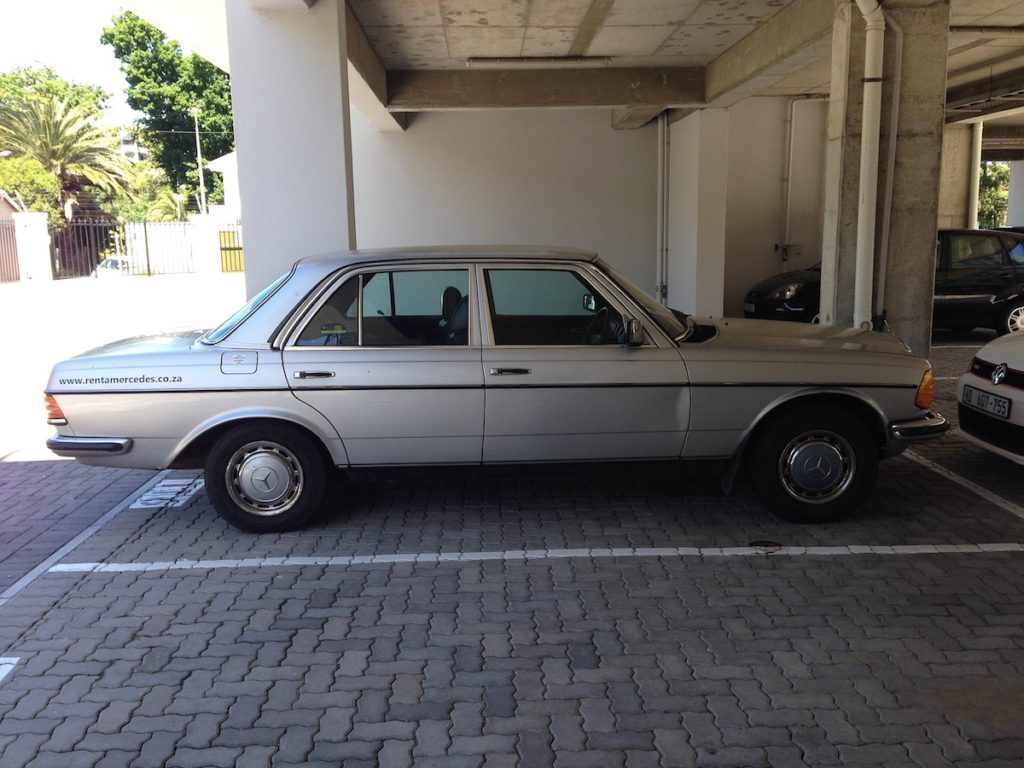 Overall, I absolutely love our neighborhood and am so glad we chose it. If you’re going to be a student at UCT, I highly recommend this area! Grocery stores are easy to get to, it’s right next to highways so you can get to and from the city easily, and you can walk to campus.

Rondebosch has some incredible things to offer, including Rhodes Memorial, which I wrote about, and the University, also featured in a post on this blog. Thank you for indulging me by reading about the many things I love about Rondebosch!

5 comments on “SA Sunday: A Day in Rondebosch”