posted by Chelsea Cole on September 14, 2014
This post may contain affiliate links.

Fiance and I saved enough cash for one other adventure in Africa during our stay in Cape Town. After some serious thought and maybe a little debate, we ended up deciding to go to Victoria Falls (posts to come!) because it would allow us to see to more African countries, Zimbabwe and Zambia, and the falls are one of the most gorgeous natural landmarks in the world.

On our way there we had to fly out of Johannesburg, so we decided to make the most of it and spend a night there and see a few of the sights. Fiance had the foresight to look into cab costs, and we ended up deciding to rent a car. Since our hotel was in Johannesburg, we wanted to visit Pretoria, and the airport is super far away from either of those places, we really did save a ton of money. If you’re visiting any city in South Africa, I highly recommend looking into a rental car and bringing your own GPS. Public transportation isn’t very widely used and isn’t recommended for tourists. Europcar was really great for us during our short visit!

Straight from the airport we went to the Union Buildings in Pretoria. Another bonus about a rental car- you have a place for your luggage until you can check into your hotel! Especially important if you’re doing a 24 hour excursion like Fiance and I.

South Africa has three capital cities: Pretoria, Cape Town, and Bloemfontein (BLOOM-fawn-teen). Pretoria is the executive capital of South Africa, so where the president works. The buildings where he and his staff work are called the Union Buildings. The Union Buildings were built in 1913. 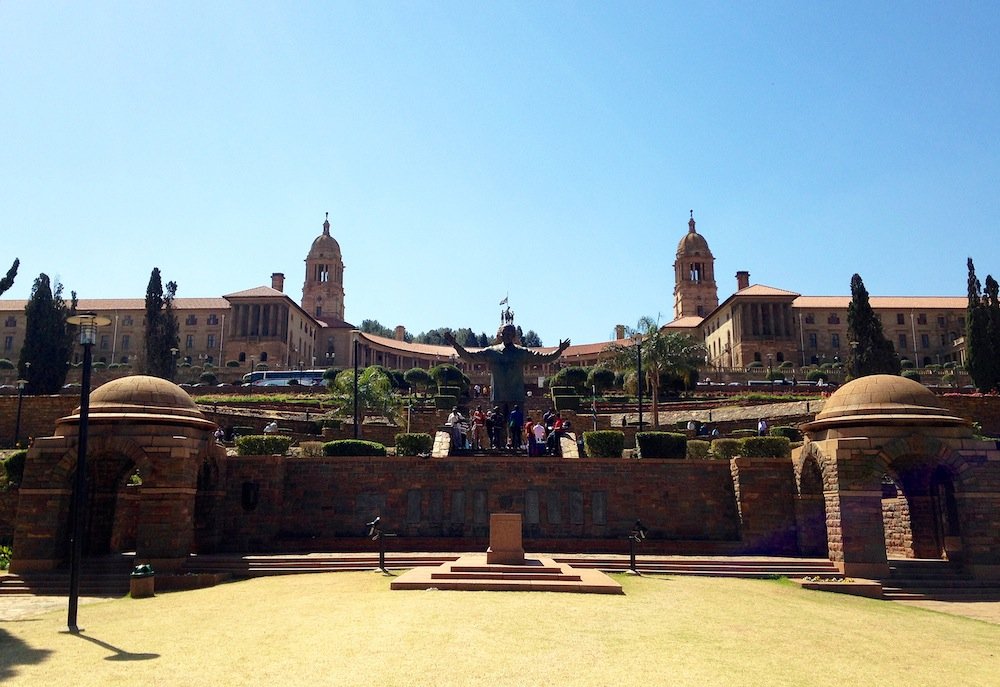 They sit on top of a large hill in Pretoria called Meintjieskop, giving the buildings an excellent view of the city. 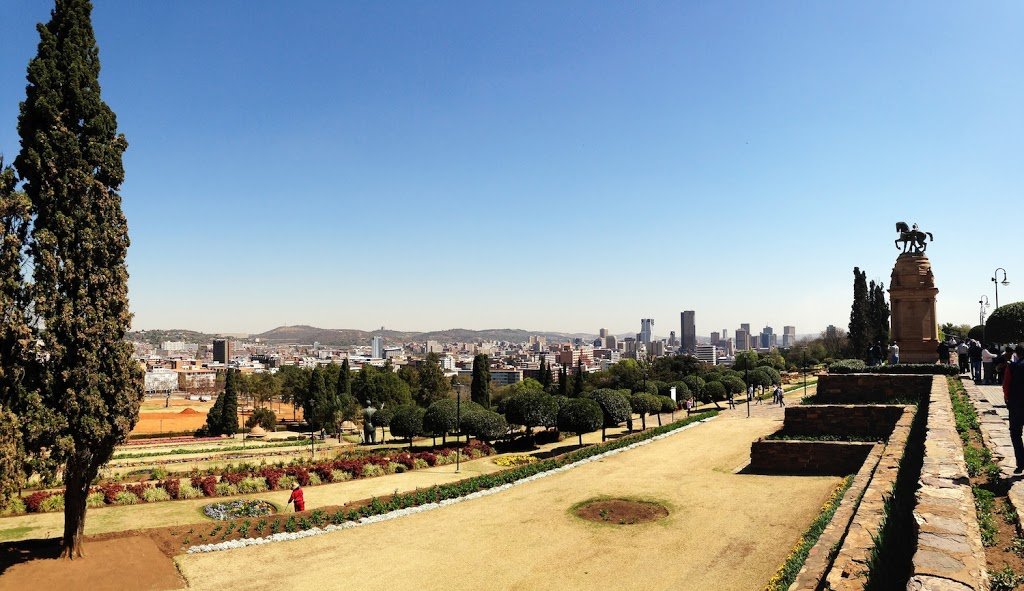 In 2013, this giant bronze statue of Nelson Mandela was erected. We’ve seen a lot of Mandela statues since we moved to South Africa, but this one might be my favorite! 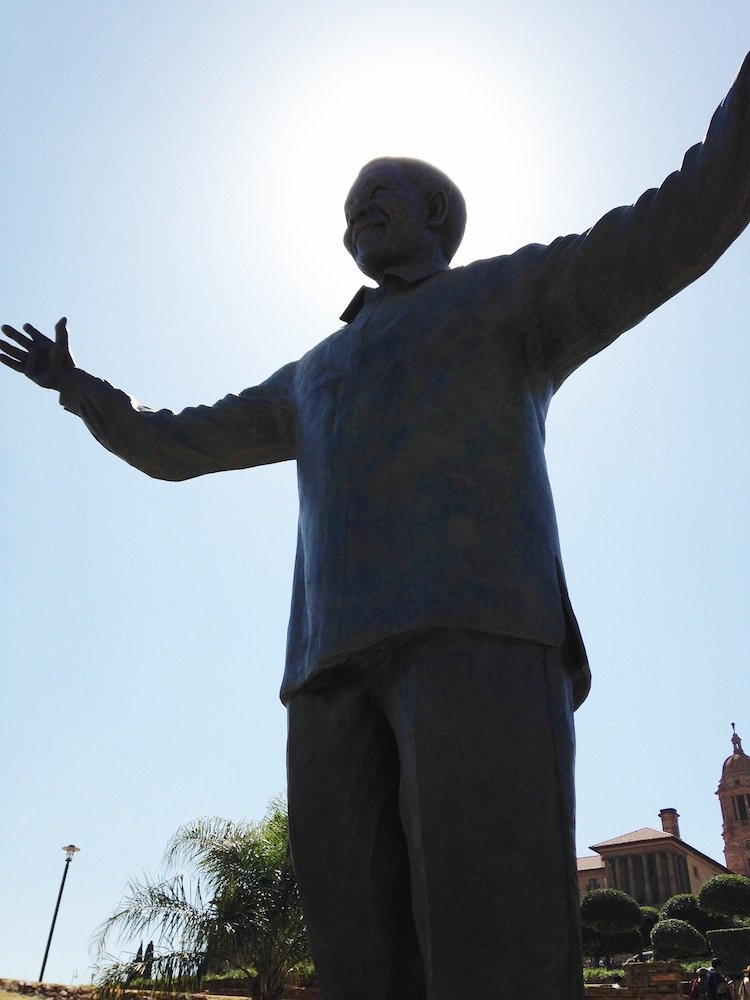 For some scale, here I am standing with the statue.

The Union Buildings are so beautiful and I’m really glad we chose to make this stop. I let Fiance pick all of our activities in the Johannesburg area, and he did good! 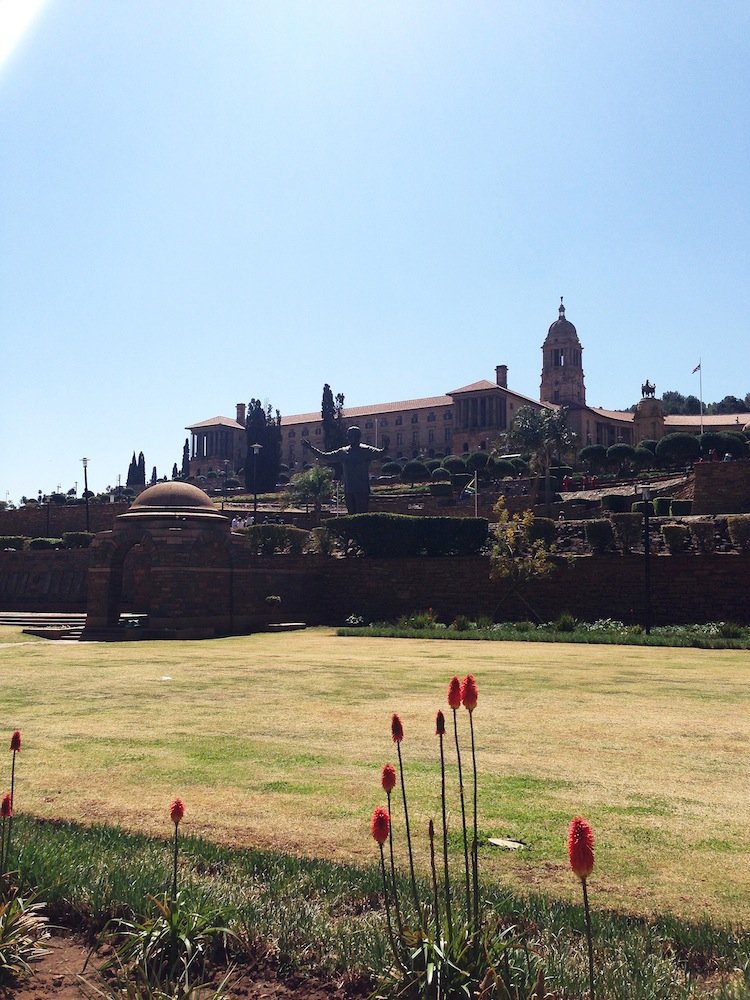 Our next stop was to the Voortrekker Monument in Pretoria, which we could see from the Union Buildings. There’s actually a law that says any building built between the two can’t be so tall as to obstruct the view.

The Voortrekker Monument is one of the more interesting (and controversial) landmarks in South Africa, so we knew we had to stop and see it. South Africa is a very multicultural place and this monument represents a very specific version of part of its history. The monument is a huge granite structure dedicated to the Voortrekkers who left what was then the British-controlled Cape Colony (which includes the Western Cape, where Fiance and I live) to settle in the northern and eastern parts of what is now South Africa in the mid-1800s. 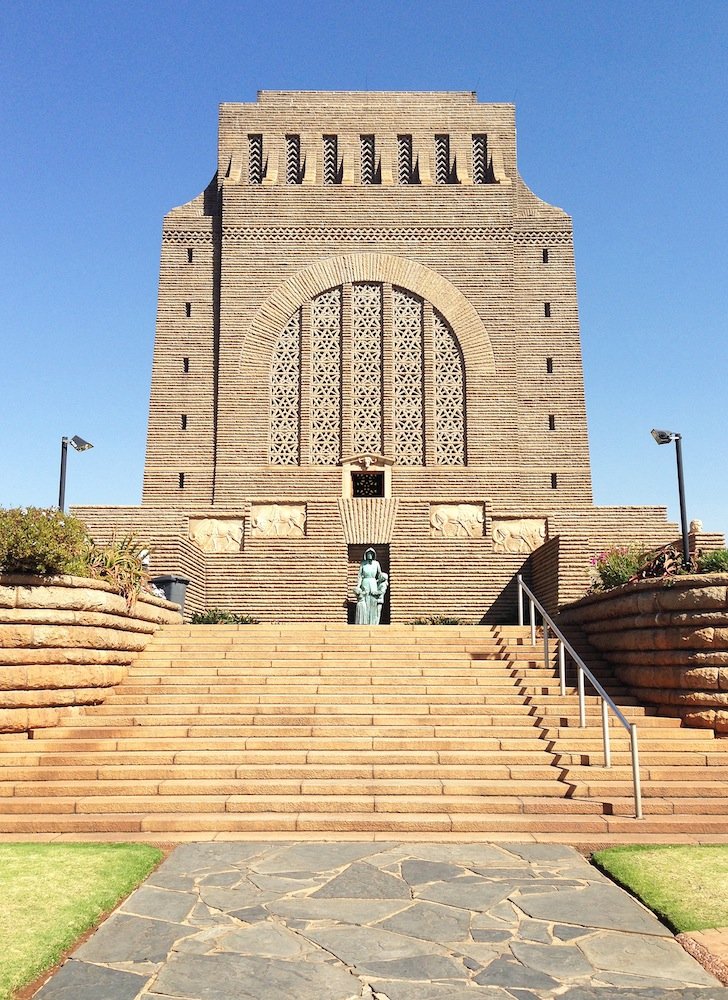 The bronze statue you see in the center is of a woman and two children. It was built to commemorate women’s efforts to what they called the Great Trek. 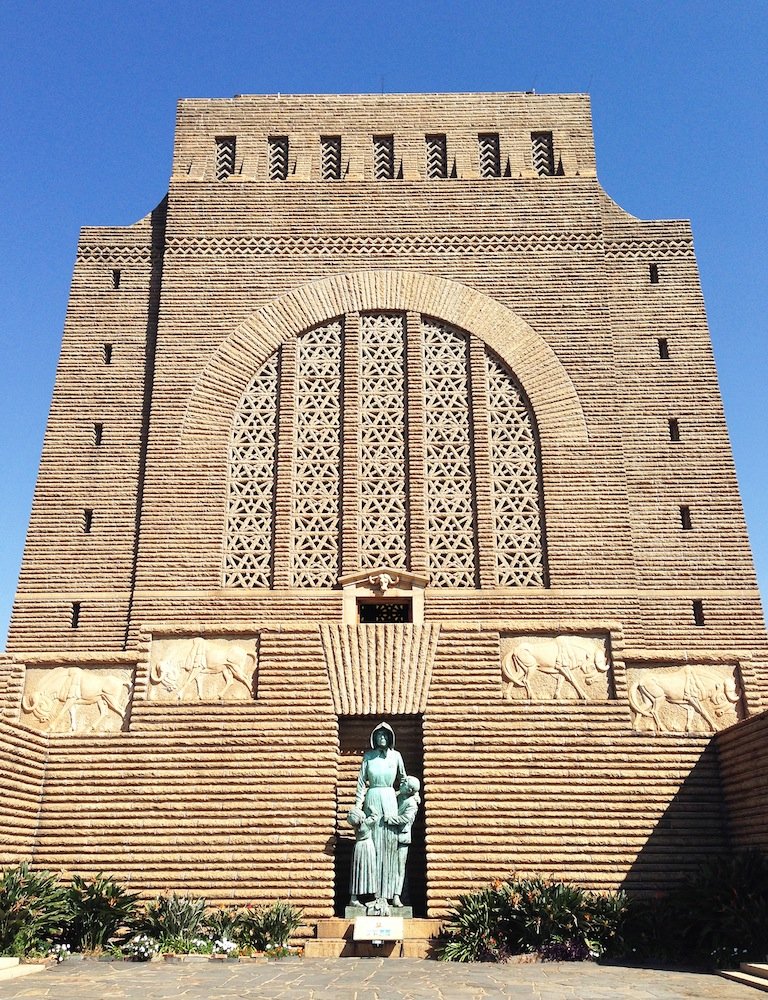 You enter into a huge domed room called the Hall of Heroes. There are relief sculptures all along the walls that tell the story of the Great Trek, starting on the left and wrapping around the entire room.

The sculptures depicted some of the more significant events of the trek, including battles, as well as daily life. 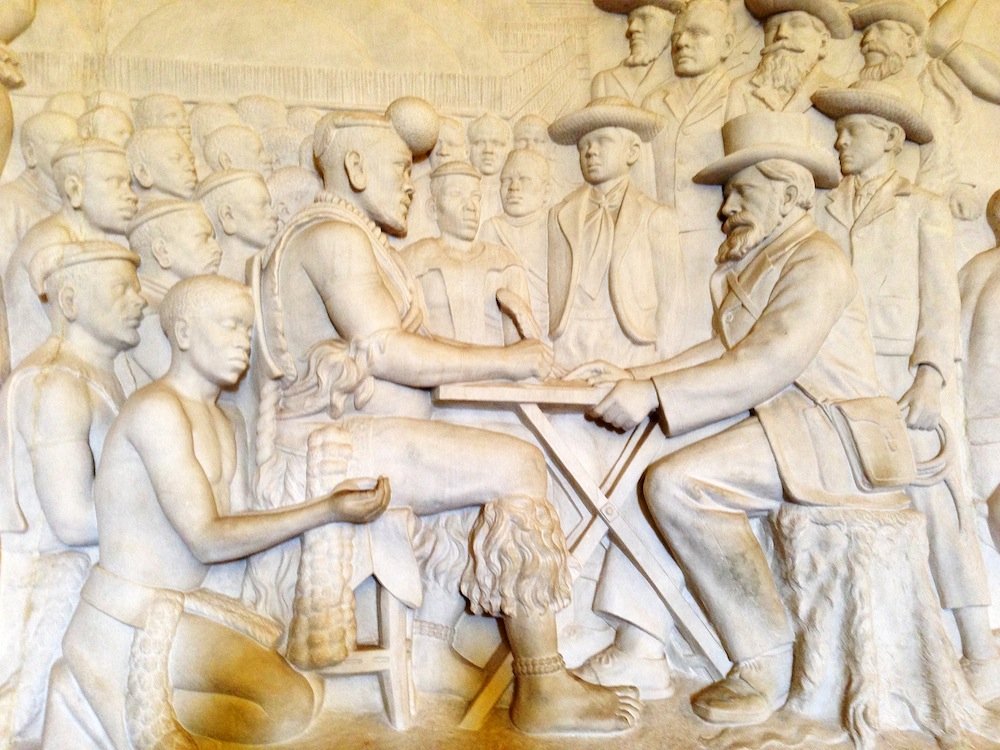 The floor underneath the Hall of Heroes holds a cenotaph (an empty grave) dedicated to those who died during the trek. On December 16th at noon, the anniversary of the Battle of Blood River which was called the Day of the Vow until 1994, a ray of sunlight shines on the cenotaph from a hole in the ceiling. The Battle of Blood River was a battle between the Voortrekkers, who were Afrikaaners, and the Zulus, which the Voortrekkers won. In 1994, at the end of apartheid, it was renamed the Day of Reconciliation in the hopes of creating a national unity day.

The Day of the Vow refers to a vow made by the Voortrekkers to God the day of the Battle of Blood River. The Voortrekkers promised that if God helped them win the battle, they would build a church in his honor and forever honor the day. Here is the text of the vow outside the monument: 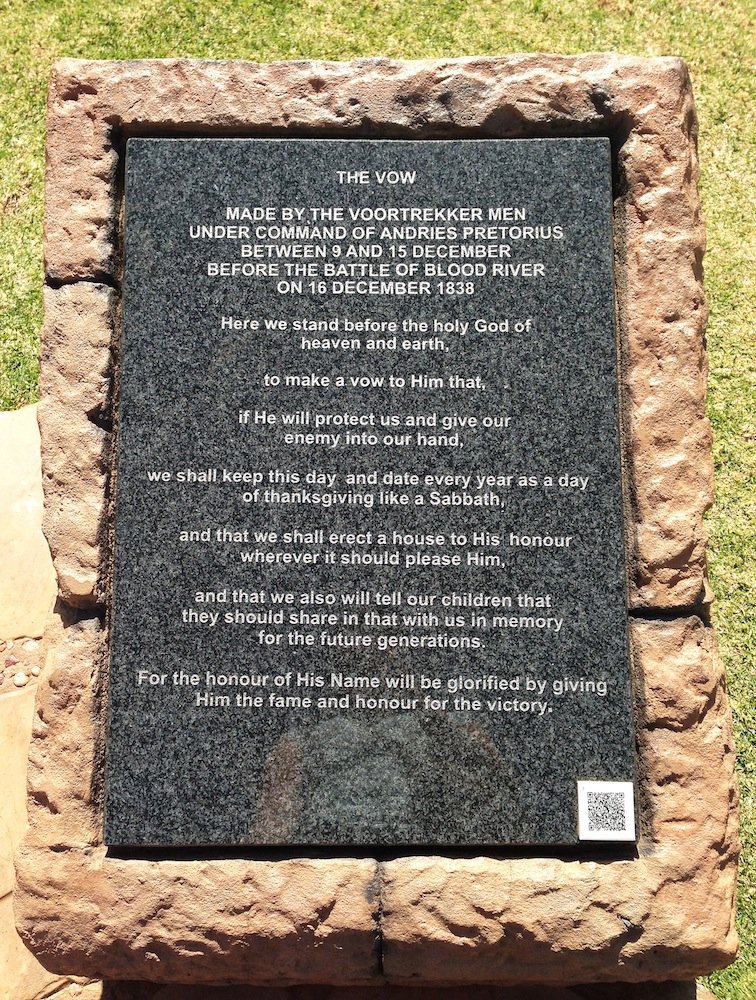 The room that held the cenotaph was lined with flags of the different Voortrekker Republics as well as tapestries depicting the Great Trek. The tapestries were reminiscent of depictions of westward migration in the US (the Oregon Trail) I encounter at home. 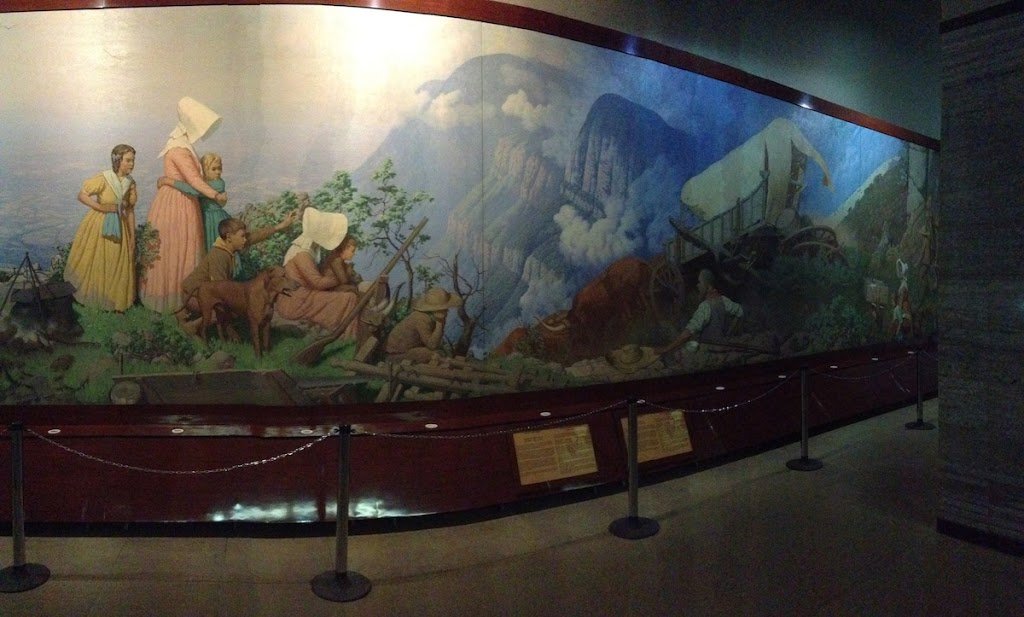 The lowest floor was a museum with some artifacts from the trek. After we explored that, we went all the way to the top of the monument, which Fiance insisted on taking the stairs to instead of just hopping on the elevator. I guess it’s good for me. The stairs may have given me jelly legs, but the view was worth it. You can stand on the roof of the monument and get a great view of the city.

In the fields surrounding the monument, we spotted a few zebras and wildebeest, which was fun! Wildebeest really are the ugliest African animal.

From there, we headed to our hotel in Sandton, a suburb of Johannesburg. After getting checked in and Fiance spending half an hour trying to figure out how to park our car (which he claims wasn’t his fault… Just kidding, Fiance!) we went to dinner at Mandela Square. 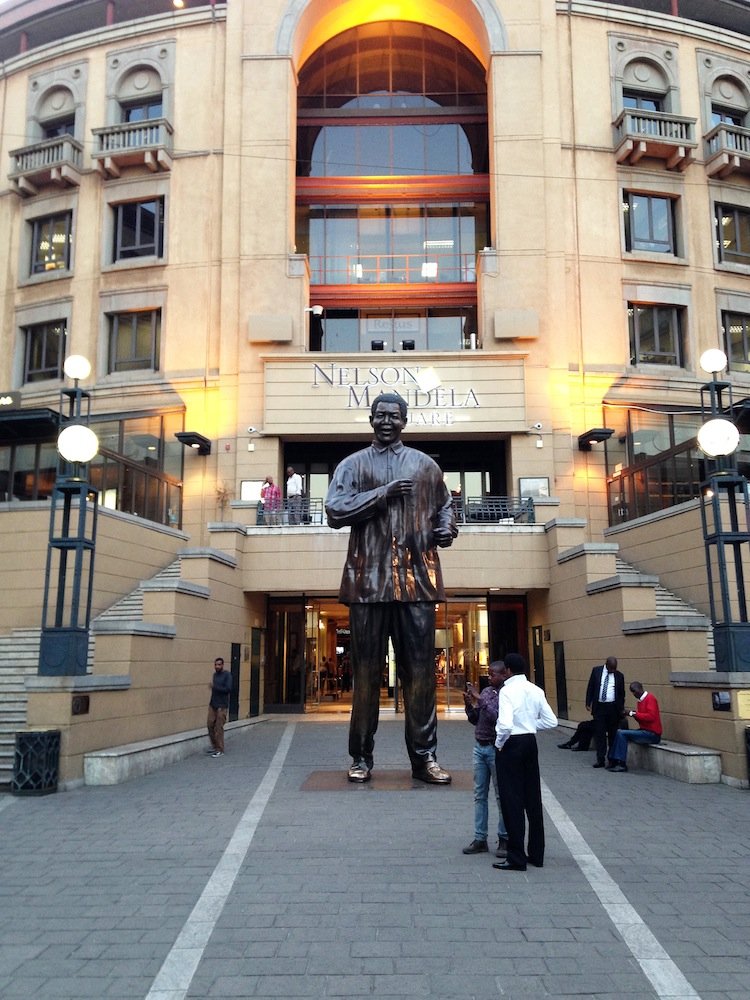 After exploring the shops a bit and getting a few drinks at a worldwide restaurant chain that shall remain nameless because I’m too ashamed to say it, we got dinner at The Butcher Shop and Grill. Great wine, good food, although I keep getting undercooked steaks every time I order them. Sorry, dad, I’m going to have to start asking for medium.

Overall, it was a great quick trip to Gauteng! There’s obviously still so much we could see there, but we got to take in some fantastic cultural sights. Next week, I’ll be sharing our trip to Victoria Falls!