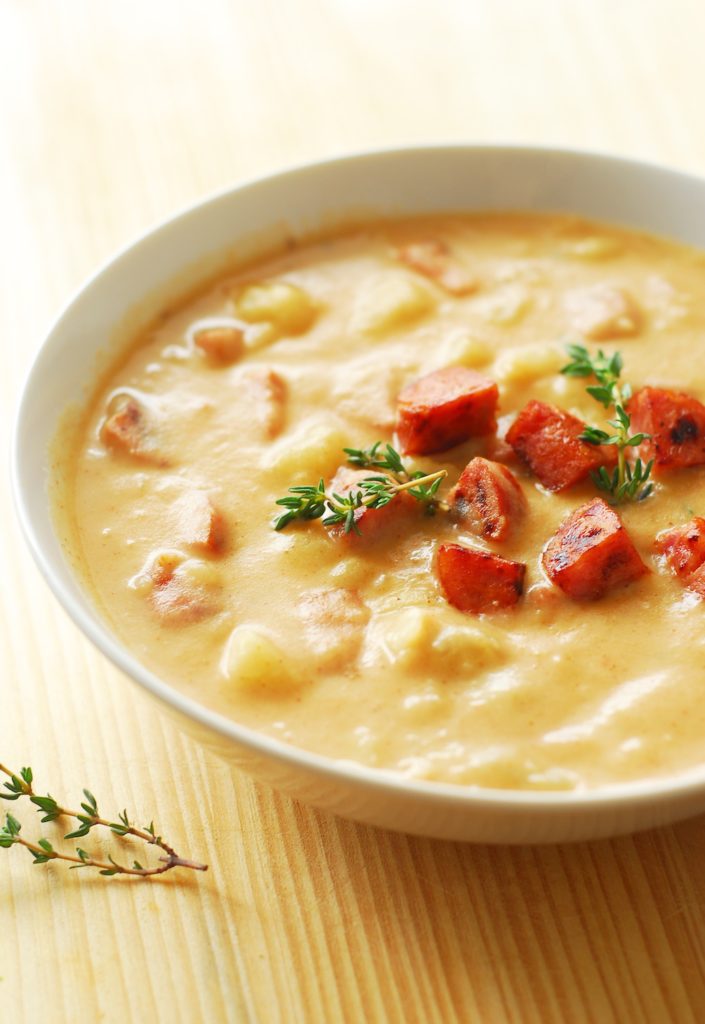 FIRST THINGS FIRST. Welcome to A Duck’s Oven’s new website!!! I am seriously super excited about this. This has been a huge undertaking including me switching from Blogger to WordPress (more deets on that later), finally (FINALLY!) deciding on a theme, learning WordPress, learning CSS, and so much more. And it’s still very much in process. I’ve also just joined the BlogHer network, which I couldn’t be more excited about! More to come on that later, too.

Thank you for putting up with my excitement about A Duck’s Oven’s makeover. Anyways…

So, you all have read paragraph after paragraph of me whining about how much the pizza in Cape Town sucks. To be fair, we have found some decent pizza, and even discovered recently that that decent pizza chain delivers. Part of what makes that pizza decent is that it’s often topped with chorizo, something we don’t see a lot of in Portland but is very popular here. This has sparked a new love for this particular cured meat because I hadn’t really eaten all that much of it before our jaunt across the world.

I had originally planned to make a chicken chowder and had this chorizo on hand for deep dish pizza recipe testing round 2 (oh, the things I have to do for this blog…) but inspiration struck and this become a way more awesome spicy chorizo chowder. Seriously, cured meat + smoky paprika + plenty of cayenne in the form of chowder is the stuff of dreams.

Best of all, a serving is only 250 calories! And it’s still a delicious creamy chowder! I used a trick taught to me by my future mother-in-law to make it on the lighter side without sacrificing thickness.

And now, without further ado, on to the spicy chorizo chowder.

Start by choppin’ up plenty of celery and onion. 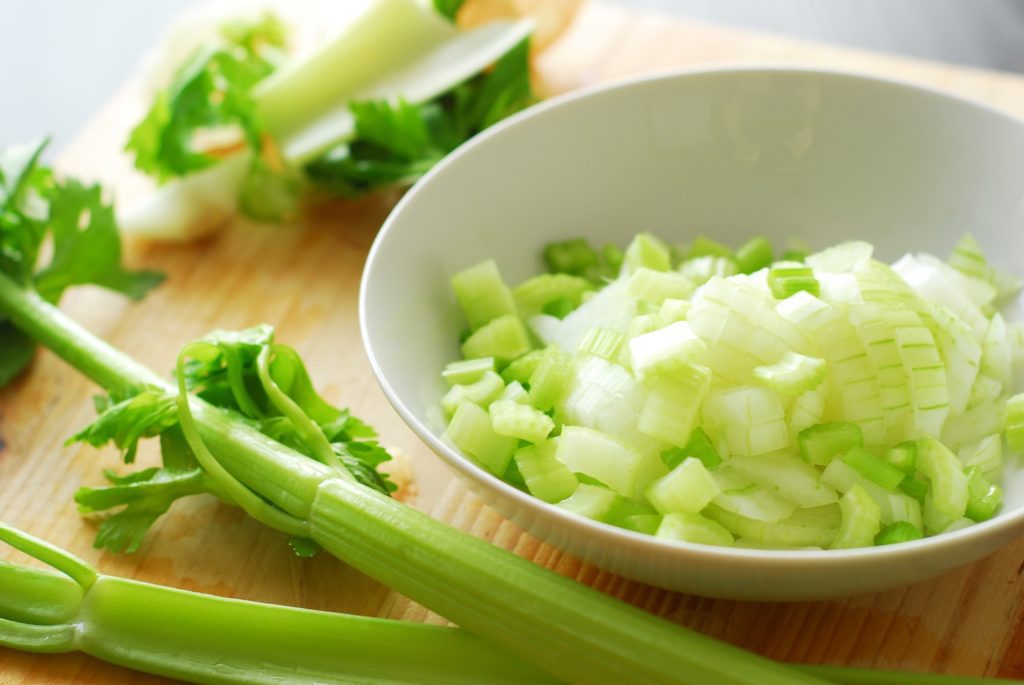 And then potatoes. Lots o’ potatoes. Potatoes are the secret to thickness without a ton of butter and flour. 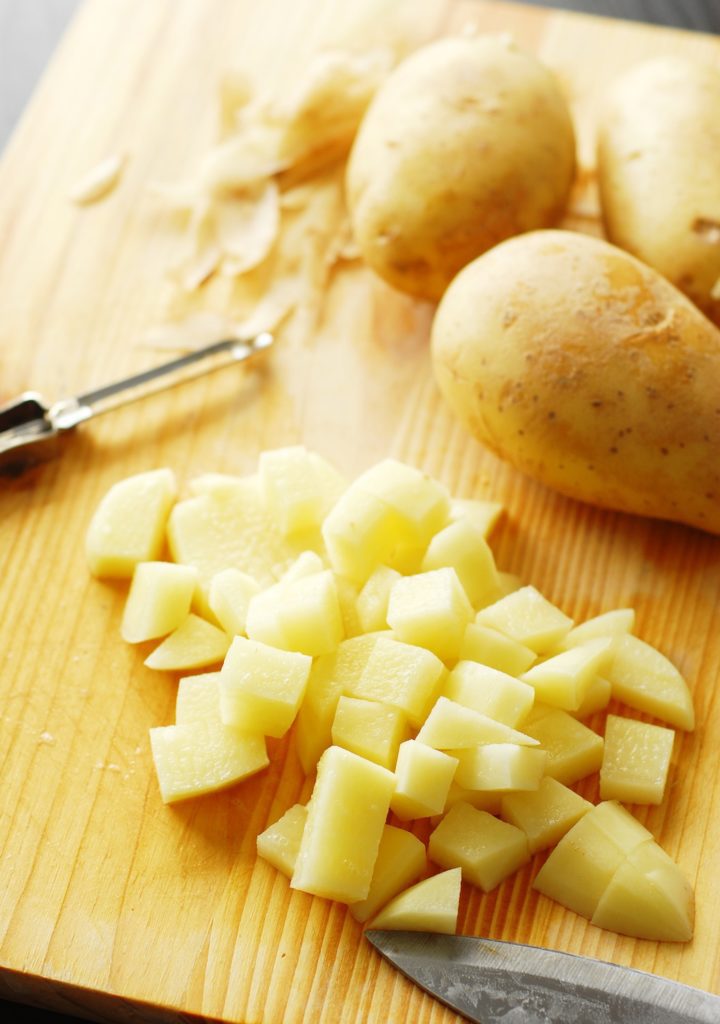 And chorizo, of course. In my experience, there are two types of chorizo: squishy, sausage like chorizo and dry chorizo sticks. Either will work for this. I chopped my chorizo a little too big. Chop it smaller. This is squishy chorizo, which I like to cook down a bit in a nonstick skillet over medium heat to render some of the fat out and get crisp edges. 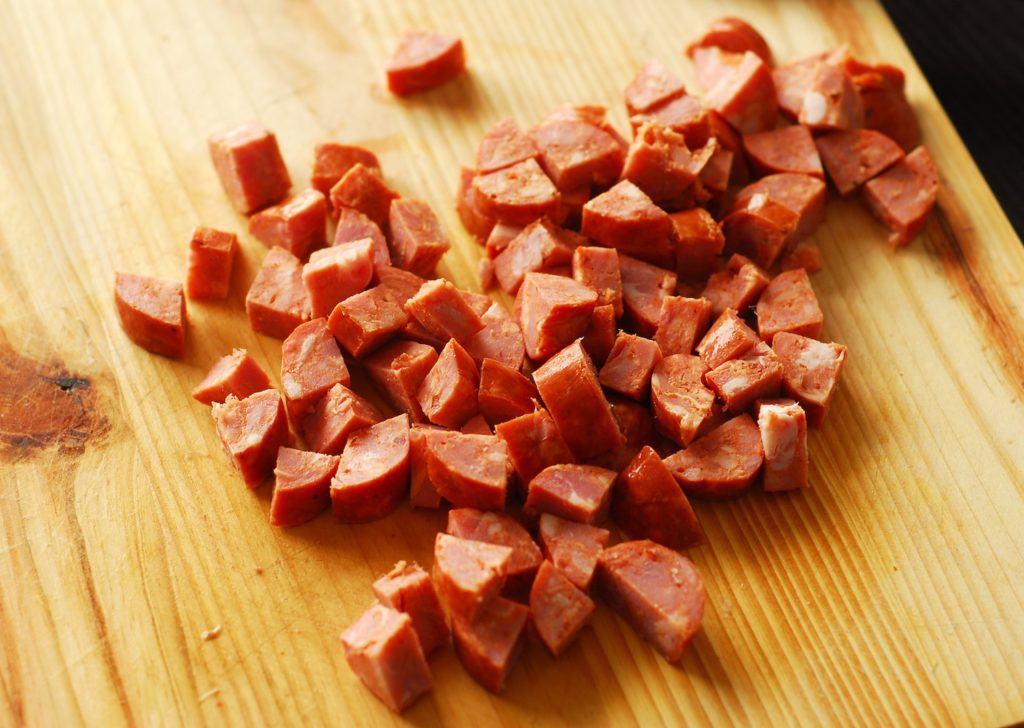 From here it’s pretty easy, and very quick. I love soups that come together quickly! Not that I don’t love you, crockpot. It’s just that you’re far away from me in Portland, Oregon, and I’ve had to make do without you for so long.

Saute the celery and onions in a little bit of butter, then add the garlic and saute a little more. Then in goes chicken broth and potatoes. Boil the potatoes until they’re fork tender, about 12 minutes.

So here’s the deal: I’m sure by now you’ve figured out that we’re going to puree some potatoes to get this soup thick. I still like chunks of potatoes in my chowder, so I removed about half of the potatoes first.

Some celery and onions got lumped in with the removed potatoes, and that’s great, too. Then I pureed the remaining potatoes with the broth.

Then just stir in the set aside potatoes, chorizo, milk, paprika, cayenne, cumin, black pepper, and a little fresh thyme. Get (or bake!) yourself some nice crusty bread to dunk into this chowder. Seriously, who needs spoons? I almost just took you into the Wikipedia black hole I found myself in recently about trenchers, but I’ll let you do that yourself if you so choose (hint: click “trenchers”). You are welcome for my self control. 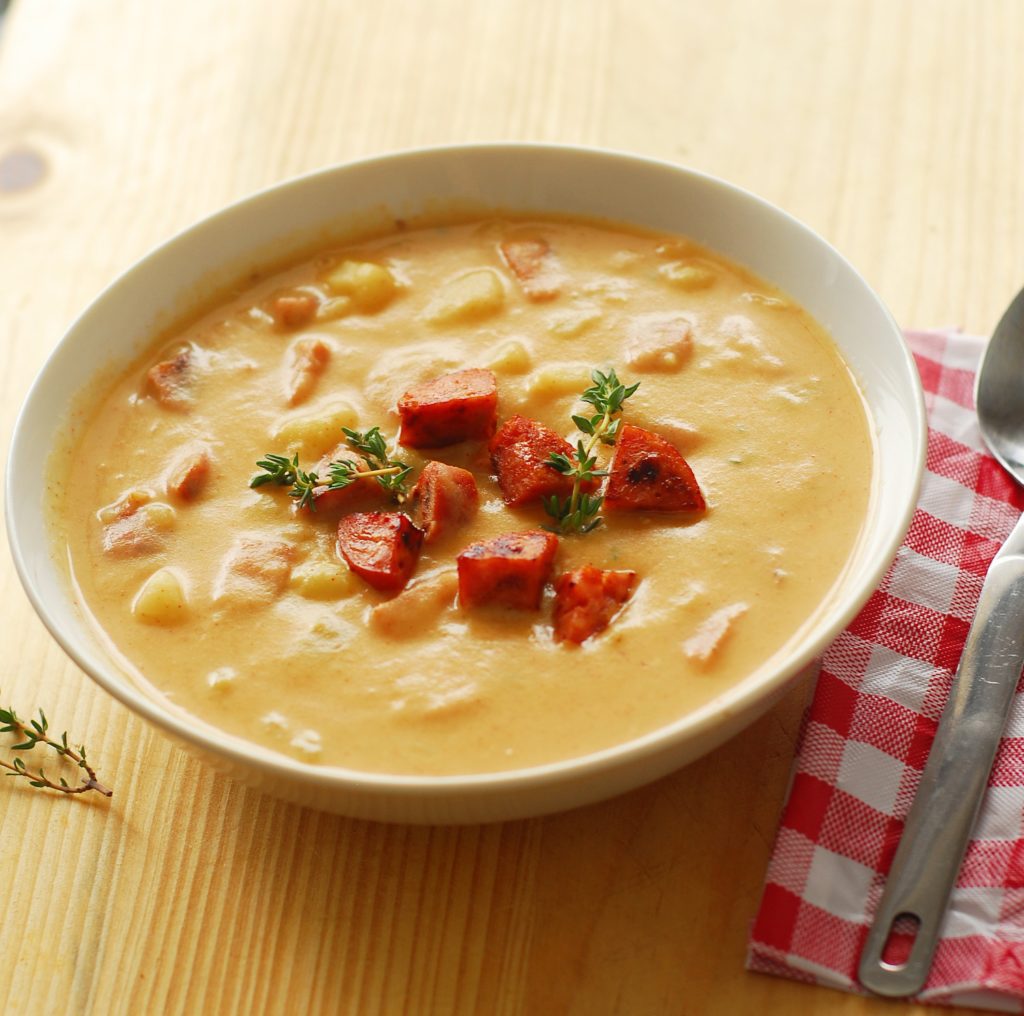 I hear Oregon is officially entering the rainy season, also known as all months except July, August, and September, so hopefully a big bowl of this chowder will help make life in the cold rain a little more bearable. 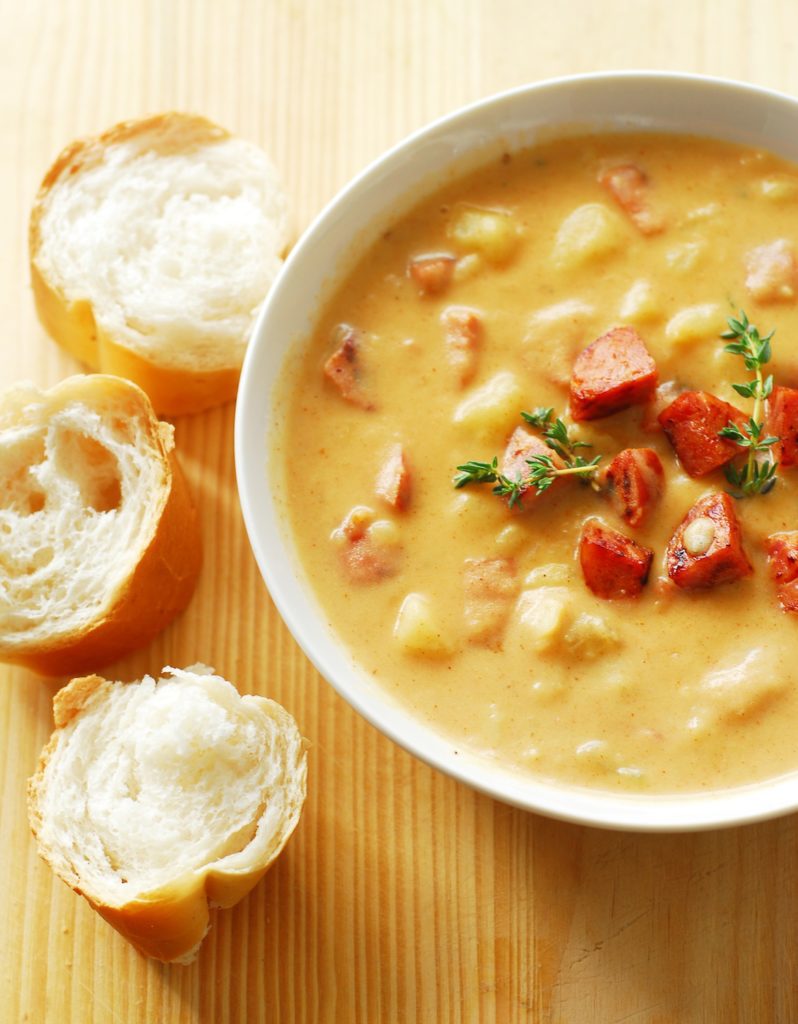 Sorry to make your outlook so bleak. I know a lot of you weirdos love the rain and Oregon is super beautiful. And yes, I know I’ll be in the land of the rain again in just two very short months. But until then, every day of this week’s weather forecast is showing sunny and 81, so I’ll be at the beach! 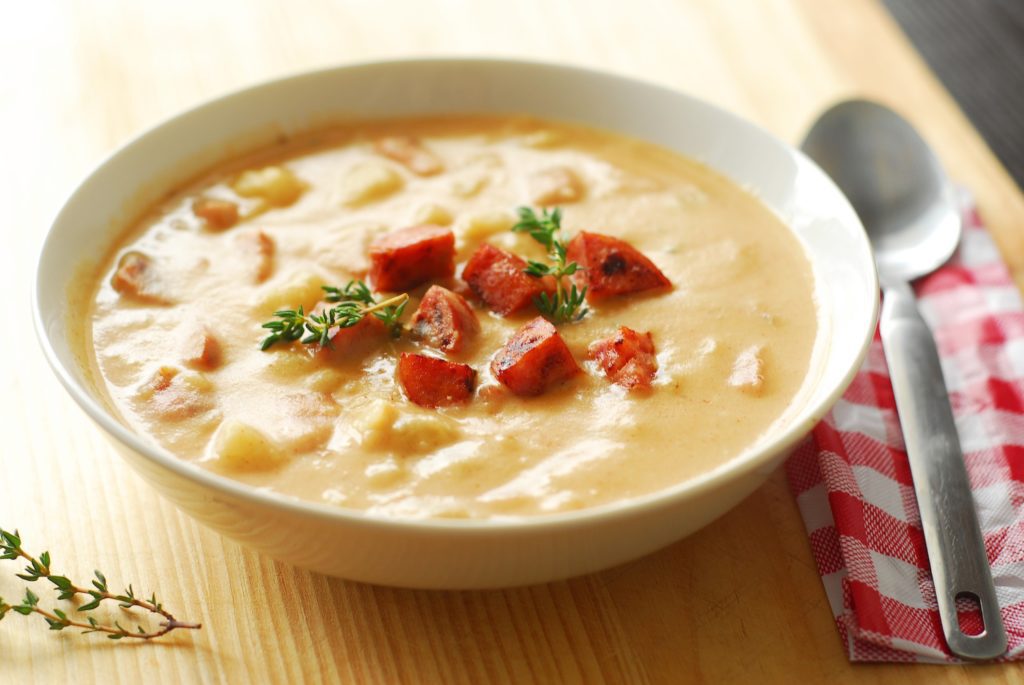 And then I’ll be coming home and enjoying a nice big bowl of this chowder, even if something a little lighter and fresher might be more weather-appropriate. In case you’re in search of beverage pairings, a nice IPA is perfect with this spicy soup!

If you like your chorizo to be a little on the crispy side, you can cook the diced chorizo down a bit in a nonstick skillet over medium heat for about 10 minutes, stirring occasionally.