Picanha (sirloin cap) is one of the meatiest cuts – it rivals prime rib! Do it sous vide & serve with Horseradish Dijon Sauce for an easy, delicious meal.

So, what the hell is picanha?

According to fan favorite Wikipedia:

How to Make Sous Vide Picanha

I have been trying to get my hands on picanha for months. Months, I say! And last month, when I was placing my monthly Porter Road order, I saw it in their inventory and jumped at the chance.

P.S. Have you heard of Porter Road? They are my favorite online butcher. The quality of meat is going to up your cooking game with no effort on your behalf.

First things first, I seasoned the picanha thoroughly with salt and pepper.

Then I vacuum sealed it and dropped it into the sous vide water bath.

Are you still on the hunt for an immersion circulator and/or a vacuum sealer? I can’t recommend Vesta Precision‘s products enough: check them out and hop to precision cooking ASAP!

But now the hard part: time and temp. I really psyched myself up to cooking it. I did a ton of research, asked all of my sous vide friends for their opinions, and really thought about all of the red meat cooks I’ve done. Here’s what I eventually settled on for my picanha, and it was perfect: 131 degrees F for 6 hours.

Why 131? Typically, I like my steaks at 129, but I really wanted the fat cap to get to render. Not to mention, for long cooks like this, it’s safest to cross the 130 threshold to pasteurize the meat.

Why 6 hours? This is where I really deliberated. A lot of people say 2 hours is plenty. But this is a really thick cut with a massive fat cap, and two of my favorite sous vide people, Cole Wagoner and Erika Turk of Food and Frenchies, recommend a 6-8 hour cook. And I would not go any shorter.

This delicious, meaty cut eats like a prime rib. No exaggeration, here. It’s one of my favorite things I’ve ever cooked.

After the sous vide bath, I let my cast iron skillet get to smoking temps. I covered the picanha in mayo (a mayo sear is king for crust and browning!), then seared the fat cap first to render the fat down so I wouldn’t need to use another cooking oil. Then I continued to sear on all sides until well-browned. The thickness of the crust gives you wiggle room with time: you can sear for a little longer without worrying you’ll overcook.

To serve, I made a sauce with horseradish cream, dijon mustard, minced garlic, fresh parsley, red wine vinegar, and olive oil. Oooh my gosh, it was the perfect accompaniment.

To keep things keto and amazing, pair this with my Cauliflower Gratin or Warm Brussels Sprouts Caesar for a complete meal and happy mouths.

If you make this recipe, it would mean the world to me if you’d rate and review below! It helps other people find this recipe, too. 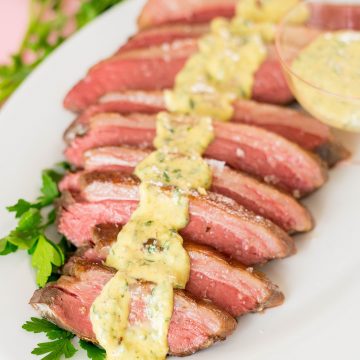