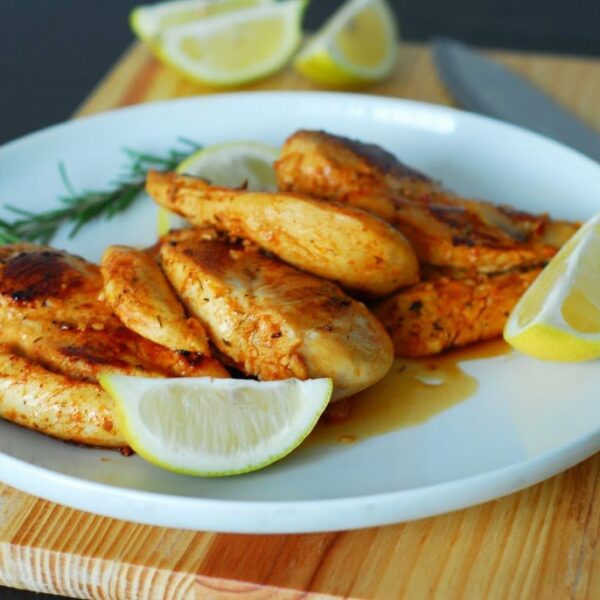 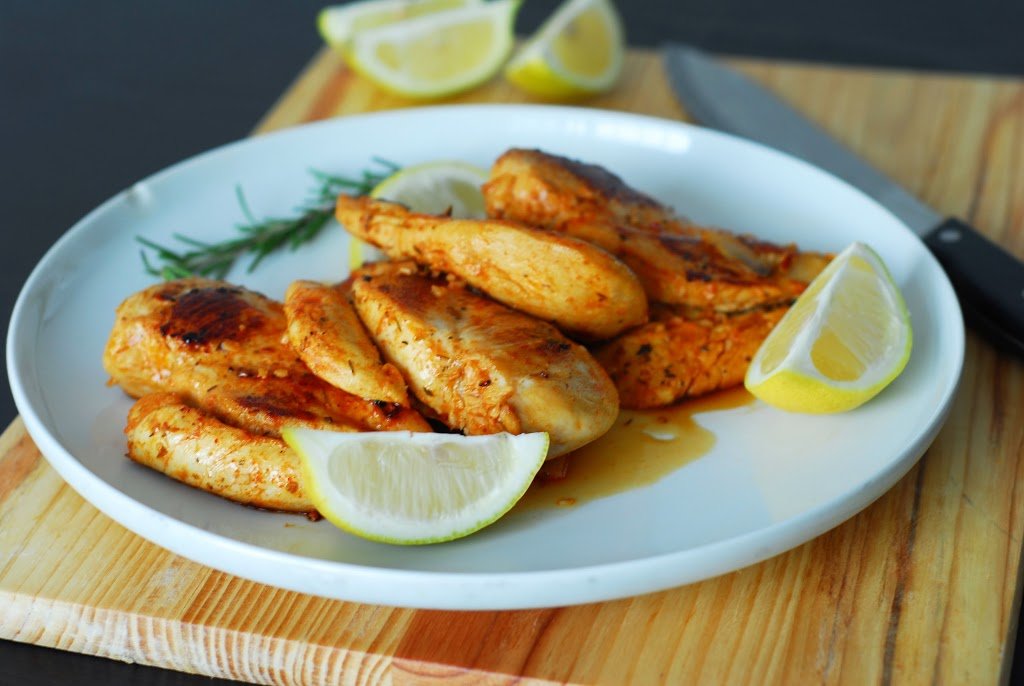 I will admit, the first few dinners I cooked in our new kitchen in Cape Town were very much dependent on the little panini press we found in our flat. But once we got our bearings and I was able to figure out most of the local grocery stores, I dove into learning as much as I could about local cuisine. While we were waiting for our internet to get set up, this was accomplished through magazines, but eventually I had the all-incredible World Wide Web to educate myself.

There are many, many South African recipes I’m antsy to try, but this one struck me for its simplicity. This marinade is traditionally used on chicken livers… but Fiancé and I aren’t quite ready for that and I saw plenty of people using it on chicken breasts. Maybe we’ll try them eventually… Maybe not.

Peri peri sauce (or often seen as “piri piri”) has its origins in Portuguese cooking, but is very popular across Africa, especially South Africa. This makes sense since the chili it’s named for (and that you’re supposed to use in preparation) is an African chili. There are many, many different versions of this dish, and I put this recipe together after reading 10+ others.

This chicken should definitely be grilled, so please, please grill it if you can. Unfortunately we don’t have a grill, so I baked it and broiled it a while for color. Using the braai (barbecue) is a very popular cooking method here, so we might have to crack and get a little charcoal grill.

Start the marinade off with two lemons for juicing and half a yellow onion roughly chopped. The lemons tend to be on the greener side here! I’m not sure if this is because they’re picked earlier or if they really are just a little more green. Feel free to tell me if you know. 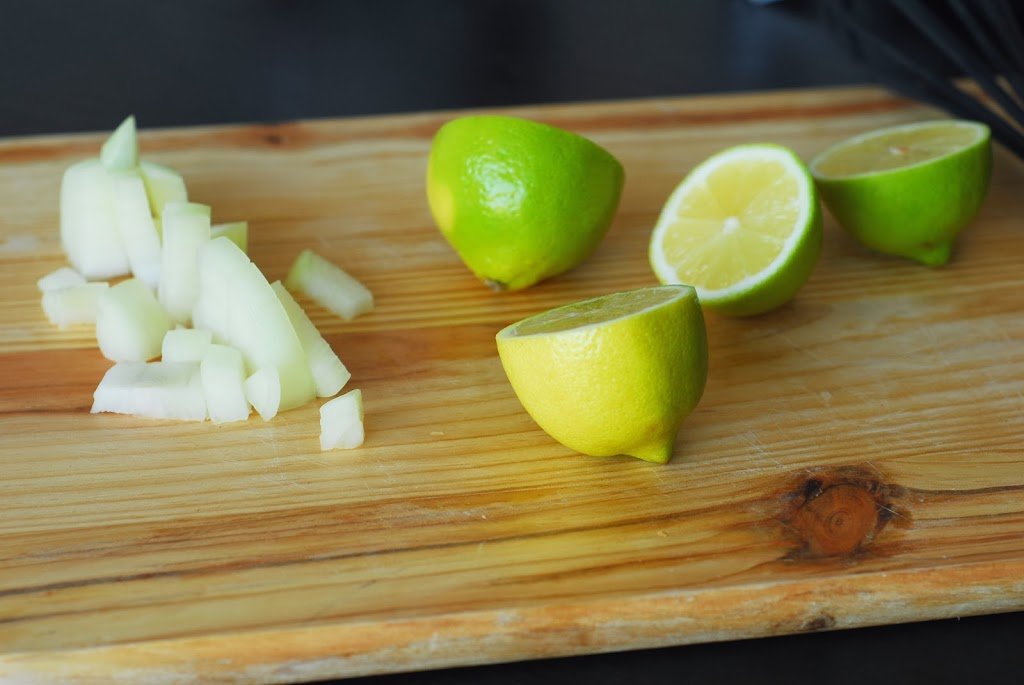 Add the onions to a bowl and squeeze all the juice out of the lemons, then add salt, pepper, cayenne pepper, chili powder, minced garlic, dried oregano, paprika, vinegar, olive oil, and ground ginger. A little grated fresh ginger would also be great, I just didn’t have it on hand. 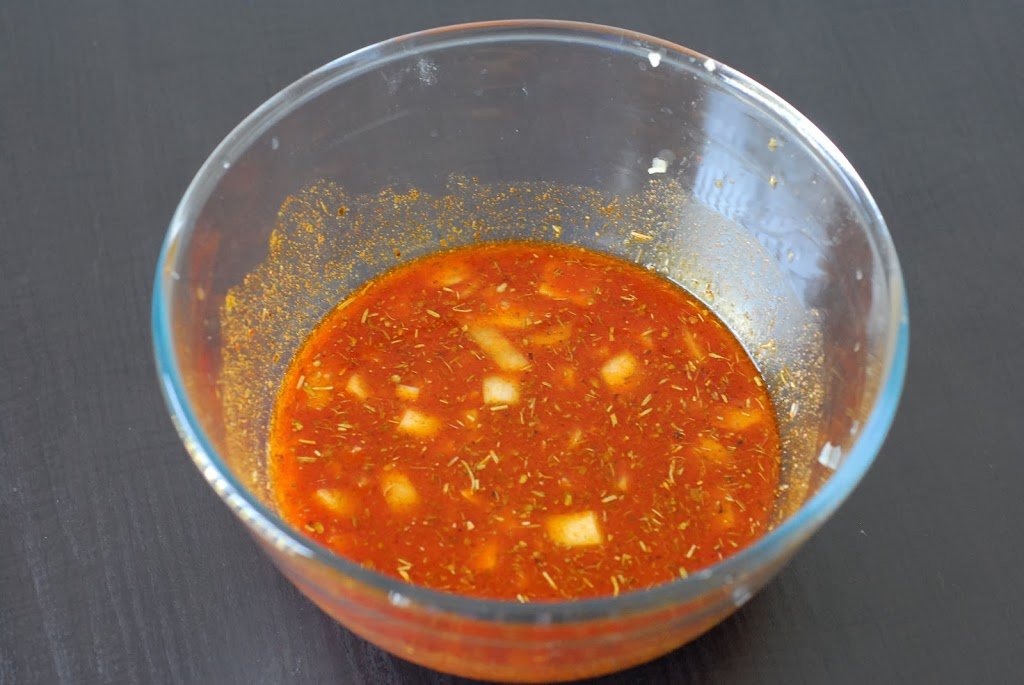 Pour most of the marinade into a ziploc bag (after some more hunting, I found them here!), but reserve a little of the liquid out for basting while the chicken is cooking. Add the chicken to the bag and let marinate for at least three hours. I did overnight and the chicken was moist and delicious. 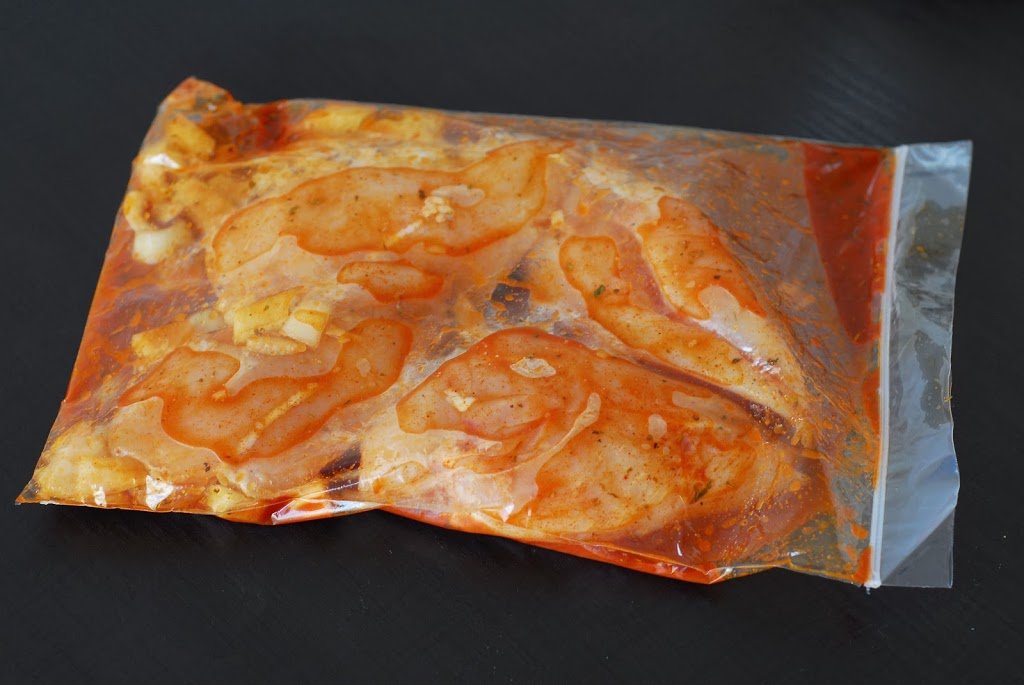 Again, if you can grill this chicken, please do! I think it would be great blackened a little bit. If not, the oven will get the job done. Preheat to 400 degrees (Fahrenheit, or about 200 degrees Celsius) and arrange the chicken breasts in a baking dish with the onions from the marinade. Bake for about twenty minutes, or until juices run clear. I broiled mine for a few minutes to give it nice golden color. You could also brown the breasts in a skillet before cooking in the oven. 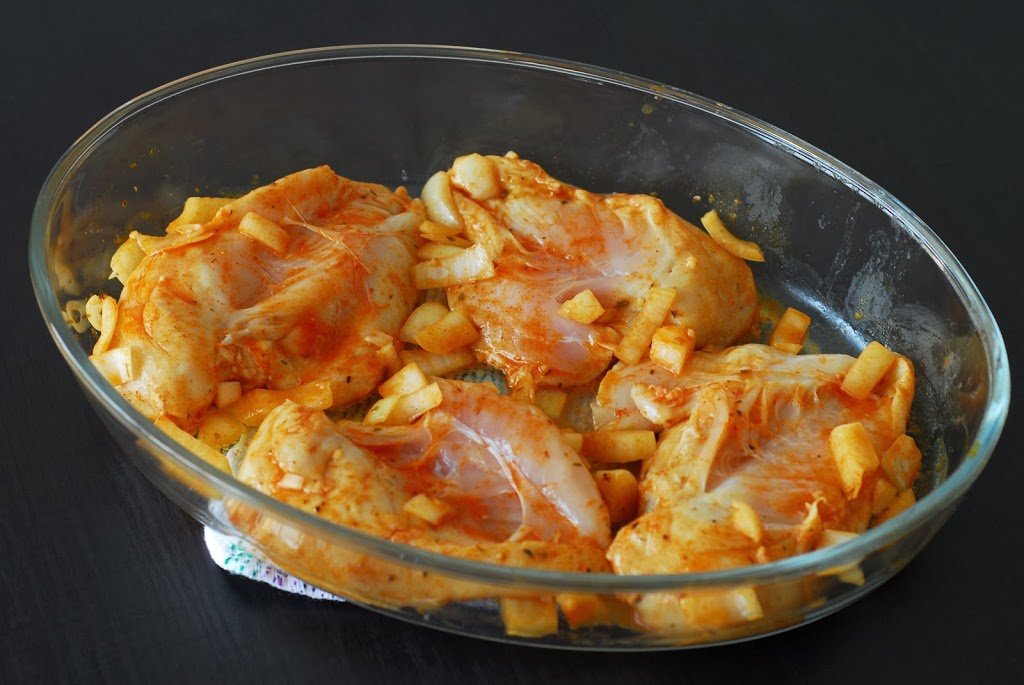 If you’re grilling, baste the chicken with the reserved marinade when flipping the chicken. If not, add it upon serving. 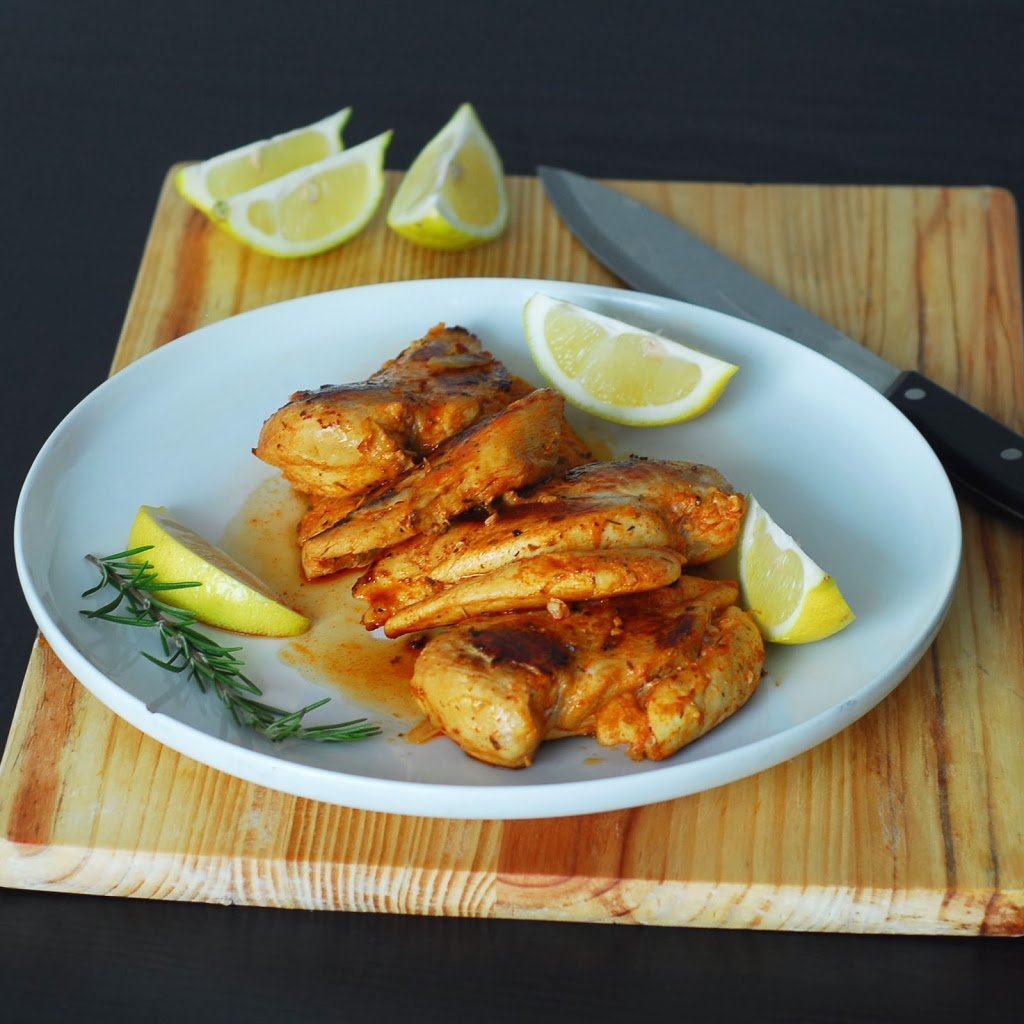 We had this with green beans and sweet corn on the cob. It was delicious! 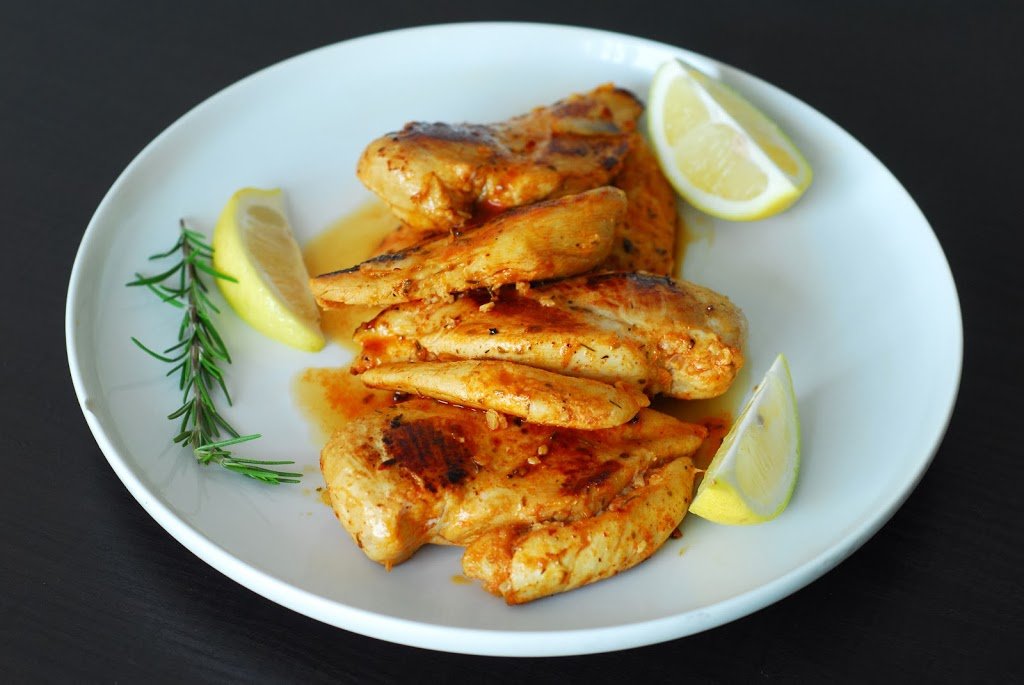 The kick from the cayenne pepper and the tartness of the lemon make this a bright chicken and it packs a lot of flavor. For all those in the States, it’ll be just as good now as in the summer during a barbecue. 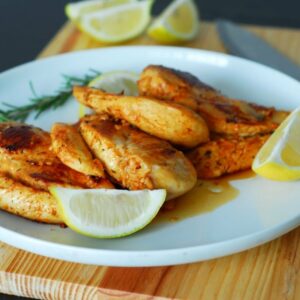