We saw a rugby match and a cricket match pretty quickly after arriving in Cape Town because those sports are not very common in the US and it was fun to watch what I had deemed “kind of football” and “kind of baseball”. Luckily, now I know both sports pretty well and understand how they are distinctly different from my favorite American past times. In fact, while watching a rugby match at our favorite local restaurant, I won 100 Rand (about $10) by giving the closest guess to the final score!

The next big sports thing we wanted to catch before leaving Cape Town was some kind of event at Cape Town Stadium, preferably soccer. Cape Town Stadium opened in 2009 in preparation for the upcoming World Cup that was held in South Africa. The 55,000-seater stadium has very unique, bowl-shaped construction. It’s located near V&A Waterfront, where Fiance and I spend a lot of our free time. 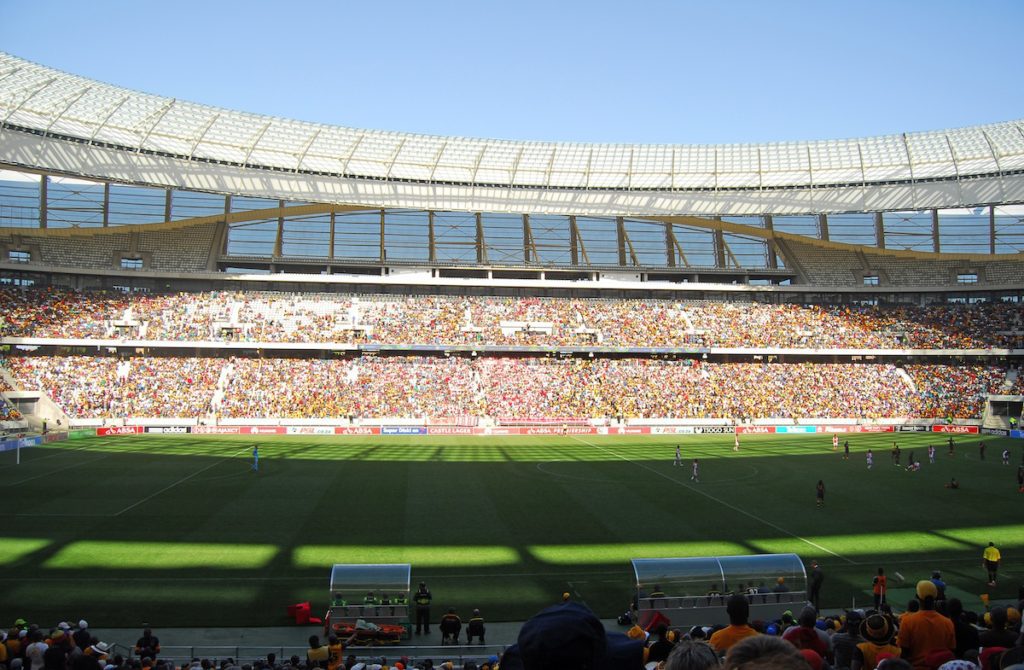 So, we caught a match between the Ajax (pronounced eye-ax) and Kaiser Chiefs! This was a surprisingly popular match because the Kaiser Chiefs have such a huge fan base. Even though the Ajax are Cape Town’s team, probably 70% of the fans were supporting the Chiefs. Traffic was horrible and parking was confusing, so we ended up in the stadium about 10 minutes before half time. You buy tickets to sit in a section, not individual seats, and our section was completely full when we arrived. We had to wait for it to empty a bit at half time before poaching a couple of seats.

Luckily we did sit down in time to catch the one and only goal of the match! Courtesy of the Kaiser Chiefs. 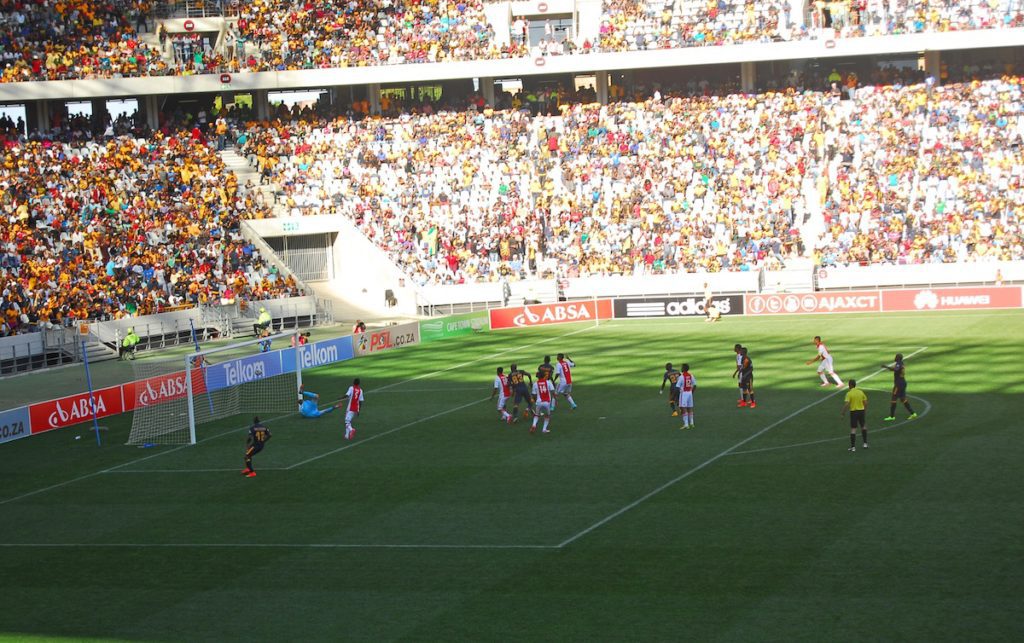 It was a fun match and more competitive than we thought it would be going in. The Kaiser Chiefs are very good. 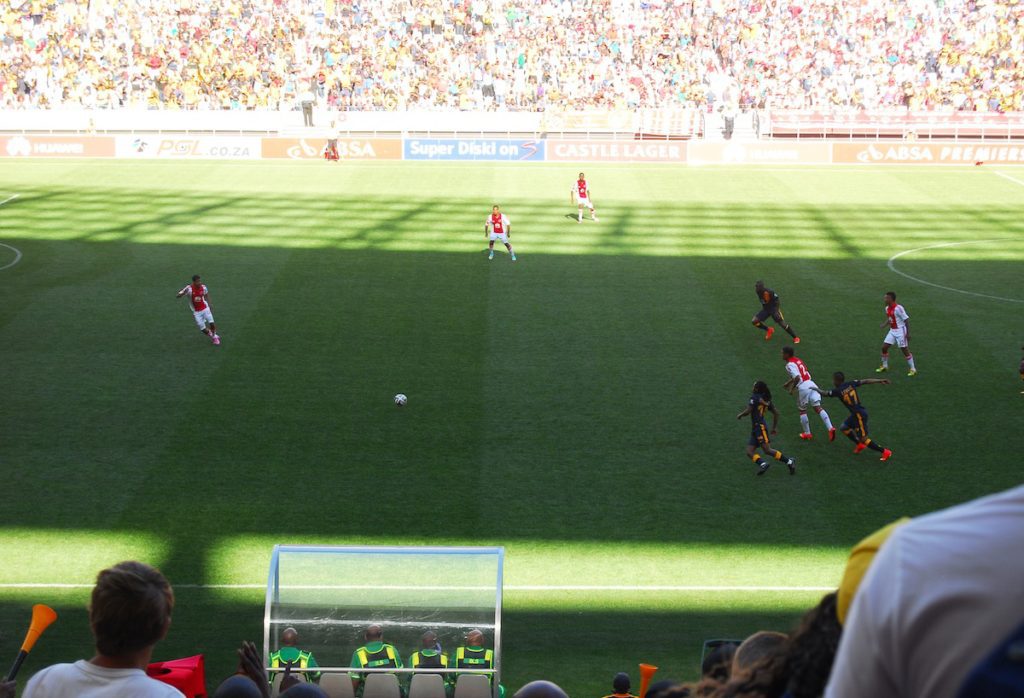 I really do consider myself to be a sports fan. I enjoy watching football, soccer, and tennis. I absolutely love going to baseball games, but generally don’t like watching them on TV. I think we can all admit they’re pretty slow. And hate me if you like, but I find basketball to be somewhat boring. Really, I mostly just like football. Love football. I will save you my sob story about how we’re missing getting to watch the Ducks play every Saturday and how listening to the games on the radio at 4 in the morning just isn’t the same. 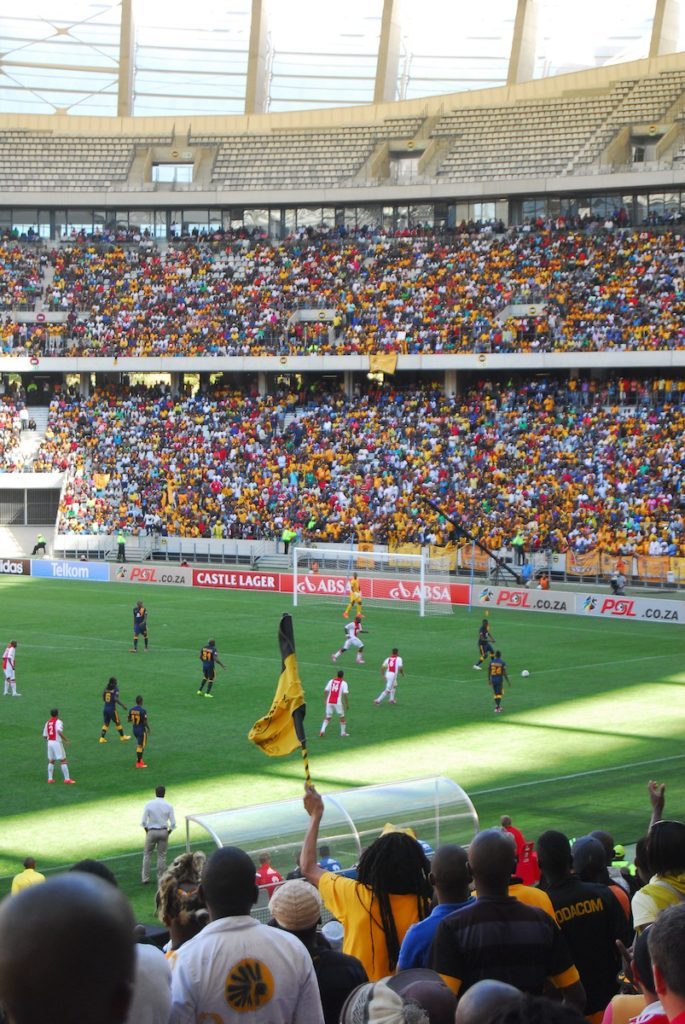 But I didn’t really get into soccer until this year’s World Cup. With the US having a real opportunity to advance, I found myself with a vested interest in the matches and came to really love the sport. Previously, I thought soccer was a bit slow, too. Not so! So this match was pretty fun. 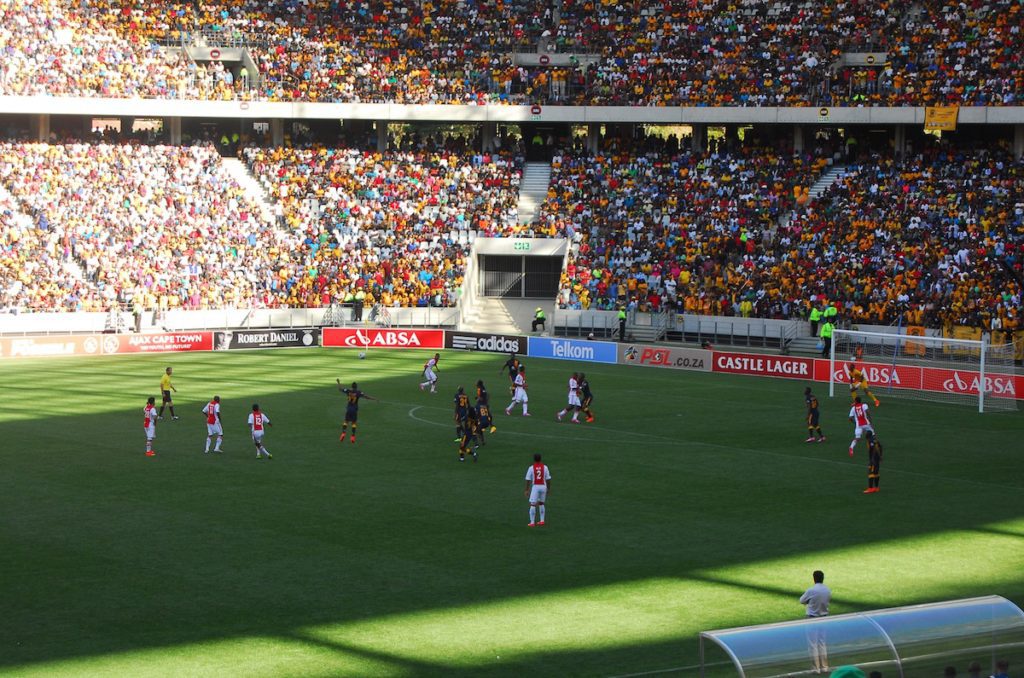 That being said, I also had a lot of fun watching the fans. There were four boys in front of us who clearly played on an Ajax-sponsored youth team next to some incredibly enthusiastic Kaiser Chiefs fans. The poor Ajax boys had a tough day. 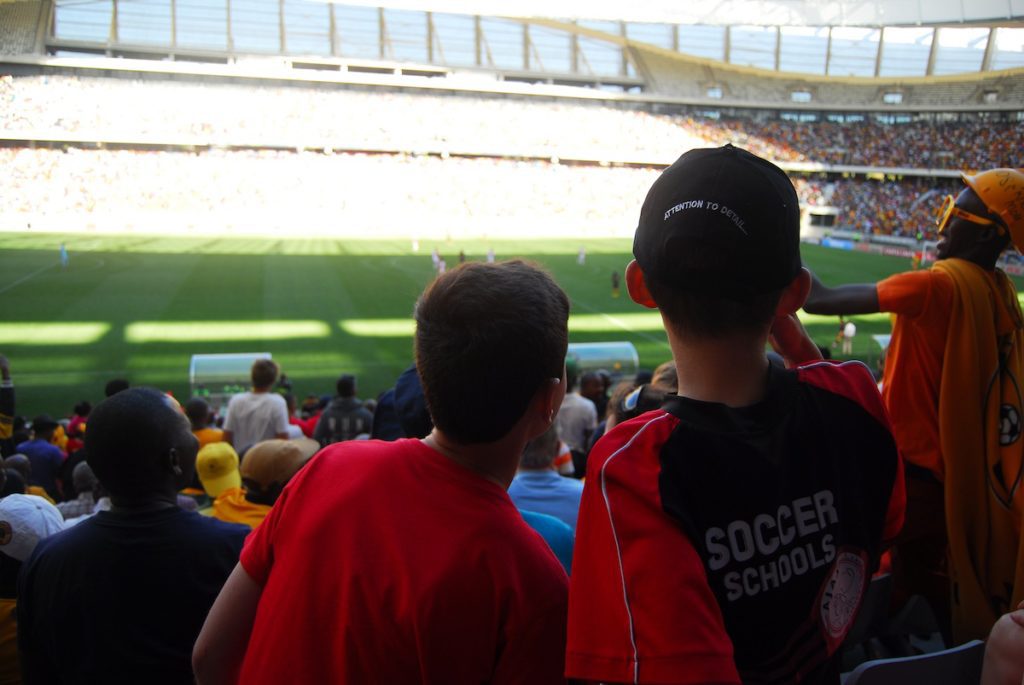 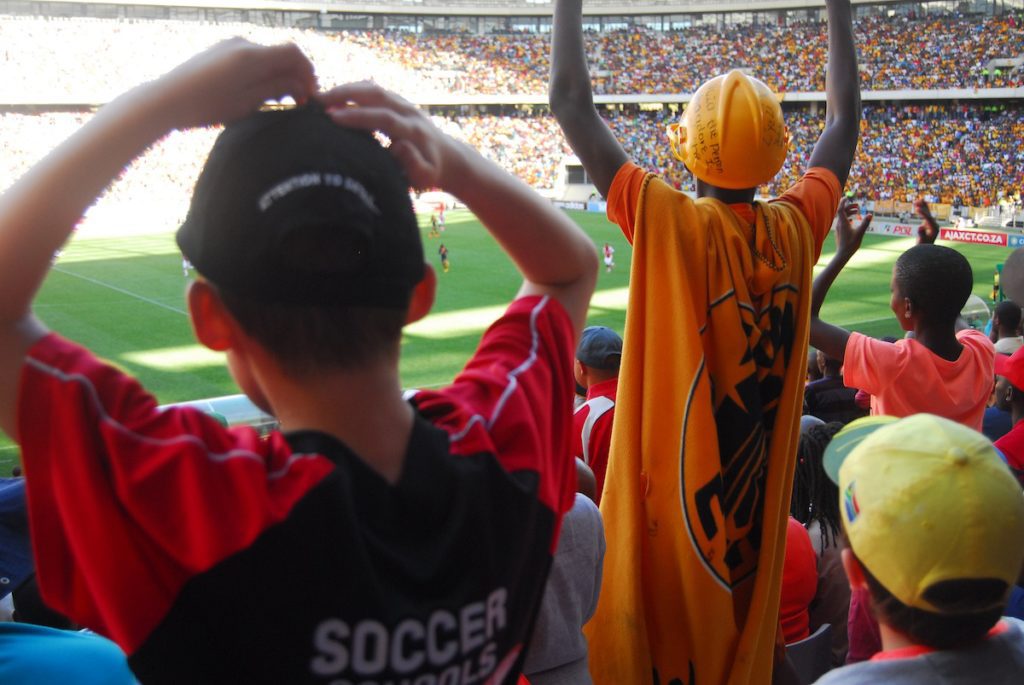 The gentleman with the construction hat and the blanket cape had so much enthusiasm and was incredibly fun to watch. 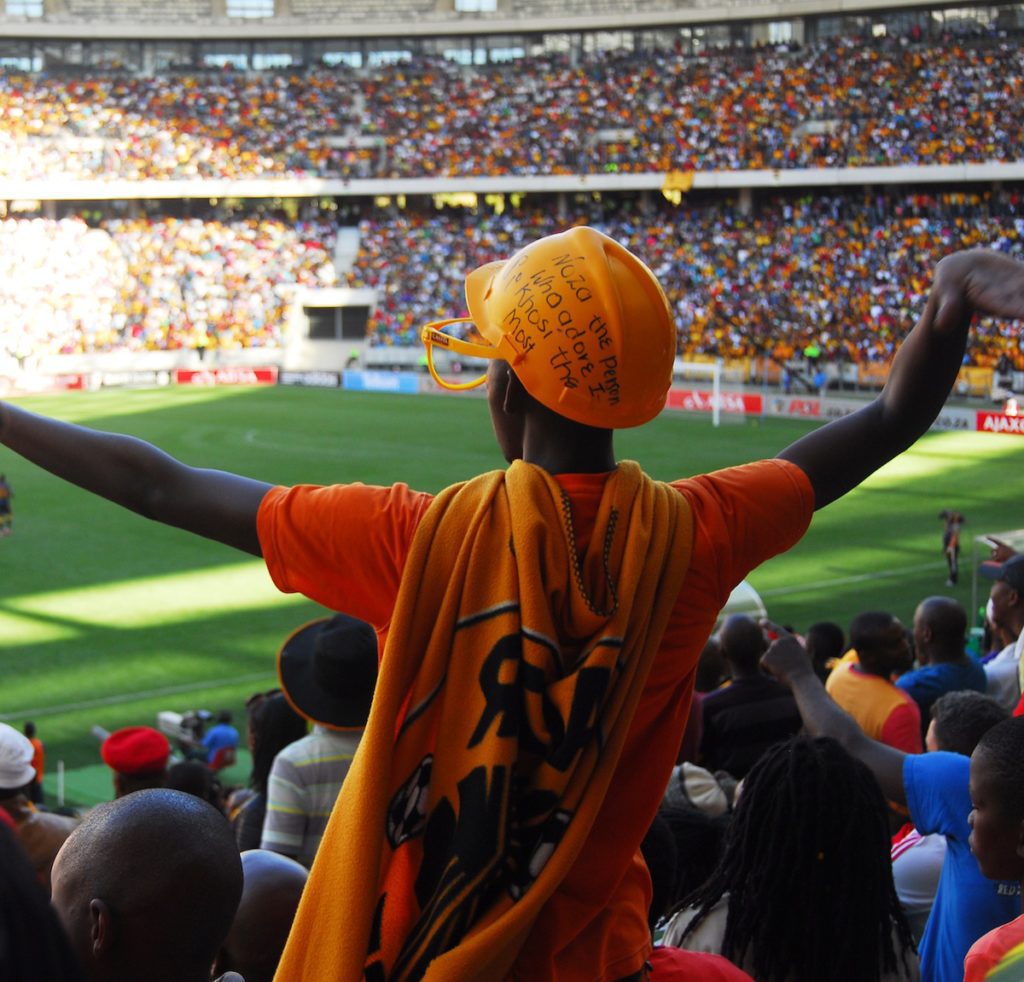 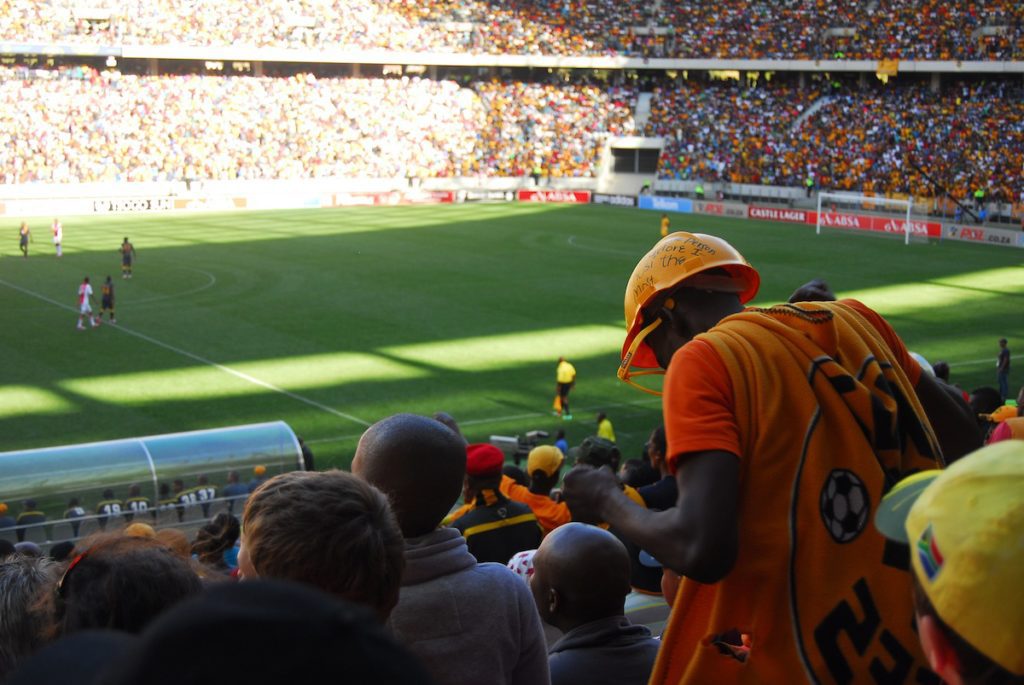 Are you familiar with the noisemaker called the “vuvuzela”? They are long, plastic horns and they are incredibly annoying. Somewhat fun within the context of a soccer match- they make the whole stadium sound like a beehive. But when your fiance gets his hands on one that he blows as hard as he can when you least expect it, they are incredibly unpleasant. And you resort to hiding said vuvuzela or smacking him over the head with it.

Well, some fans next to us had GIGANTIC vuvuzelas! I approve of those beautifully decorated horn things. Outside of my home, that is. 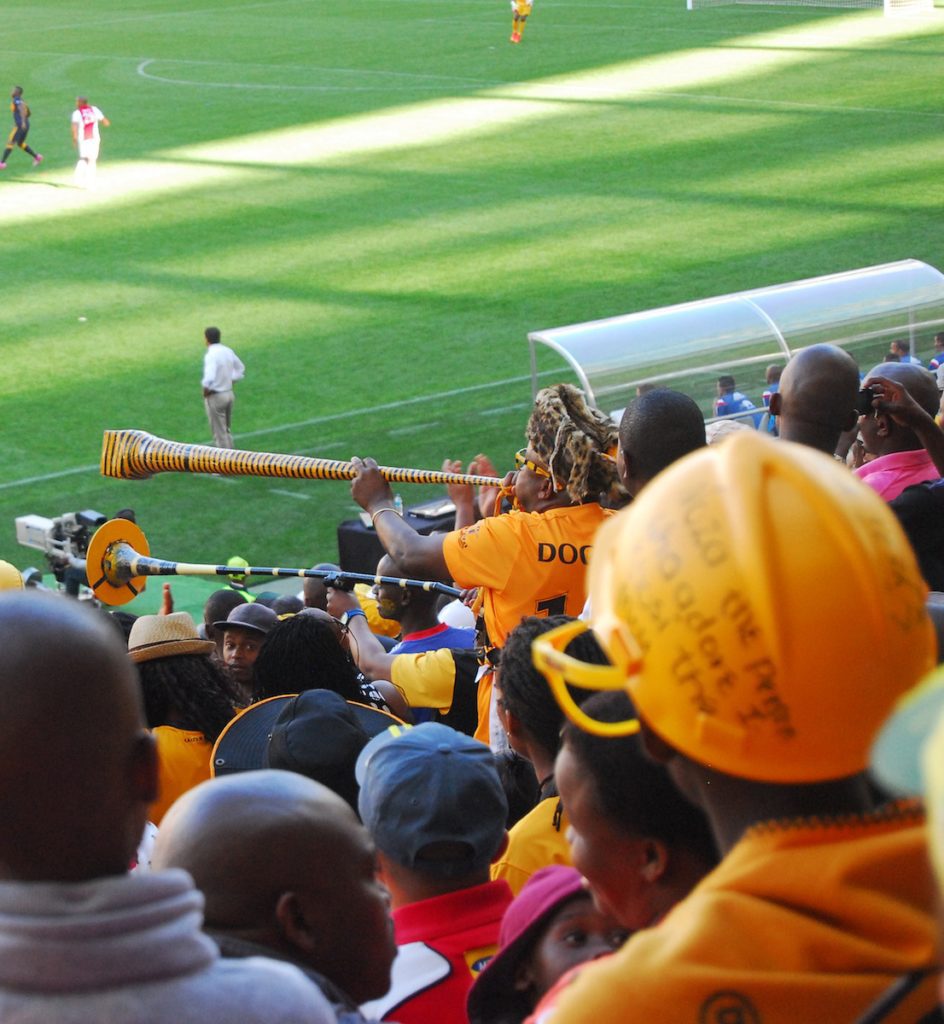 Even with the complications actually getting to the stadium and stealing ourselves some seats, it was a really fun match and Cape Town Stadium lived up to the hype! We even got beers for R20 each, or about $1.50. I have never seen ANYTHING sold so cheaply at a sporting event in the US, let alone a beer, so this alone won me over to sports in South Africa.