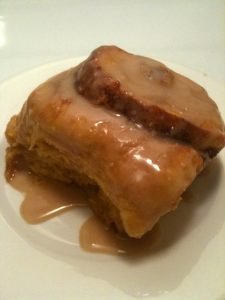 Pumpkin cinnamon rolls. Mmm. This recipe combines two of my favorite things. But I still feel incredibly guilty for making it. Thank god I have a boyfriend and roommate, who actually sent this recipe to me, who will gladly gobble up their fair share.

You see, I had to make them. Today, the game against Washington started at 12:30 p.m., and we got tickets, which meant we needed to leave by 11:15 this morning. Burgers and chicken legs are not something most people want to eat before 1 p.m., but football games require incredible food, right?! So I decided it was finally time to pull this one out of my arsenal.

Oh yeah, the ducks, who are the NUMBER ONE team in the country for the first time EVER (my presence here is good luck, obviously), whooped those stupid huskies 53-16, who we’ve had a rivalry with for quite some time. Nothing like the civil war, but we really, really don’t like people who have the audacity to dance on our “O”.  Also, this was one of the worst games we’ve played, and we still won by 37 points.

I started the pumpkin cinnamon roll process last night, because I knew I wouldn’t have time to do it all in the morning (I’m a college student- I’m not getting up before 8, especially on a Saturday). I started by combining the yeast and water in a bowl and then heating the butter and milk in a small saucepan until the butter had melted. 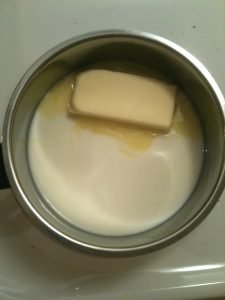 Pour the butter into a heat safe mixing bowl and combine with the sugar until the sugar’s dissolved. Let sit until the mixture is just warm to the touch- not hot. It will kill all your yeast if it’s too hot and then you’ll be sad when it doesn’t rise! Add the yeast/water mixture and pumpkin. Add the salt and the flour. 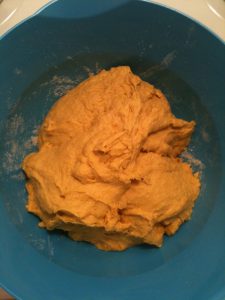 Let sit for 1-3 hours, or until doubled in size. You can shape them after this or refrigerate the dough until later. I did the second option.

When they’re ready to shape, punch down the dough and roll out into a large rectangle on a floured surface. The dough should be about a 1/2 thick. Melt the butter and combine with the brown sugar, cinnamon, nutmeg, and ginger. Spread all over the rolled out dough. Roll the dough into a log long ways- be careful here, the filling likes to squish out. 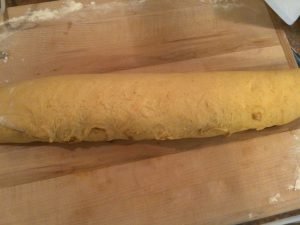 Butter a 9×13 inch baking dish and a cake pan. Cut the log into 1 inch pieces and place in the pans. These get huge so leave a little bit of space in the pans. Let rise for a 1/2 hour, or an hour if you refrigerated the dough. 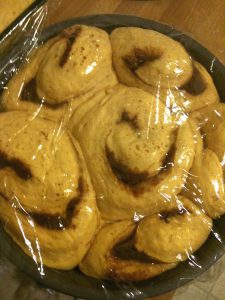 Bake in a preheated 350 degree oven for 20 minutes. While they’re baking, make the glaze by combining the butter, milk, and cream cheese in a small sauce pan. Heat until the butter melts and the cream cheese has mostly broken down. Transfer to a heat safe mixing bowl and add the brown sugar, salt, and powdered sugar. It should be pretty thick, but pourable. Dump all over those rolls a few minutes after they come out. Be generous. It will kind of meld with the rolls and be so, so fabulous. 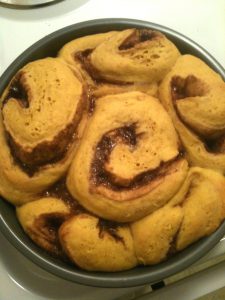 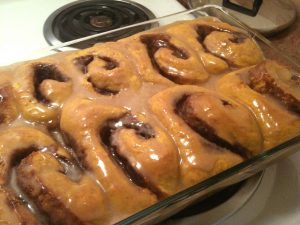 Eat IMMEDIATELY. All of them. Don’t worry, you can have them later, too, just pop them in the microwave for a few minutes. We had ours with bacon and eggs, because we did need some protein to help us through the game. 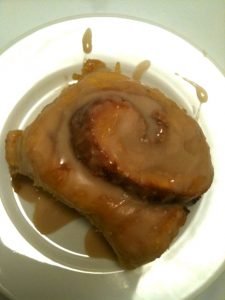 Directions
Combine yeast and water. Let it sit for about ten minutes. Meanwhile, warm the milk and butter in a small saucepan on the stove top until the butter is melted. Combine this with the sugar in a large heat-proof mixing bowl and stir until the sugar is completely dissolved. Let the milk mixture cool until it is warm not hot. Then stir in the yeast and the pumpkin. Add the salt and 5 1/2 cups of the flour, stirring until all the flour has been absorbed. The dough will be sticky, but should come together in a shaggy ball. If it’s still more the consistency of cookie batter, work in an additional 1/2 cup of flour.Cover the dough and let it rise for 1-3 hours. During this time, it should double in bulk. At this point, you can punch the dough down and refrigerate it overnight or continue shaping the rolls. To shape the rolls, sprinkle your work surface with a little flour and dump the dough on top. Pat it down into a rough rectangle and then use a floured rolling pin to roll it into a rectangular shape about a half an inch thick, longer than it is wide. If the dough gets sticky, sprinkle a little more flour on the dough’s surface and on your hands. Melt the butter in the microwave and stir in the brown sugar and the spices. Spread this over the rectangle of dough, leaving an inch of bare dough at the top. Sprinkle one cup of the toasted pecans over the dough, if using. Starting at the edge closest to you, roll the dough into a cylinder and pinch it closed at the top. Rub a tablespoon of soft butter into the bottom a 9×13 baking dish and a 9-inch cake pan, or a large baking dish if you have one. Using a bench cutter or a sharp knife, cut the cylinder into individual rolls 1 – 1 1/2 inches thick. Place them into your baking dishes so they have a little wiggle room on all sides to rise. Cover them with a clean kitchen towel and let them rise until they fill the pan and look puffy, 30 minutes for already-warm dough and 1 hour for dough that’s been refrigerated. Preheat the oven to 350 degrees. When the rolls are ready, bake them for 20-25 minutes, until the tops are golden and starting to look toasted around the edges While they are baking, prepare the glaze. In a small saucepan over medium heat, combine the milk, cream cheese, and butter. When the butter has melted, transfer to a heat proof mixing bowl. Add the brown sugar and salt. Stir until the brown sugar has melted. Stir in the powdered sugar. This should form a thick but pourable glaze.
Let the baked rolls cool for about two minutes and then pour the glaze on top