A Duck’s Oven Does Gameday

First, thank you to all who took part in my poll! You all predicted correctly (despite my nervousness :))!

On to my Saturday!

Saturday, the Stanford University football team came to town and Eugene had the honor of hosting “ESPN’s College Gameday.” “Gameday” is a three hour long college football preview show (on ESPN, as its name suggests!) that broadcasts live every Saturday morning before the day’s college football games on some lucky college’s campus. The show visits the school they think is putting on the most exciting game that weekend, and in the college football world it’s a pretty big deal when the “Gameday” folks choose your school as the site for that week’s edition! So Saturday “Gameday” set up just outside Autzen Stadium (UO’s football stadium) and got started at 6 am pacific time, hours after nearly 4,000 enthusiastic Duck fans (some crazy enough to camp out the night before!) showed up, many bringing clever signs in an attempt to get on TV. Check out this little clip of the show to see what I mean!

My boyfriend, Eric, and I were among the somewhat less insane people standing outside in the dark at 5 a.m. that day. I’ve got to say, it was totally worth it! I’ve become a pretty avid college football fan since our team has become so relevant (did you know we’re ranked #3 in the country?!), so it was really exciting to see something I’ve watched on TV come to life in front of me. I also attended “Gameday” last year when they came to Eugene for the USC game. Below are pictures of my favorite “Gameday” signs. 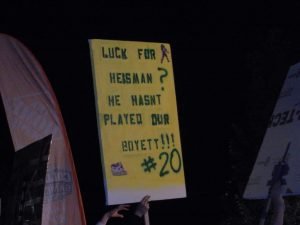 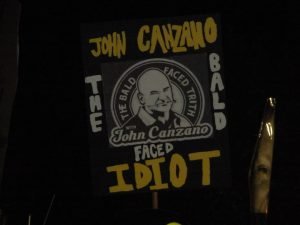 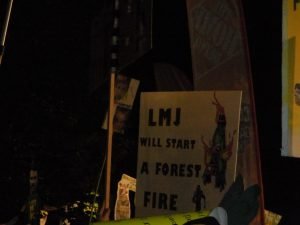 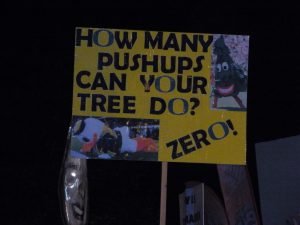 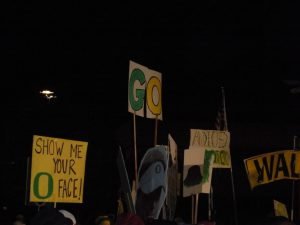 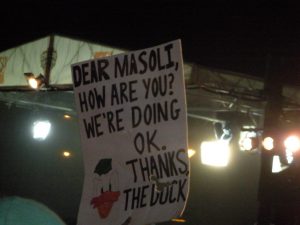 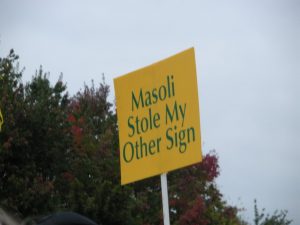 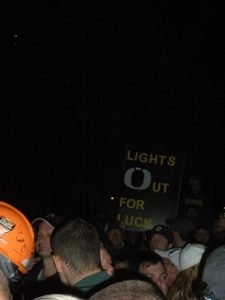 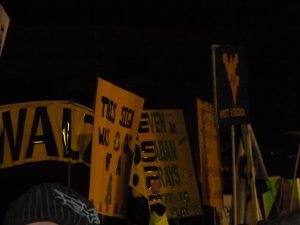 Do you watch Modern Family? You know Phil Dunphy, Claire’s husband, on the show? Well, we were standing next to his brother, I swear! There were rumors that Ty Burrell (Phil Dunphy) would be Game Day’s “special guest”, and when we saw this guy we thought for sure he must be. But alas, there was no special guest. I still believe this man is related to Ty Burrell!

Ducks coach Chip Kelly also visited the show, as well as our beloved mascot, Puddles (the Duck!). Lee Corso, one of “Gameday’s” well-known hosts, ended the morning on a high note by predicting an Oregon victory later in the day, disappearing from the set before reemerging sporting the UO Duck mascot’s head! 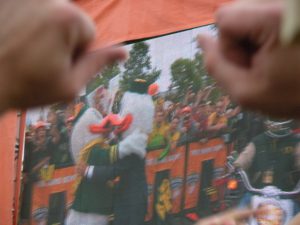 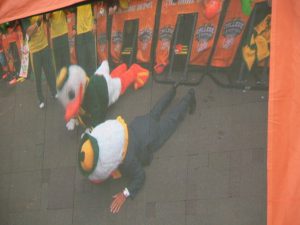 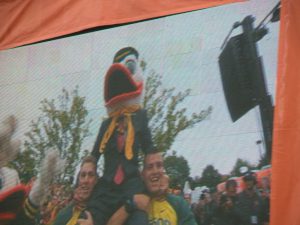 After Game Day, Eric and I got in a few more much needed hours of shut eye. For lunch, or pre-game power food, I made burgers, with home-grown, grass-fed beef from Eric’s aunt, and homemade, spicey, garlicky french fries. Yum. Here’s some pictures with some instruction, look for recipes at the bottom of the post. 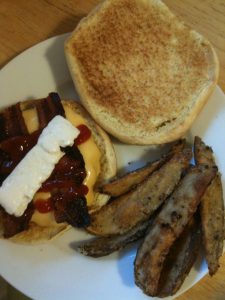 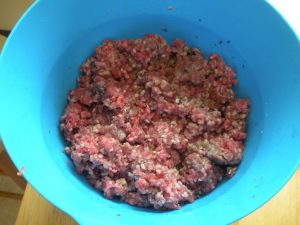 I was apparently a bit distracted and slacked on my photo taking! So pretend you’ve formed that beef into patties (mine made seven), thrown them on your George Foreman Grill (or real grill, if you’re so lucky!), and melted some ooey-gooey American (or your preference) cheese on them! 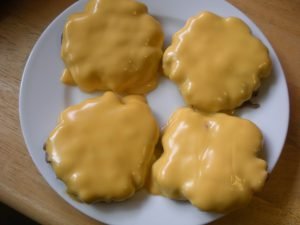 Place on a toasted bun adorn with your toppings of choice. I’m a bacon-ketchup-mayo kind of girl. 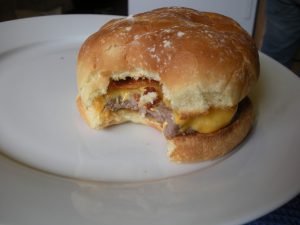 I also slacked on photo taking for the fries… so see recipe below! 🙂 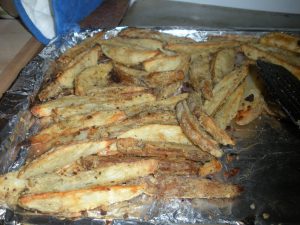 At around 3:45 pm it was back to Autzen stadium in our black duck gear from head to toe (it was a “lights out” game, meaning all the fans are requested to wear black). My darling roommate, Marisa, drove us about half way there leaving us with only about a mile left to walk to the stadium. Really though, the walk is beautiful as you go over the Willamette and through a half mile of fantastic trees. Then we arrived at our beloved Autzen Stadium for the game 🙂 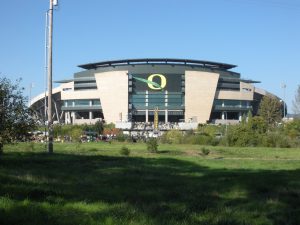 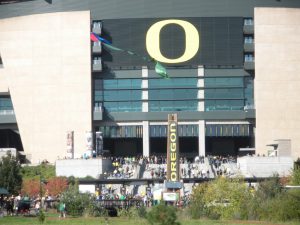 Isn’t it pretty? I guess I’m biased, but it’s a fun place to catch a game!

Here’s the team warming up before the game. 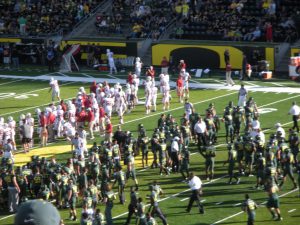 And the cheerleaders and fans giving a warm welcome! 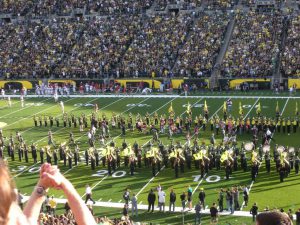 A whopping 59,818 fans showed up. That’s a state of Oregon record for a football game! I didn’t take a lot of pictures during the game because I was borrowing my roommates camera and didn’t want to risk rowdy freshmen knocking it out of my hands. The guy behind me kept trying to crowd surf (and succeeded once… sort of), and the seven guys in black and green tuxes next to me were jumping around. A lot. Not to mention, the majority of students are apparently intoxicated and have trouble keeping their balance. I choose not to be because I like to actually watch the game! 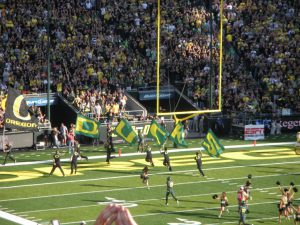 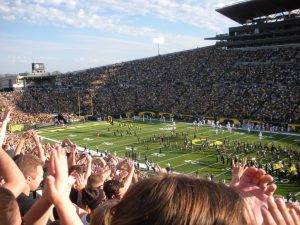 The first quarter was a struggle. I was nervous about this game a week ago, and seeing my team getting run over and down 21-3 was hard. But my ducks pulled through, and the Cardinal didn’t score a single point in the second half 🙂 So much fun!

Despite Autzen Stadium’s relatively small size (only 58,000 seats, although at Saturday’s game nearly 2,000 people came in for standing room only), we have a reputation for being loud. We broke tons of noise records by reaching 123 decibels. I screamed the whole time. We seriously have a reputation.

After the game, Eric and I opted out of rushing the field because we’d been up since 4 a.m. and had to walk the 2 or so miles home! Finished the day with some pizza and talked about the great game we’d just gone to see!

Directions
Combine all ingredients until well incorporated. I recommend putting the beef in the fridge for a while until it is nice and cold. Form beef into patties appropriately sized for your buns. If using a George Foreman Grill, they only take about four minutes to cook (I don’t like to see much pink, so adjust for your preference). I like to place the cheese on the patties while they’re still on the grill.

Directions
Preheat the oven to 425 degrees. After rinsing them, slice the potatoes into french fry size chunks. Put potatoes in a gallon sized ziploc bag with the olive oil and minced garlic. Shake until evenly coated. Save bag. Pour the potatoes into a large microwave safe bowl (you may have to do this with portions of the potatoes at a time) and microwave for two minutes. After they’ve cooled down a bit, put them back into the ziploc bag with the flour, cayenne pepper, garlic salt, Italian seasoning, and bacon bits. Shake until well-coated. Transfer potatoes to a foil-lined cookie sheet and put in oven for 30-40 minutes. French fries are done when golden brown.