2 hours
8 servings
It is so easy to make infused vodka with sous vide cooking. Try this rhubarb and orange variation for a take on homemade Aperol! It takes just 2 hours instead of several weeks for a typical infusion.
Drinks & Cocktails Sous Vide 1.5 - 2.5 Hours Spring Summer
Jump to Recipe
posted by Chelsea Cole on May 4, 2021 (last updated Mar 8, 2022)
This post may contain affiliate links. 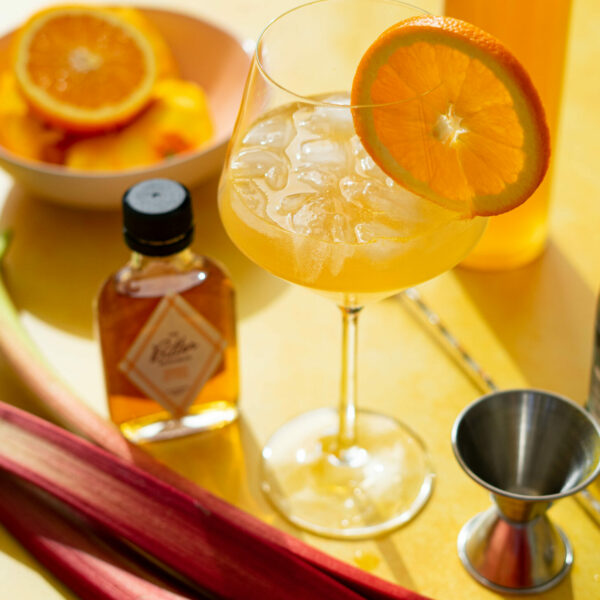 It is so easy to make infused vodka with sous vide cooking. Try this rhubarb and orange variation for a take on homemade Aperol! It takes just 2 hours instead of several weeks for a typical infusion.

I looove an Aperol spritz (don’t we all?). After having my first and picking up my own bottle of Aperol, I did some research to figure out well… what the hell Aperol is. It turns out the recipe is “secret” other than rhubarbs, oranges, and “various herbs and spices”, so I set out to make my own version.

This isn’t a perfect dupe for Aperol, but it’s close and I would argue… better. There’s less of a mysterious chemical taste, it’s not as sweet, and you can control the bitterness to your liking.

And even better… you can get this infusion done in just 2 hours with the magic of sous vide! I love making sous vide liquor infusions because you can get great flavor without waiting a week or two, as you would typically for an infusion.

How Do Sous Vide Infusions Work?

Sous vide is great for infusions because it allows you to heat a liquid without evaporating it since the liquid is in an enclosed container.

A traditional infusion calls for you to add your liquor (or oil, or what have you) to a container, your selected fruits, herbs, spices, etc. and let them sit together for a week or two for the flavors to slowly impart.

With sous vide, you do this same process but add the container to a temperature controlled water bath to speed things up, reducing the time to two hours. You can use a bag, but I typically use jars for my infusions.

If you’re already setup to sous vide, you won’t need to add much to your collection! Outside of the ingredients, here is the equipment you’ll want:

How to Make Homemade Aperol

You aren’t even ready for how easy this is. Start by using a vegetable peeler or sharp pairing knife to remove the orange part of the rind from the oranges and try to get as little white rind as possible. The white part is bitter, and we’re just looking for bright, citrus flavor here.

Thoroughly wash the rhubarb and cut the stalks into large chunks.

Add the fruit to a large jar, then pour the vodka over the fruit into the jar. Add to preheated water bath and cook at 135 degrees F for 2 hours. Make sure the contents of the jar are completely submerged.

While the vodka mixture is cooking, make the simple syrup by combining orange juice, water, and sugar in a saucepan over low heat. Cook until sugar is completely dissolved, stirring occasionally, over low heat. Let it cool to room temperature.

When the vodka mixture is done cooking, strain the vodka into the pot with the simple syrup and discard the fruit. Whisk to combine.

Taste the mixture, then add orange bitters a few dashes at a time, stirring and tasting in between, to your desired bitterness. When making cocktails, you’ll likely be cutting the mixture, so don’t be afraid to go bitter-heavy.

Pour the mixture into a large jar. There’s no need to store in the fridge but you can if you want!

To make a homemade aperol spritz, add ice and 2 oz of the vodka mixture to a large wine glass. Top with prosecco and enjoy! 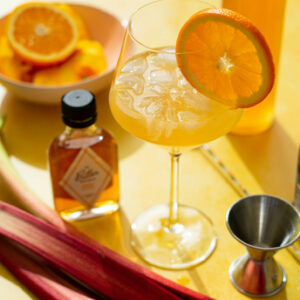 Use at least decent quality vodka. It doesn’t have to be the best vodka available, but you’ll want some that’s good enough to drink on its own. Remember that you’ll be drinking this, so use whatever drinking water you normally would.
Cuisine: Italian
Course: Drinks
Author: Chelsea Cole
Serving: 2oz
Did you make this recipe?Mention @aducksoven on Instagram or tag #aducksoven.
Drinks & Cocktails Sous Vide 1.5 - 2.5 Hours Spring Summer