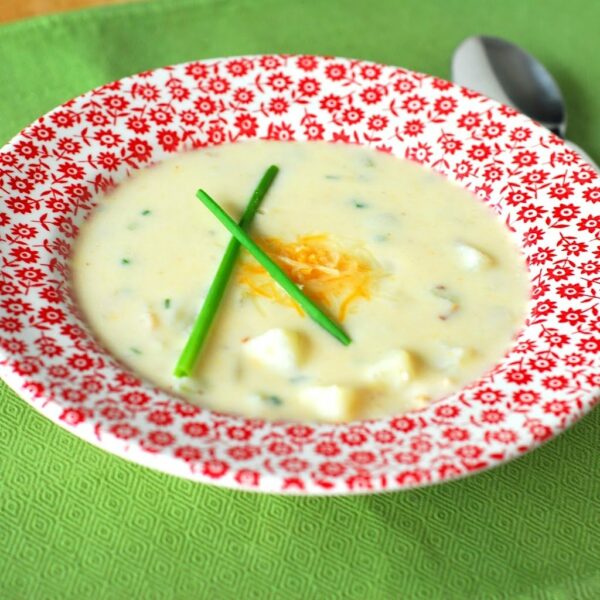 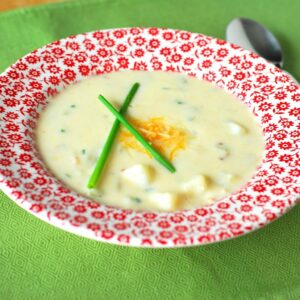 I really, really like soup. Boyfriend thinks I’m super weird for this, but for me, nothing hits the spot like a perfect bowl of soup. And creamy soups, like chowders- they really get me. If for whatever reason (ahem, like laziness) I don’t bring my lunch to work, I often stop by Safeway and grab a bowl of their baked potato soup. I’m usually not a fan of grocery store deli stuff, but that soup is awesome.

Even so, I’m aware that it comes with a hefty punch of calories, so I took on the challenge of making my own, lighter version!

After scouring the interwebs for techniques for lightening creamy soups, I decided on the cauliflower method. There is no heavy cream, no flour, no cornstarch, yet it’s still thick and creamy. I now consider cauliflower to be a miracle food.

To create the cauliflower base, I simply boiled a head in about 2 cups chicken stock then pureed it together! I know what you’re thinking- doesn’t this affect the taste? Not at all. If I hadn’t known about the cauliflower I never would have guessed, it’s simply just a great thickener! 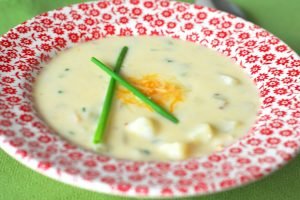 It keeps great, too. I ate it for lunch for a week! I’m really excited to try the cauliflower method out on other soups!