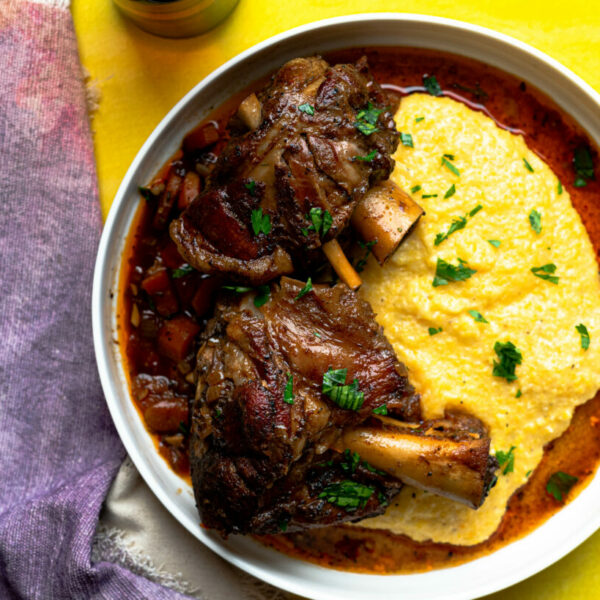 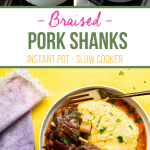 Beer braised pork shanks make for a hearty stew that can be cooked on the stovetop, pressure cooker, or slow cooker. This recipe calls for bone-in pork shanks for big, delicious flavor.

I made pork shanks! Scary, unfamiliar pork shanks. My favorite meat source, Porter Road, has had them on their website for a while, and I finally got a couple so I could see what this cut of meat has to offer.

Although you’ll typically find sous vide recipes around here, this time I went traditional (although it’s a safe bet a sous vide version is coming).

These pork shanks are delicious served with a simple parmesan polenta, mashed potatoes, or scalloped potatoes. In other words, serve ’em with carbs, please. Maybe some brussels sprouts for good measure.

What are pork shanks?

Pork shank is a cut that comes from the front forearm of the pig. This is a muscle-y, tough cut of meat. There’s a large bone with meat surrounding it, which means all kind of melty marrow when you cook it slow.

Which cooking method should I use?

You should cook pork shanks low and slow, so the meat can fully break down and you can make the most of that big bone. This is the kind of cut you want to be fall apart tender.

Here are the cooking methods I recommend, ranked in order of the amount of time they’ll take to prepare:

No matter what method you use, you’ll start by seasoning and searing the meat and you’ll end by looking for meat that falls away from the bone and shreds easily. If this hasn’t happened, keep cookin’.

How to braise pork shanks

For step by step instructions, check out the Google Web Story.

You can use any liquid you like for braised pork shanks, but I chose to use beer. A dark beer, like a stout or an Oktoberfest, are great choices for imparting lots of flavor. You could also use a red wine (I’d recommend something lighter, like a pinot noir), or beef or chicken stock.

But first things first: season! I wanted my braised pork shanks to have a smoky flavor, so I went with the Chili Coffee seasoning blend I developed for pork chops in my cookbook, Everyday Sous Vide. Once thoroughly coated in seasoning, sear the pork shanks in ghee over medium high heat in a heavy bottomed, high rimmed pot or dutch oven.

Remove the pork shanks to a plate, and in the same pot, add garlic, onions, and carrots and cook until softened.

Once softened, deglaze the pot with your liquid of choice. Again, I used beer and I also used some chicken stock.

If you are cooking the braised pork shanks in an Instant Pot or slow cooker, transfer the liquid and veggies to the pot of that device. Then add additional seasonings, including a bay leaf, salt to taste, and dried herbs, to the pot. Stir, then add the pork shanks.

Then let it all cook for a reeeaaally long time, rotating the shanks every so often so the meat is evenly submerged in the liquid. Once it easily pulls away from the bone and shreds, it’s ready.

You can just spoon the braising liquid over the top when serving for a delicious sauce, but for more of a gravy like sauce, melt 1/4 cup butter in a skillet. Add 1/3 cup flour and cook for 3-5 minutes over low heat. Add the roux to braising liquid after removing the shanks and stir until liquid has thickened.

What to serve with braised pork shanks

I chose to serve the beer braised pork shanks with cheddar grits, because CHEDDAR GRITS, amiright? I get my grits from Thrive Market. They would also be delicious served with Mashed Cauliflower for a lighter option, sous vide mashed potatoes, or gruyere scalloped potatoes. As you can see, I recommend something carby to soak up all the delicious braising liquid.

For drinks, I recommend whatever your braising liquid was: a dark beer or light red wine. I’m a sucker for Oregon pinot noir, my fav lately has been Pike Road Pinot Noir.

Where to Buy Pork Shanks

Pork shanks, also known as pork hocks, are definitely a butcher’s cut and a little harder to find. You can go to your local butcher and hope for the best, but if I were you, I would get them from Porter Road!

Can I make this in the slow cooker?

To make pork shanks in the slow cooker, cook on low for 8-10 hours.

Can I make this in the Instant Pot/pressure cooker?

To make pork shanks in a pressure cooker, cook using the manual setting for 90 minutes and use the manual release.

Which beer is best to use?

For braised pork shanks, braise with a dark beer, like a stout or an Oktoberfest, to impart lots of flavor.

Can I substitute beer?

You can also braise pork shanks in red wine (I’d recommend something lighter, like a pinot noir), or just beef stock.

If you make this recipe, it would mean the world to me if you’d rate and review below! It helps other people find this recipe, too. 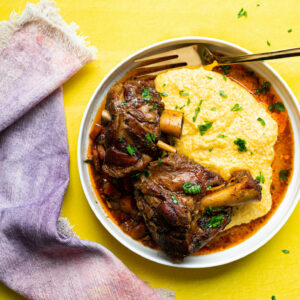