posted by Chelsea Cole on April 27, 2014
This post may contain affiliate links.

Fiance really loves the beach. Like, really, really loves it. Bordering on obsession. He mostly loves warm, turquoise waters, but the beaches of Oregon did the job for most of his life. Living in Cape Town has been a dream for him, because we’ve gotten to explore at least one new beach almost every week. And they are all unbelievably stunning.

Last weekend, he told me he wanted to take me to a beach that was “off the beaten path.” My response: “Uuummm…” This immediately sparked concern. Fiance is relatively adventurous, I am not. I like to park in local public parking and then walk 300 feet to the beach. A beach that is clean with restaurants and bathrooms nearby.

Eventually I decided I could just refuse if we got there and it was clearly dangerous. I brought snacks and made sure my phone was fully charged just in case I ended up waiting in the car.

On the way to this mystery beach, we had our first baboon sighting! The first hint that something weird was happening was the sudden appearance of a man in a reflective vest, flapping his hands wildly and desperately trying to communicate something to us. It soon became clear that he was trying to get us to slow down, as we saw up ahead that a ranger was trying to help some baboons cross the road! 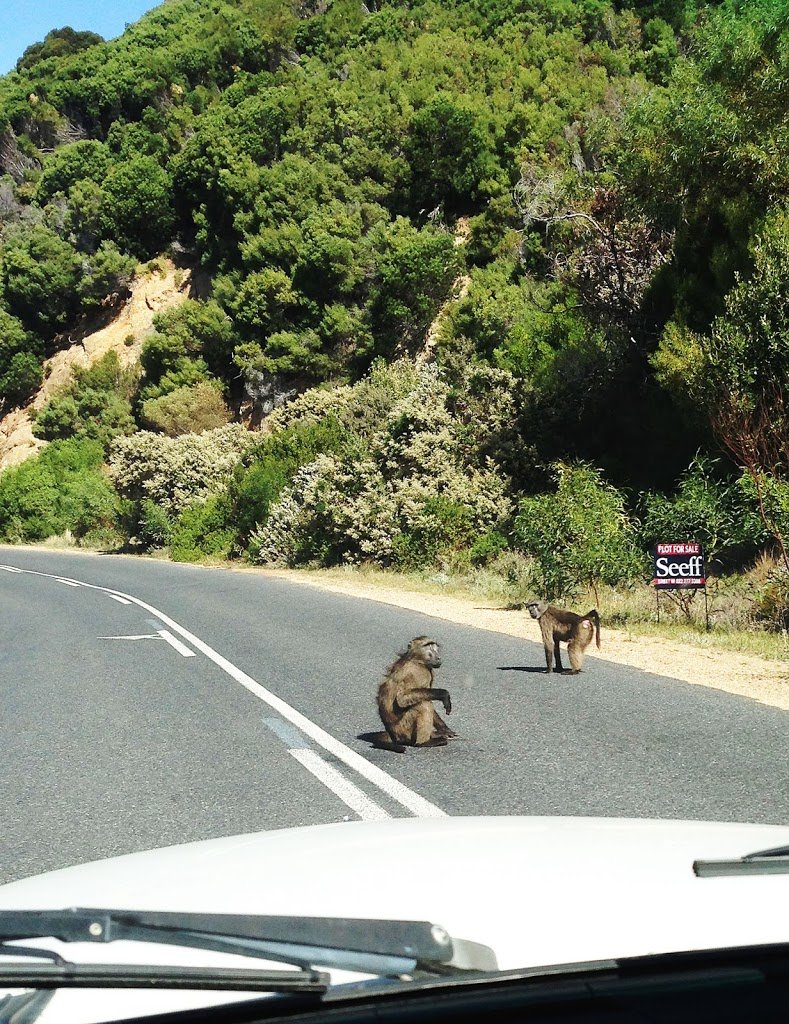 The baboons didn’t look eager to make the rangers’ job easy; they were happy to just sit and hang out in the road. That was okay for me, because it gave me time to whip out my phone and take a picture. There are baboon warning signs all over this area telling hikers and beachgoers not to feed them (“THEY’RE DANGEROUS!”), and a few minutes earlier Fiance and I were joking that maybe this was an elaborate scheme designed to lure adventure-seeking tourists further down the peninsula because, during our many adventures out that way, we’d yet to encounter any!

Eventually, we got to the trailhead and parked the car. There was indeed a real trail (or at least there used to be one) with real signs, so I decided it was safe enough to at least attempt. Not to mention, this view talked me out of it every time I thought about enjoying my almonds from the safety of the car. 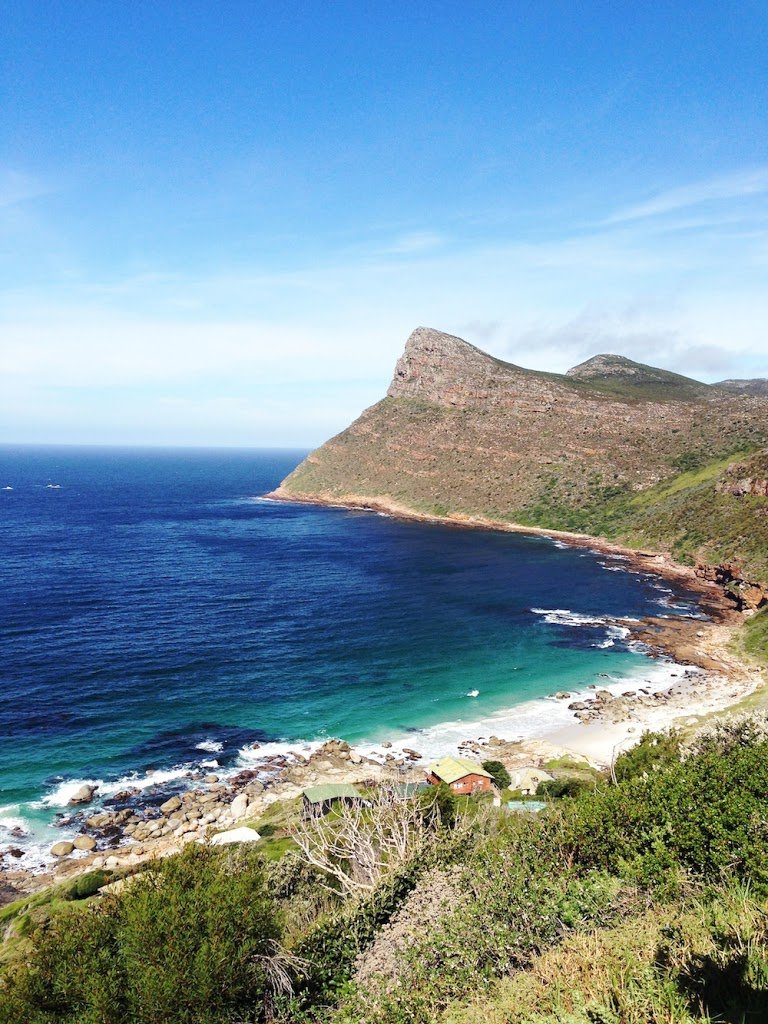 The trail wasn’t too treacherous and we only encountered one broken “footbridge”, but the scary part of the trail was running into several piles of (what I hope was) baboon poop. Fiance also has an annoying habit of running ahead of me when we’re hiking and exploring. I have a serious issue with clumsiness that my mom says I inherited from my dad’s side of the family, so I take my steps carefully and cautiously. Fiance just gets excited about and distracted by what’s at the end of the trail and doesn’t realize he’s 200 feet ahead of me until I yell at him and scold him with my eyes. If I can hardly manage a trail, I can’t be expected to take on a baboon all by myself.

We finally got to the bottom, and it was definitely worth it.

The nearly empty beach had warm, turquoise water and clean, white sand. The views were incredible and there were plenty of piles of boulders for Fiance to climb on. I joined in for some of this, but ended up scraping my elbow fairly bad, so I took in the sights from a lower lying rock.

After spending a few hours exploring the beach, we made our way back up the trail. This was even less fun than coming down because now I had to exert physical effort and watch my clumsy feet and aggressively remind Fiance not to abandon me to the baboons that I was sure were waiting for me just outside the tree-lined trail.

On our way home we passed Boulders Beach and decided to pay a visit to our feathered friends. We went to a free area with a little trail we hadn’t been to before and saw plenty of penguins along the way. 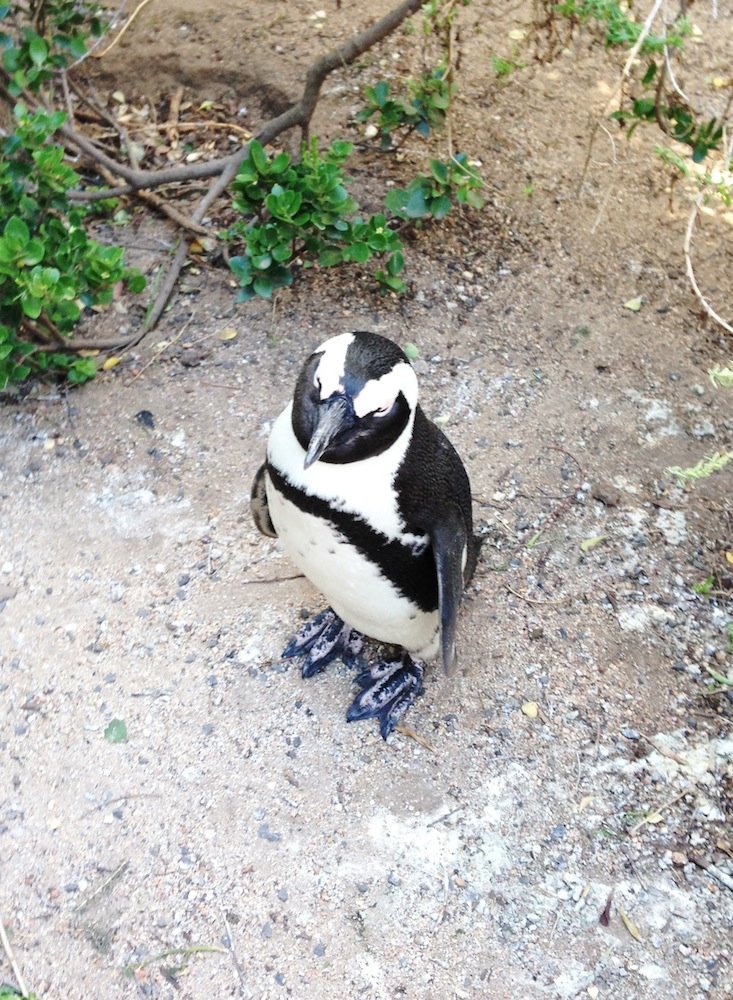 All in all, it was an excellent Saturday! It’s an amazing thing to be living in a city where we can do all of these things in one day, and better yet, we can do them all for free!