10 minutes
If you're looking for the ultimate whiskey cocktail, try this twist on the classic whiskey sour with the addition of a rosemary nectarine simple syrup!
Drinks & Cocktails
Jump to Recipe
posted by Chelsea Cole on December 9, 2014 (last updated Jan 30, 2023)
This post may contain affiliate links. 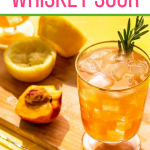 If you’re looking for the ultimate whiskey cocktail, try this twist on the classic whiskey sour with the addition of a rosemary nectarine simple syrup!

Fiance has really loved whiskey for a while, but it’s taken me sometime to get on the bandwagon, even with a dad who loves the stuff, too. After a few frustrating instances of me just not enjoying what Fiance knew was an excellent whiskey, he decided I might need a softer approach. Something to help mask the overwhelming alcohol-y-ness of straight liquor. So he tried making me a whiskey sour. Let’s just say it was effective.

By now, I usually do enjoy a straight whiskey if it’s good, but a whiskey sour is still one of my favorites. In fact, the classic whiskey sour is going to be Fiance’s “signature cocktail” at our wedding! I wanted to do some experimentation with simple syrups and, better yet, I wanted to do a more seasonal version of the whiskey sour. Nectarines are just barely still in season and rosemary screams of the holidays, aaaaand I happened to have both on hand. It’s nice when my unwillingness to go to the store (which is about 100 feet out my front door) works out.

How to Make Simple Syrup

Have you made simple syrup before? If not, there’s nothing to fear. It’s simply (yes, bad pun intended) equal parts sugar and water. Combine those in a small saucepan over low heat and add rosemary springs and a cut up nectarine to steep. Stir the mixture fairly frequently. The goal isn’t really to cook the sugar because we don’t want a caramel flavor, just to dissolve it and cook off some of the liquid to make it syrupy.

Simmer and steep for 5-10 minutes!

How to Make a Rosemary Nectarine Whiskey Sour

To make the cocktail, fill a rocks glass with ice and add an ounce of simple syrup, two ounces of whiskey, a half ounce of lemon juice, and give it a stir. We topped ours off with soda water, but this is totally optional. Play with the proportions to find the right sweetness and strength for your taste. Fiance likes his with more booze and lemon juice than me. I just like lots of sugar!

Even though the food and treats around this time of year are fantastic, don’t forget about the drinks! There are so many fun cocktails and mocktails to be had. 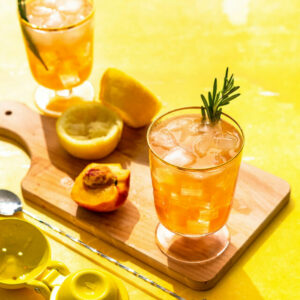