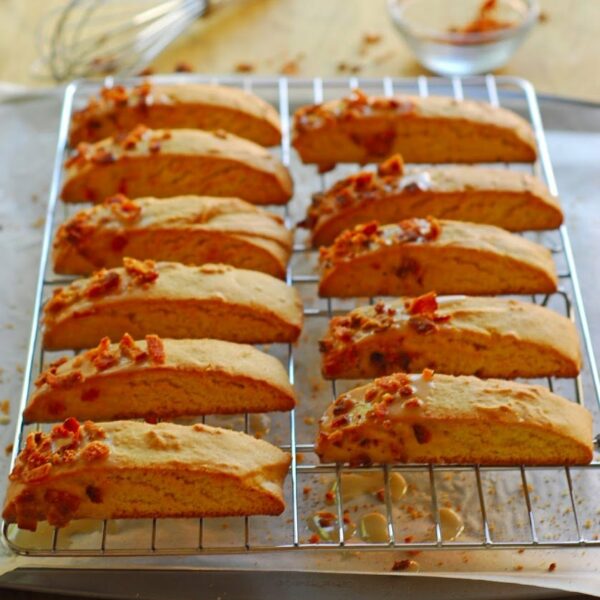 On Saturday morning, I was cooking up some bacon to have with my eggs for breakfast. I love the smell of bacon. I wish that I could smell bacon all the time, except that it might drive me insane. It got me dreaming about bacon and maple things and inspired a brain storm for new mapley bacon treats. It took a bit of narrowing down, but finally I came up with these biscotti.

Then I had to make some other decisions- would bacon go right into the dough? No, that seemed too weird and I thought it might burn the bacon. So I ultimately decided on dipping them in icing and sprinkling with bacon bits. And it was mighty fine.

Start by making the dough. It was very simple: eggs, oil, sugar, maple syrup, baking powder, and flour. It’s a very thick dough. Then lay it out into two relatively evenly sized, 4 inch wide, 1/2 inch thick rectangles. Shape it as best you can with an oiled spatula.

Bake them at 375 degrees for about 20 minutes, or until slightly golden. Remove from the oven and immediately cut into one inch strips with a pizza cutter.

Lay them on one side and return to the oven for 3 minutes. Flip, then bake for another 3 minutes. They should be golden all over. Throw ’em on a cooling rack for 20 minutes and enjoy the glorious smell.

While the biscotti are cooling, cook several strips of bacon and drool even more over the glorious smells happening in your kitchen. Crumble ’em up into bits.

Once the biscotti are completely cool, dip them in the icing and then sprinkle with the bacon crumbles. I don’t recommend rolling them, it doesn’t look as pretty. And I like pretty looking biscotti.

They’re so tasty! They totally rival the increasingly popular male bacon donuts. And it somehow feels more justifiable for breakfast. 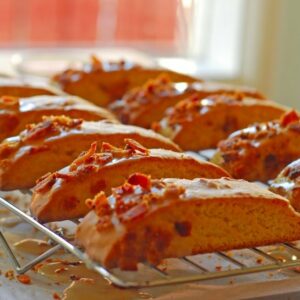