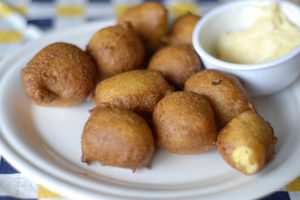 A few weeks ago, I had hushpuppies for the first time. Hushpuppies are known for being a Southern staple of fatty-fried-goodness, yet I somehow managed to try them for the first time in Eugene, Oregon. It’s not like I haven’t had the opportunity to try them in the South. I spent two weeks all over Florida and somehow managed to have no traditional Southern food. I did, however, enjoy Mexican food, breakfast, Red Robin, more Mexican food, Pizza Hut, and even some Cuban food, but no Southern fare.
Even so, the hushpuppies that I did have, in Oregon, were awesome. Maize Lounge, a branch of the Eugene restaurant Cornucopia, serves them with their chili (or on the side of any other dish you might request) and they’re are perfect little corn-stuffed deep fried balls. 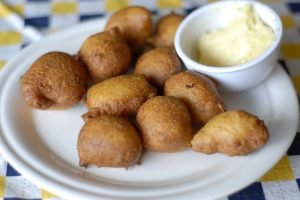 Although inhabitants of North America have been frying corn-based dough for hundreds of years, many say that the hushpuppies we know today originated during the civil war when soldiers would fry leftover batter and feed it to their dogs to “hush” them. I’ve also read (although I’m not sure where) that they became popular during the civil war era because people in the South didn’t have a lot of extra money so they would make use of every part of a meal, including left over batter.
No matter how they came to be, hushpuppies are fabulous, especially with some honey butter. And here’s how you can make ’em.
To make the batter, start with a good helping of cornmeal. 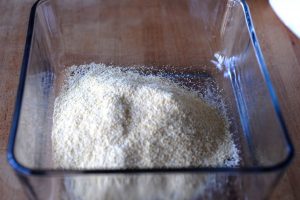 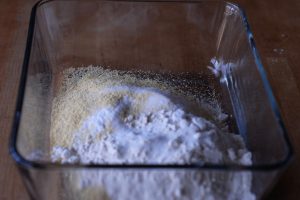 Then some buttermilk, and mix it all up! 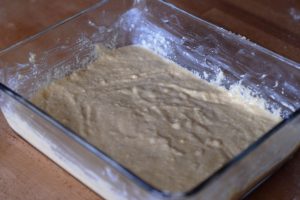 Heat up some oil on the stove. Test the heat by dropping in a tiny bit of batter. Once it’s sizzling, you can start cooking the rest by dropping in spoonfuls at a time. Note: I sincerely apologize for the lighting above my stove. 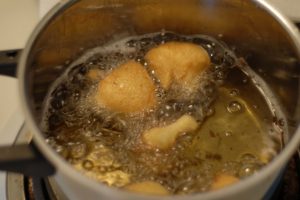 Then, when they’re nice and golden on both sides, put ’em on a paper towel to soak up some excess oil.
And serve ’em along side some honey butter and fried fish. Or with soup. Or with grilled chicken. Or just by themselves. Anyway is fine, really. You can also add things to the batter, such as onion, chives, fish, cheese, or anything else you can think of! 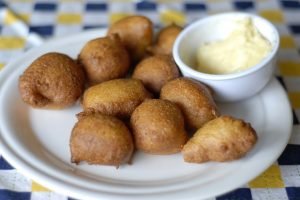