posted by Chelsea Cole on December 29, 2010 (last updated Mar 15, 2022)
This post may contain affiliate links.
One of the homemade gifts that my family and friends received for Christmas this year was homemade vanilla extract. I’m sure many of you have seen tutorials for this, but for those of you haven’t, look no further! This is super easy, and it’s nice to know how the ingredients you use when baking are made.

Before I start, go look at the ingredients on the bottle of vanilla extract in your cupboard. Alcohol, vanilla beans, and (sometimes) sugar. Very simple.

First, find cute bottles that are relatively air tight. I used these from Ikea (photo from http://www.ikea.com/us/en/):

They were perfect, but it was too bad that they only came with one spout top. $8 for a three pack, and I bought two.

You’ll want at least two vanilla beans per bottle. I found ten packs of vanilla beans at Costco for about $8, much better than buying them individually at the grocery store for more than a dollar each. Vanilla beans are NOT friendly on the college student budget.

My vanilla beans were longer than my bottles, so I began by cutting them in half. Doing so is totally optional. Next, slit them open lengthwise, all the way down. Put at least two beans, or four bean halves, into each bottle.

Now, for the vodka. If you are slightly below age like myself, go talk your mom/friend/older sibling/nice stranger into making a run to the liquor store for you. You can definitely use cheap vodka, which is especially convenient if you’re making gifts for multiple people. I used Oregon Springs. Stay classy.

I poured a little more than two cups of vodka into each bottle, over the beans. If you’re planning on using bigger bottles, use more beans. This isn’t an exact science- you just want a high enough bean to vodka ratio to make a strong mixture.

Close the bottles, give them a good shake, and put them somewhere to store for at least six weeks. Shake them every so often.

Ta da! You have homemade vanilla extract. You can add sugar if you like, but I chose not to. I feel like it’s more “pure” or something that way. Not to mention, almost everything you’re adding vanilla extract to already has sugar. 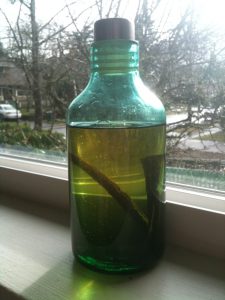 Also, this smells amazing. Even better than that store bought stuff.
Best of all, it’s “never-ending”. When it starts to get low, just top it off with more vodka. If you feel like it’s getting weak, just add another vanilla bean. Total, I spent $30 and made six Christmas presents. Not too bad, I think!
Happy baking, and enjoy your New Year!
Dessert 3.5 - 5+ Hours