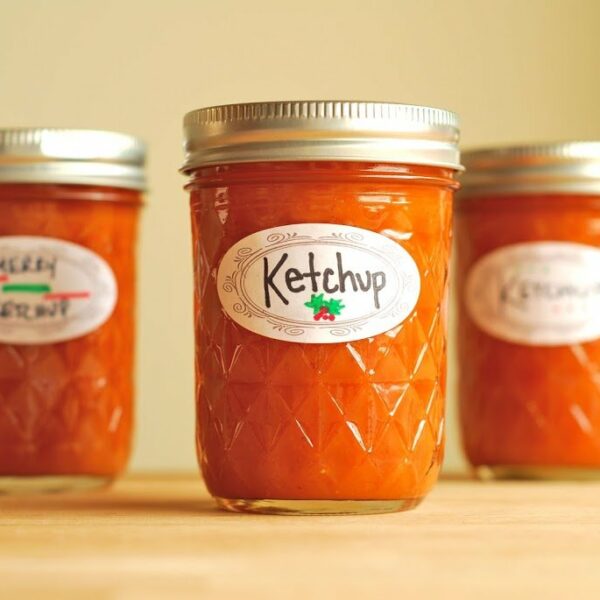 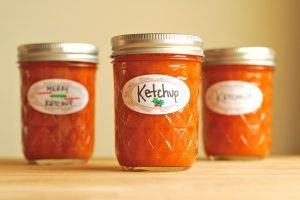 A Duck’s Oven just made the move from Eugene to Portland. It was sad and scary and really, really sad, but the adventure has been fun thus far! I’m living in a fantastic neighborhood filled with incredible restaurants and having a wonderful time decorating a new apartment. My kitchen is going to be fantastic and I’m very excited to take you on a tour of it once it’s finished!

Anywho, all those lovely restaurants are what inspired this post. So many of them use local ketchup (I don’t want to type … catsup … at least more than that one instance- it just irritates me) and that ketchup is so tasty, so I thought, why not whip up my own? And better yet, if it turns out good, why not dole it out to friends and family as a Christmas gift?

The process ended up taking longer than I expected, but it was relatively easy and really fun. To start, roughly chop an onion. 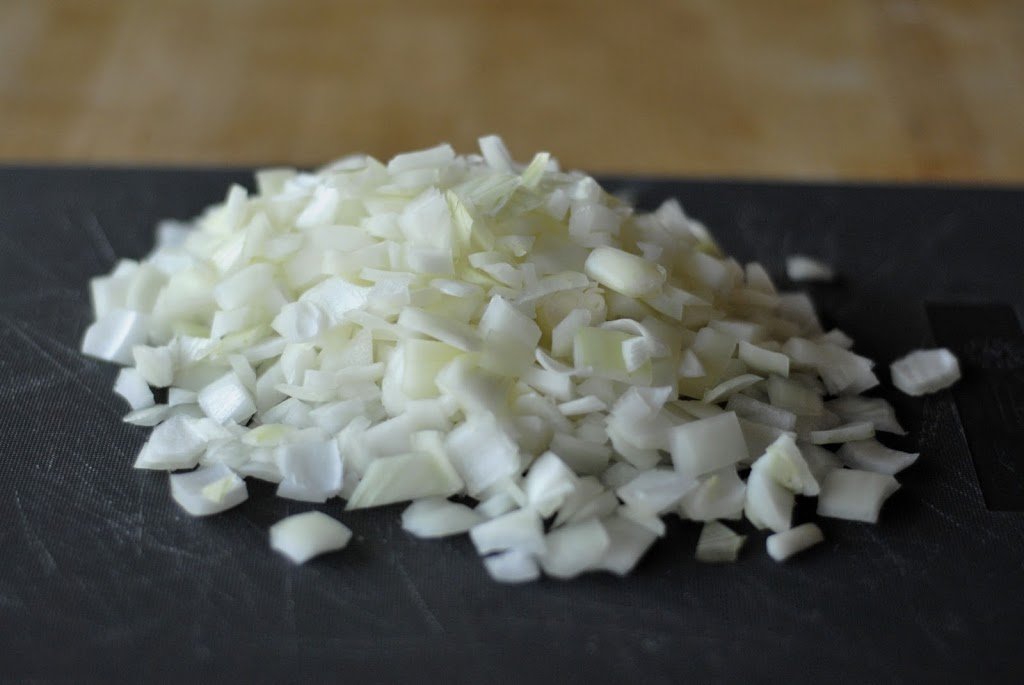 And a couple of celery stalks. 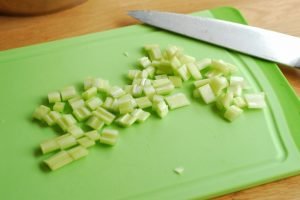 Pour a little bit of olive oil into the bottom of a stock pot. Make sure it’s nice and deep- you’ll be using an immersion blender later and the deeper the pot, the less likely the splatter. I’ve had to learn this lesson the hard way. 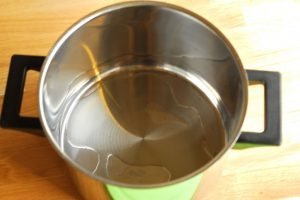 Add the veggies and chili powder, paprika, cayenne pepper, and a little ginger. 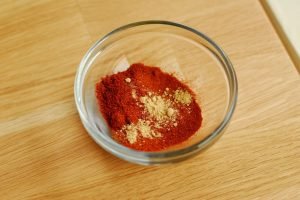 Throw in some minced garlic and Italian seasoning for good measure and cook for 15 minutes over medium heat to sweat the veggies and let them absorb some of the seasoning. 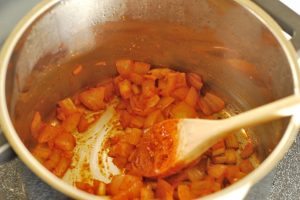 While the veggies are cooking, roughly chop up two pounds of roma tomatoes. Chop them a liiittle more than this. 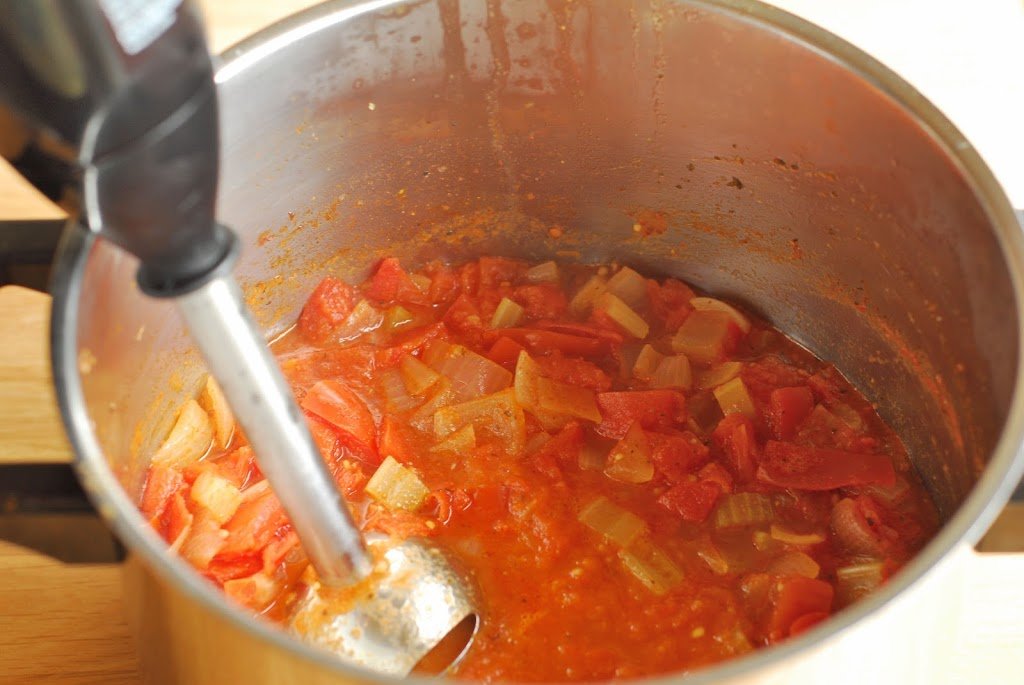 Throw them into the stockpot along with cold water. Bring the mixture to a boil then reduce to simmer for about 25 minutes, or until the liquid has reduced. Take your immersion blender to it…

And puree until there absolutely cannot be not a single chunk left. That’s right. 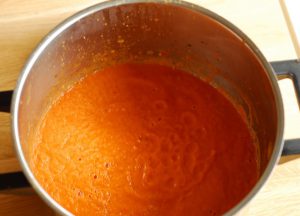 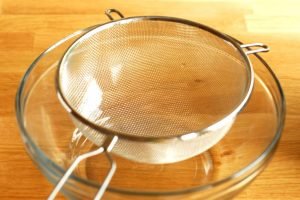 You’ll be left with this in the strainer… 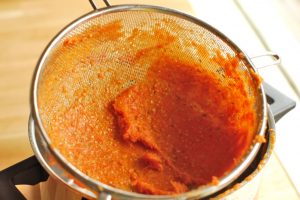 And this in the bowl. 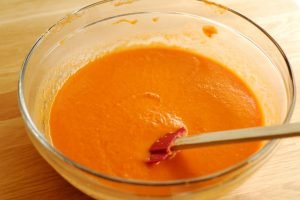 Kind of orange, I know. This whole process made me think companies must dye their ketchup. Or it could just be different tomatoes. Next, pour the tomato mixture into a clean pot and add brown sugar and apple cider vinegar. This is what truly makes it ketchup! 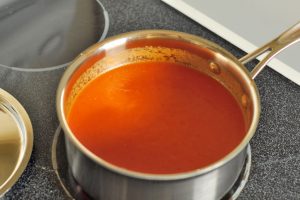 Let it simmer for about 45 minutes, until it’s the right consistency. And then you have ketchup! 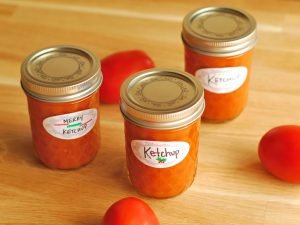 Spread it on a burger, dip some fries in it, or whatever else you spread ketchup on. Or, can it like I did and give it away! It’s a fun, different, and homemade gift. 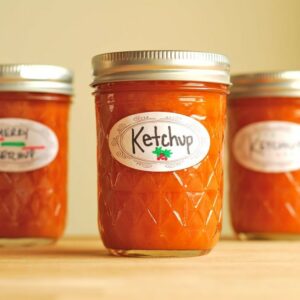 « Previous PostCake in a Can
Next Post » Bleu Cheese Buffalo Burgers