I’ve got a confession to make.

This may or may not have been the first batch of cornbread I’ve ever made that didn’t involve a box of Jiffy.

Okay, it definitely was.

I was inspired to make it the other night when we had dinner at Boyfriend’s parents’ house. Boyfriend’s mom made chili (using my Spicy Chili con Carne recipe! I’m glad I’m not the only one who loves it) and cornbread. She was telling us how she’d been trying to find a cornbread recipe using ingredients she had on hand, but kept running into recipes that included things that were nowhere to be found in her house. What she came up with was fabulous, with pepperjack cheese and fresh corn. I was reminded that Boyfriend truly is his father’s son when his dad remarked “Why are there chunks of corn in it…?” which led to a conversation about cornbread preferences, namely savory vs. sweet. This recipe is a little on the sweeter side, and very simple. Boyfriend thanked me for the lack of kernels, but I can’t say he’ll be safe next time around.

It’s really silly that I had never made it from scratch before. It was so easy! And so much tastier that from a box. Baking it in a cast iron skillet with some melted butter certainly helped sway me to the homemade side.

We had it alongside venison chili, made using my Spicy Chili con Carne recipe. 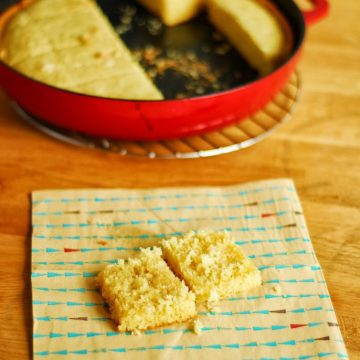