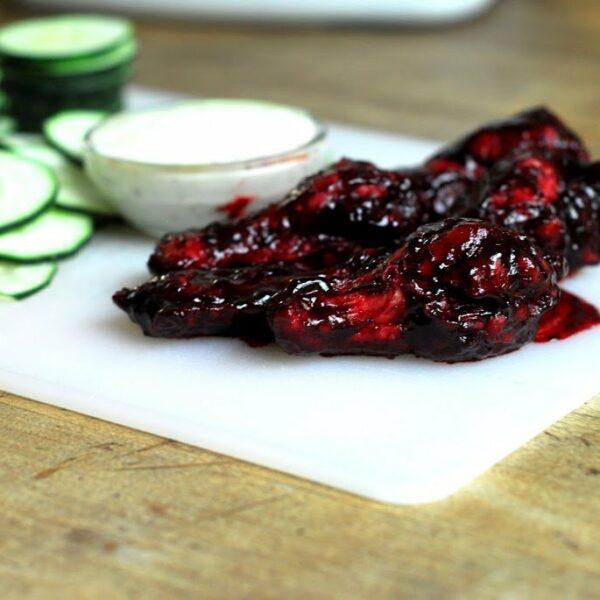 I looove hot wings. Just love and adore them. Even though they are absolutely a football food, I tend to make them well into February (ahem, June…). I just love the sensation of my mouth burning from heat and my nose running because I’m inhaling vinegar. What, you don’t? I’m alone in that? Oh, okay then.

I’ve been experimenting with different wing sauces lately and tested several out on my family. These blackberry chipotle wings were a crowd favorite! The sauce is incredibly simple. Just four ingredients: blackberries, chipotles in adobo, adobo sauce, and brown sugar.

Start by cooking the blackberries over medium-low heat to break them down.

They’ll start to look like this after a few minutes.

Add the chipotles, adobo sauce, and brown sugar, let it cook and break down for a bit, and then grab this handy dandy tool- immersion blender!

You’ll be left with this lovely stuff. Something I’ve learned with wing sauce- a little goes a long, long way.

Now to fry the chicken! I dredge it in a very simple mixture of flour and montreal steak seasoning. I put that stuff on everything! It’s so peppery, delicious, and versatile.

Mix the two together in a gallon-sized plastic baggie.

Add a package of rinsed “party wings” (NOT regular wings)  to the flour mixture in the bag, seal, and shake shake shake until all the wings are well coated.

Add the chicken in batches and fry until they’re floating and golden brown. Remove them to a paper towel lined plate and repeat until all the chicken is fried. Throw ’em in the bowl of sauce and toss them around until they’re well-coated.

Although the traditional veggies to serve with wings are celery and carrots, I think cucumbers go beautifully with the blackberries. But I totally support tradition if that’s the way you wanna go. 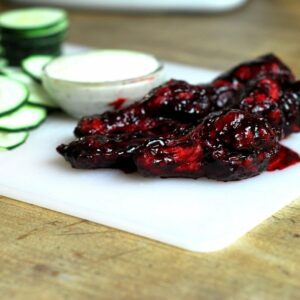