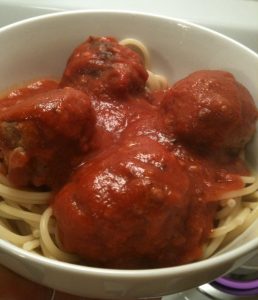 Guess why I am over the top excited right now despite it being 10:30 in the morning and not having had my coffee yet?

My beloved football team, the Oregon Ducks, are going to the National Championship for the FIRST TIME IN SCHOOL HISTORY.

I’m so proud of my team! And that this happened while I was going to school. It’s so exciting! I just love, love, love my ducks! They will be facing Auburn on January 10th in Glendale, AZ. Be sure to have your TVs on.

I will also add that I never mind beating our biggest rivals, the Oregon State Beavers, especially when they act like such bitter jerks!

I also happened to be watching us winning the civil war while at my mom’s annual cookie exchange! Which I won a prize in, by the way 🙂 Best Tasting Chocolate, and I got a cookbook!

It was really fun. It wasn’t as people packed as it usually is- I won’t say that I’m not a little irritated at some people for bailing last minute! It was perfect though, I had a blast. I accidentally had a few too many cups of coffee and a million cookies, so I was a bit of a spaz. And ducked out from head to toe! 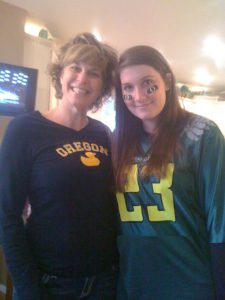 I’m waiting for my mom to e-mail me the pictures I took while making the winning cookies, so until then, try this recipe!

This is my first recipe out of my new cookbook! My boyfriend was craving pasta with meat sauce, so I obliged and made a college student budget friendly version of their meatballs. This was my first time making meatballs so I was a little nervous, but they came out great! We used ground venison instead of beef or their “meatloaf mixture”. It was awesome! And very simple.

Begin by removing the crust off of two pieces of good sandwich bread. I just used plain old white bread, which was bought just for this. We never eat white bread. Tear the bread in to half inch chunks. This is not an exact process, just make ’em small. 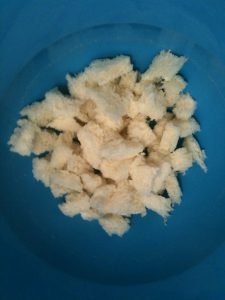 Put them in a bowl with the buttermilk, Italian seasoning, minced garlic, egg yolk, salt, and red pepper flakes. Mash the mixture with a fork until no bread chunks remain. 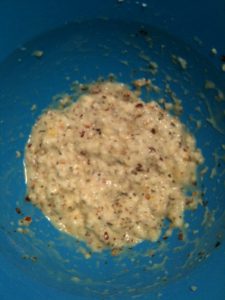 Add the ground venison, cheese, and prosciutto. I didn’t have prosciutto and it is not college budget friendly, but I bet it would be awesome! Mix with your hands until it’s well combined. Shape them into balls depending on the size you like. Mine made 16, but they were relatively small. 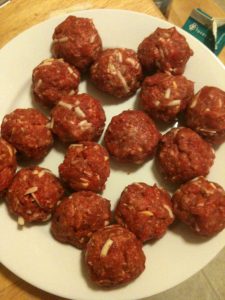 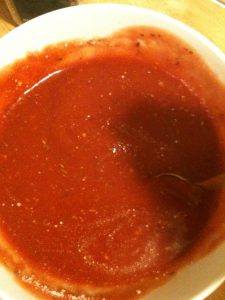 Pour the olive oil into a skillet. When it’s warmed up, place the meatballs in the skillet and brown on all sides. 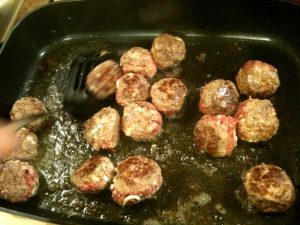 Turn the heat down and add the tomato sauce mixture. Let simmer for about 15 minutes, or until cooked through. 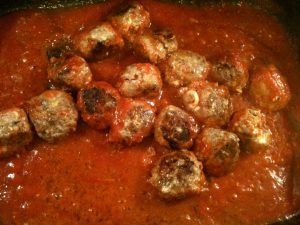 While the meatballs are cooking, start cooking your pasta of choice. We just used spaghetti noodles.

Serve meatballs and sauce over the pasta. Enjoy! We had ours with some awesome crusty bread. 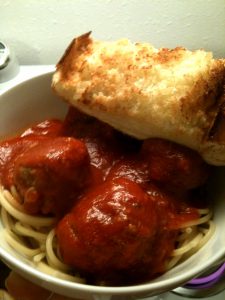 Directions
Combine the bread, buttermilk, Italian seasoning, garlic, egg yolk, salt, and red pepper flakes in a medium bowl and mash with a fork until no bread chunks remain. Add the ground venison, prosciutto, and Romano cheese to the bread mixture. Mix with your hands until thoroughly combined. Divide the mixture into 12-16 portions, based on the size of meatball you want. Roll portions into balls, transfer to a plate, cover with plastic wrap, and refrigerate until ready to use. Combine all the ingredients for the tomato sauce in a bowl, set aside. Heat the olive oil in a skillet. Add the meatballs and cook until browned, about 4 minutes. Pour the sauce on top of the meatballs and cook for an additional 15 minutes, or until cooked through. While these are cooking, cook the spaghetti noodles according to package directions. Serve sauce and meatballs over the spaghetti. Enjoy!