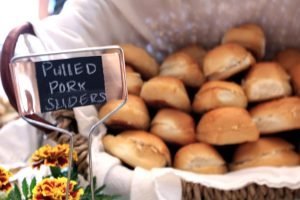 A couple of weeks ago, my mom and I hosted a bridal shower for my good friend Kim, who’s getting married in August. It was so much fun! I enjoy any excuse to plan a party and so does my mom, so we gave ourselves quite the project, which was largely centered around the menu. This week I’ll be posting recipes of things we served at the shower, starting with these pulled pork sliders!

This was a crock pot recipe, of course. It’s a good thing my mom has the most oversized crock pot known to man, because we cooked a 9 pound pork loin. We’re kind of crazy. Luckily, this was pretty simple. Just combine barbecue sauce, Worcestershire sauce, apple cider vinegar, chicken broth, brown sugar, ground mustard, chili powder, lots of chopped onion, minced garlic, Italian seasoning, and vegetable oil in the crock pot, add the pork loin, set to low, and let cook for at least 8 hours. I started mine in the late afternoon and let it cook all night before shredding it the next morning.
When done, shred the pork. My method for shredding is really sophisticated- I take two forks and essentially attack a piece of the meat with them until I’m satisfied with the size of the pieces. It’s a great thing to do when stressed or angry.
Place all the shredded meat in a bowl that allows you to have enough room for aggressive mixing. Combine 1.5 parts cooking liquid with 1 part barbecue sauce and toss with the shredded meat until thoroughly covered. You want this to be ooey-gooey so it drips all over your hands while you’re eating it. Mmmm. 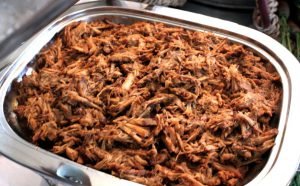 Market of Choice (for those of you who live in Oregon) makes excellent slider buns. We even made a special order for onion slider buns. And then we didn’t have time to go pick them up. However, well-made dinner rolls make great buns when sliced in half. We also served them with cole slaw and chipotle cole slaw. Chipotle cole slaw is simply slaw tossed with mayo, chipotle peppers in adobo, and adobo sauce that have gone through the food processor.
And it was awesome. I loved them, and I generally do not like anything with barbecue sauce. The meat was juicy, the chipotle was awesome, and they were easy to eat but still filling. I’ll definitely be making them for other events I hold in the future. 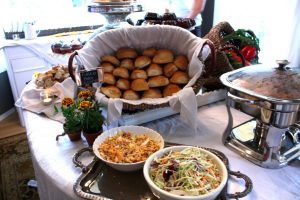 Adapted from AllRecipes
Ingredients
1/2 cup barbecue sauce
Directions
1. In a crock pot, combine all ingredients except the pork and 1/2 cup barbecue sauce.
2. Cut the pork into three chunks and add to the crock pot. Set to low and let cook for at least eight hours or overnight.
3. When done, shred the pork using two forks. Place the shredded meat in a large bowl.
4. In a separate bowl, combine remaining 1/2 cup barbecue sauce and 3/4 cup of the cooking looking. Toss the pork with the barbecue sauce mixture until well coated. Serve immediately on hamburger or slider buns.
Main Dishes Slow Cooker 3.5 - 5+ Hours Pork