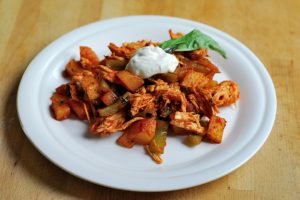 A couple of weeks ago, I came home from work super hungry- the kind of hungry that terrifies Boyfriend- but I had the weirdest combination of foods defrosted and ready in my fridge and hadn’t thought ahead. So of course the logical thing to do was to throw everything in my line of sight together!

Eventually, I came up with this hash. I am SO glad that the perfect situation arose for me to create this dish because it may just be the best weird creation I’ve ever come up with. I’ve been making it for lunch waaay too often and have even made a sweet potato variation.

I started out by seasoning the chicken with kosher salt, pepper, paprika, chili powder, and Italian seasoning. I browned each side in butter on medium high heat before throwing ’em in the oven- that’s the key to making the seasoning stick! 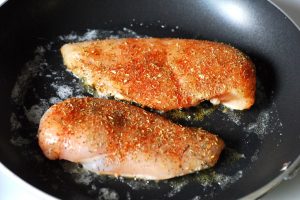 Then I put them in a glass baking dish. Yes, this is a pie dish. This was the closest baking dish I could get my hands on. You gots a problem with that? 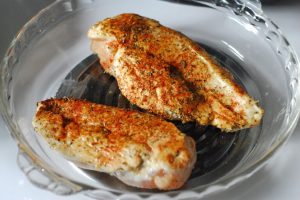 Then I grabbed a bottle of beer. Someone brought this beer to my house and left it and it is DELICIOUS. It’s from MacTarnahan’s Brewing in Portland. Although part of me really did want to just drink it, I know better than to do that with an empty stomach and a hot stove by now. So I dumped it all over the chicken.

Then I squeezed a lime over it all and threw what was left of it into the dish, too. It went in the oven for about a half hour at 400 degrees. 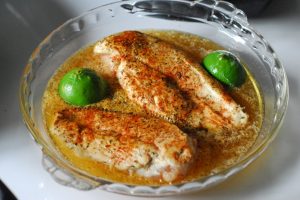 While it was cooking, I worked on the rest of the hash. In the same pan that I browned the chicken in, I started sautéing green bell peppers, jalapeños, and garlic in more butter. 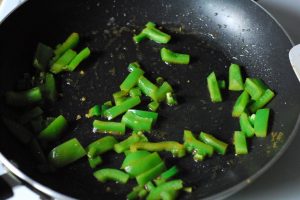 Once they were browned I removed them to a plate and threw some diced potatoes and onions in the pan with a little olive oil and kosher salt. 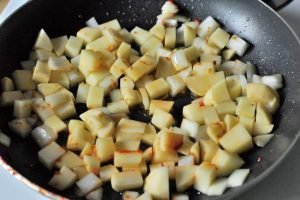 And fried them until the potatoes were golden and beautiful. 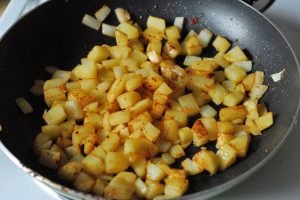 I may or may not have (but probably did) skip a few pictures here. I tossed the peppers with the potatoes and onions in the pan and added tomato paste, basil, and more beer. When the chicken was done, I shredded it by inserting two forks into the breasts and pulling them apart. Then I added the chicken, gave it another toss, and let it cook for a little while so all the flavors could meld and become lovely. 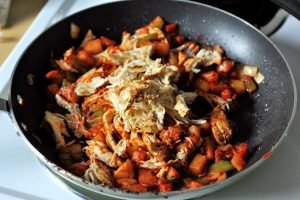 I plated the hash with a little sour cream (which you can totally skip- it’s delicious either way) and dove in. It was so filling and delicious! The jalapeños gave it the perfect spicy kick and all of the flavors complimented each other perfectly. I am truly obsessed with this dish. 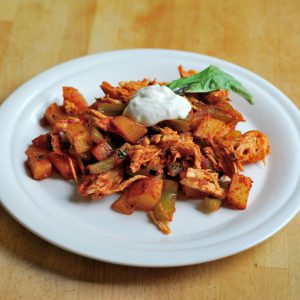 There are so many different variations you could try with this recipe! Like I said before, I’m really digging sweet potatoes in place of the white potatoes. It reheats really nicely so it’s perfect to have for lunch for a few days. I hope you like it as much as I did! 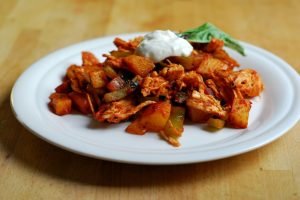