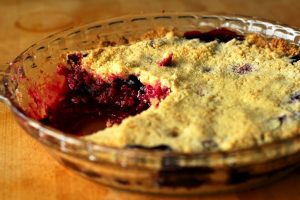 When Boyfriend and I lived in the dorms at the U of O, he loved to go eat at Carson for dinner. Carson was different than other dorm venues because it was buffet style- you payed a flat amount when you entered and then got to eat as much of whatever you wanted. Although he was usually good and just gorged himself with spinach and chicken, he loved when Carson had these berry bar things out for dessert.

To be perfectly honest, I didn’t go bananas for them the way Boyfriend did. They’re a little gooey and a lot a bit too sweet, and it was hard to tell what they were using as the berry. But the kid was obsessed with them, and has been begging me to find a way to make them ever since.

Last week, I stumbled upon this recipe for Berry Crumb Bars and it looked similar to the bars Boyfriend so adored from the dorms. I had a tab open on my computer with this recipe for days before I finally broke down and made them for him. Any baked good with apples or berries makes him keel over with excitement, so even if these didn’t turn out like the dorm bars, I knew he’d love them.

I made them more in pie form than in bar form, but it turned out great! What we really needed was some ice cream, but even plain it was fabulous. 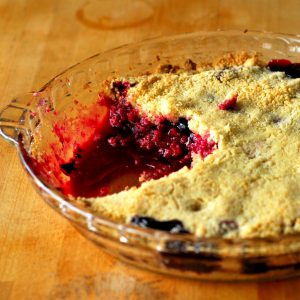 I used a three berry mix instead of just raspberries because that’s what I keep in my freezer, but any berries would be delicious. Or any fruit really. Throw some peaches in there! I bet it would be great. 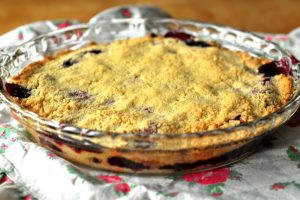 Directions
1. Preheat oven to 375 degrees. Grease a glass pie dish with cooking spray.
2. Combine the berries, 1/4 cup sugar, and cornstarch. Set aside.
3. In your standing mixer with the whisk attachment or by hand, combine the 1/2 cup sugar, flour, baking powder, salt, and cinnamon. Add the butter and egg and mix until just combined- mixture will be crumbly.
4. Press half of the flour mixture into the bottom of the pie dish. Spread the berry mixture over the pressed crumbs. Sprinkle the remaining flour mixture over the berries evenly.
5. Bake in the preheated oven for 35-40 minutes, or until edges are golden brown. Serve with vanilla ice cream.