These cinnamon rolls were SO GOOD. They were literally painfully delicious. I made them in the late afternoon, and my evening ended up looking like this:

I knew that the bacon-cinnamon-maple combination would be good, but I really didn’t know it would be this good. It was almost impossible to walk away from. This was especially dangerous because there’s only two of us- we weren’t forced to make a polite attempt at sharing. A blessing and a curse.

How to Make Bacon Cinnamon Rolls

This is the cinnamon roll filling. There are few things more glorious. I use a simple combination of softened butter, cinnamon, and brown sugar.

I rolled out the dough, spread out the filling, and laid on strips of bacon. You could definitely crumble up the bacon and sprinkle it on, but I wanted thick strips rolled up in the center. Either way, you’re still getting bacon.

Then roll it up long ways (“hot dog style”) cut it into inch and a half wide pieces, and arrange in a greased baking dish. It’ll getcha twelve glorious bacon cinnamon rolls. Cover it up with saran wrap and let ’em rise until they’re squishing together a bit in the dish.

They’re so pretty. Looking at these pictures while I’m writing this is making it hard to not jump back into the kitchen and get these going. Maybe I’m not quite totally “sworn off” of them…

Of course, it is essential to enjoy these with a giant cup of coffee. It’ll help delay the sugar coma long enough to squeeze in one more cinnamon roll.

Side note: the roll recipe I used for the dough part of the cinnamon rolls makes killer dinner rolls. The best we’ve ever had. It’s really simple and I now make them routinely with dinner. I highly recommend it! If you’re feeling feisty, maybe add some homemade Irish cream to that coffee? Christmas morning calls for it.

P.S. Don’t forget to pin this recipe so you remember it for those special occasion mornings! 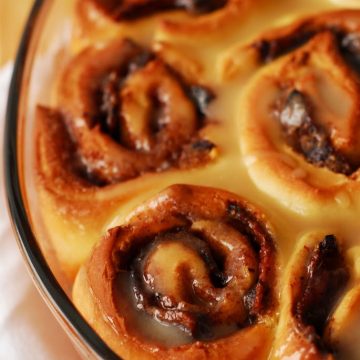